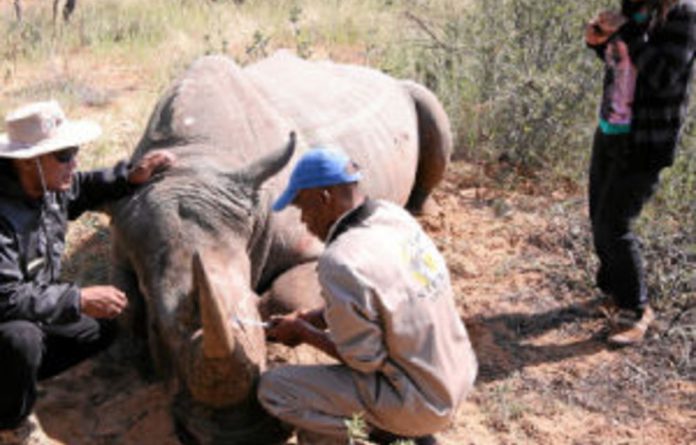 A statement to police that led to the arrest of the leader of an alleged Thai rhino poaching syndicate exposes the sleaze in the officially sanctioned shooting of this endangered species, with prostitutes used in “canned hunts”.

Evidence of the syndicate’s modus operandi emerged this week from a statement made to the police that led to the recent arrest of its leader, Chemlong Lemtongthai (43). The syndicate is alleged to have traded at least 40 rhino horns and placed an “order” for 50 more to be supplied in the next few months.

The evidence brings to light a growing trend among organised syndicates that are using hunting permits to export illegal rhino horns to the Far East. Almost a quarter of the 222 rhinos killed in South Africa this year have been “hunts” authorised by provincial conservation authorities.

A statement made to the police by Tim Smith* who worked with the syndicate, led to the arrest of Lemtongthai and five Thai “hunters” in Edenvale on July 9. He described how Lemtongthai and his sidekick, Punpitak Chunchom, paid millions of rands in cash for live rhinos.

Smith claims in his statement to the police that Marnus Steyl, a wildlife trader based in Brits, North West, bought the rhinos from auctions and private owners.

Steyl is then alleged to have moved the rhinos to a farm in North West and soon after that they would be “hunted”, in contravention of regulations that the animals must be given time to acclimatise.

Usually friends were called in, or Thai women working as strippers and prostitutes were paid R5 000 to do the job. They were provided by a Midrand, Gauteng, woman wanted in Thailand for human trafficking. Their passports and fingerprints were needed to complete the necessary hunting permits and Convention on International Trade in Endangered Species paperwork.

Smith claims in the statement that “once the fingerprinting is done, the ladies are taken out to Steyl’s farm, where they are made comfortable and then introduced to the professional hunter.

“[He] would show them the rifle and even take the girls to a quiet spot where they could let off one or two shots so that they can later say that they have at least fired the weapon.”

An official from North West Parks would be called out to witness the “hunt”, measure the horn, scan the microchip and put the details in the professional hunting register. “I believe he would also get a kickback for being so cooperative,” Smith’s statement said.

After the rhino was dehorned and the carcass chopped up for delivery to a butcher in Vryburg, where the meat was sold off in boerewors and burgers, the horn was taken to a taxidermist who mounted it on a shield to look like a hunting trophy.

“The trophy is just a cover for getting the horn out of South Africa and into Asia. Once in Asia, it obviously would enter the black market as rhino horn for ‘medicinal purposes’. The person allegedly ‘hunting’ the rhino would never see the animal or its horn again.”

Lemtongthai argued with some of the rhino traders about the prices they were charging upfront, saying he would prefer to pay after the horns had been weighed, Smith’s statement said.

He felt he had paid too much for two rhinos shot in September or October last year — about R575 000 for one and R450 000 for the second — and told Smith that in future it would be done in a different way. “I remember his actual words: ‘We shoot, we cut, we weigh, then pay.'”

Smith said he decided to expose the syndicate after discovering an order to Steyl for 50 more rhinos from Lemtongthai’s company, Xaysavang Trading Export-Import Company.

“The receipt of this order made me realise he is just hellbent on killing as many rhinos as possible, for no other reason than harvesting the horn,” Smith said.

Xaysavang Trading Export-Import Company is based in Laos, a tiny country bordered by China, Thailand, Burma, Vietnam and Cambodia. It openly sells monkeys to a Chinese laboratory for use in experiments and in July 2009 was linked to the illegal sale of ivory and 18 kilograms of rhino horn in Kenya.

According to forensic investigator Paul O’Sullivan, who assisted in Lemtongthai’s arrest, he is number two in the syndicate, which is headed by a Vietnamese resident, Vixay Keovang, also known as Vixay Xaysavang.

Before it moved into rhino poaching in South Africa the company traded in large quantities of lion carcasses and bones supplied by breeders in the North West and the Free State. Days before Lemtongthai’s arrest, Chunchom, his man on the ground in South Africa, was deported for the illegal possession of lion claws and teeth.

Steyl and the professional hunters have not been charged. Steyl did not respond to questions from the Mail & Guardian.

State okayed ‘hunts’
Recent figures indicate that at least 60 of the 222 rhinos killed in South Africa this year were “hunts” authorised by provincial conservation bodies.

The department of environmental affairs did not answer the M&G‘s questions about the number of permits that had been issued for rhino hunts this year.

When the M&G first reported, in July 2008, that wildlife traffickers were laundering hunting permits to smuggle horns to the Far East, figures available showed that 205 rhino hunting permits had been issued in 2006.

Hawks spokesperson McIntosh Polela said this week that the National Joint Operational and Intelligence Structure, a collaborative task team set up in May to deal with rhino poaching, had so far focused on the Kruger National Park because of the high density of its rhino population and because it made up 80% of poaching incidents. The Kruger would remain the focus “until we get things under control”, but the task team was spreading out to provinces affected by rhino poaching activities.

Cases included those of Chemlong Lemtongthai, the alleged leader of a Thai syndicate, and an alleged Limpopo syndicate headed by hunter Dawie Groenewald, Polela said.

Groenewald and 10 others were arrested last September. They face charges that include fraud, corruption, assault, defeating the ends of justice and contravening the Organised Crime Act.

Despite the charges, Limpopo conservation officials have issued Groenewald with 12 rhino hunting permits in recent months and at least 17 transport permits.

The permits came to light after the Democratic Alliance’s Limpopo leader, Desiree van der Walt, posed questions to Pitsi Moloto, the province’s environment minister. Moloto said the magistrate had prohibited Groenewald from engaging in any activity related to rhinos on his farm, but that “the period set by the magistrate expired and he was allowed to conduct his business as usual”.

Last week Groenewald offered to buy nine white rhinos from a private sanctuary in Limpopo. He backed down in the face of an outcry from conservationists and the rhinos were sold to Mpumalanga game rancher John Hume. Paul O’Sullivan, an investigator who worked with the anti-poaching task team to expose Lemtongthai and the Xaysavang Trading Export-Import Company, admitted that a link existed between Groenewald and the Thai syndicate.

In response to questions about whether Groenewald was supplying rhinos for the Thai syndicate’s “canned hunts” O’Sullivan said: “Yes, he’s at it as well, just with another syndicate that also traces back to Lemtongthai’s boss.”

Groenewald’s lawyer, Thomas Grobler, said Groenewald denied any connection with Lemtongthai, the Xaysavang Trading Export-Import Company, or its owner, Vixay Xaysavang. Polela also said there was no indication of a link.

* Name has been changed

In a previous version of this article, the M&G reported that a statement by a Thai Airways manager led to the arrest of members of a rhino-poaching syndicate. The person was not a manager at Thai Airways, but did receive information from employees at the airline.