Malawi riots a harbinger of change 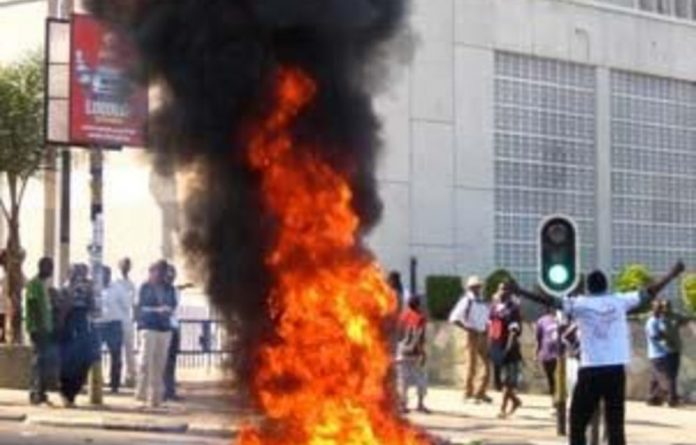 The deadly anti-government riots against President Bingu wa Mutharika in Malawi are a signal that public anger will not be silenced in this impoverished Southern African nation, analysts say.

“What we are seeing now has been bottled up but people expected is to see the state changing,” said Malawi Human Rights Commission chairperson John Kapito. “Now there is a revolt.”

“There is a message ringing out there that the people are not happy and Malawi is changing.”

Malawi has been independent for 47 years and the unrest is the worst since 1994 which saw the advent of democracy and an end to the three decade dictatorship of Kamuzu Banda.

“The behaviour of the current leader is similar to that of the late Kamuzu Banda and I think he is reminding Malawians what we went through … That’s why I think we are standing up,” said Kapito.

Mutharika has faced growing anger over chronic fuel and foreign exchange shortages, refusing to listen to critics and reining in freedoms, prompting former colonial ruler Britain to cut aid days before the protest.

“Malawians spoke with a loud and united voice last Wednesday and government would be fooling itself if it does not heed the issues raised,” wrote the Nation, calling for genuine dialogue.

“After the emotional protests, the bloodshed and regrettable 18 deaths this week, one expects government to wake up from its slumber and acknowledge that the country is in serious problems.”

The upheaval follows other recent unrest in Africa such as deadly Uganda protests against fuel and food prices, pro-democracy protests in Africa’s last monarchy Swaziland, and Senegalese riots over electoral reforms seen as a succession-plan for the president’s son.

Diminishing freedoms by Mutharika were symptomatic of a turnaround by some of the continent’s leaders to non-democratic practices, said Olmo von Meigenfeldt of African democracy think-tank Idasa.

However Von Meigenfeldt said he hoped that African leaders would note that “citizens will not tolerate repressive and dictorial leadership forever.

“I’m not saying that Malawi is repressive and dictorial per se but indeed there has been an infringement of freedoms, clearly, and people are responding to that.”

Kapito said Malawians had sent a strong signal to leaders who believed that they could only be removed by the ballot box and trampled on peoples’ rights without being held accountable.