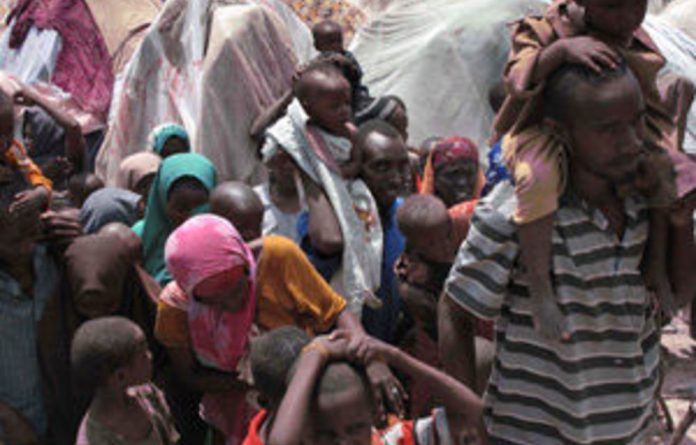 A catastrophic drought in the Horn of Africa demands “massive and urgent” action from the international community, the UN food agency’s chief said on Monday as emergency talks opened on the crisis.

The worst drought in 60 years has wreaked havoc on war-torn Somalia and parts of Djibouti, Ethiopia, Kenya, Sudan and Uganda, increasing pressure on world leaders to boost aid for millions of people on the brink of starvation.

“The catastrophic situation demands massive and urgent international aid,” said Jacques Diouf, head of the Food and Agriculture Organisation which is hosting the meeting at its headquarters in Rome.

“It’s imperative to stop the famine,” said Diouf, adding that $1.6-billion were needed for the next 12 months.

UN Secretary General Ban Ki-moon has called on donor countries for that amount in aid for two regions of southern Somalia declared famine zones by the United Nations last week.

FAO has warned the situation will deteriorate if nothing is done now. And despite recent EU fund pledges, aid agencies say more needs to be raised, and fast.

France, which called the meeting as current head of the G20 group of leading world economies, said the international community had failed to ensure global food security.

‘Life or death’
“If we don’t take the necessary measures, famine will be the scandal of this century,” Le Maire said, adding: “Our meeting is a question of life or death for tens of thousands of people.”

UN officials say famine over the last few months killed tens of thousands of people, forcing desperate survivors to walk for weeks in search of food and water.

Live Aid organiser Bob Geldof joined activists in urging the international community to come up with more aid relief for famine victims, in a letter published on Monday ahead of the meeting.

Geldof and other celebrities, such as actress Kristin Scott Thomas and director Richard Curtis, attacked countries such as France, Italy, the Arab States and Germany.

They accused them of having “so far given miniscule amounts of money to prevent people dying from hunger”.

Aid agencies have also had trouble delivering supplies to the epicentre of the famine in southern Somalia, which is controlled by the al-Qaeda-inspired Islamist group al-Shabaab who last year declared it off-limits to foreign agencies.

The Rome-based World Food Programme (WFP) said it would begin airlifts of food aid to the Somali capital Mogadishu on Tuesday.

There would also be airlifts to the Ethiopian town of Dolo on the border with Somalia and to the town of Wajir in northern Kenya, WFP’s head Josette Sheeran said.

The International Committee of the Red Cross said Saturday it had already managed to distribute 400 tonnes of food in southern Somalia, enough for 4 000 families or about 24 000 people.

The meeting will address not only immediate aid, but long-term solutions for the crisis — such as assistance to livestock farmers, the introduction of more drought-resistant crops and measures to control food price volatility. – AFP