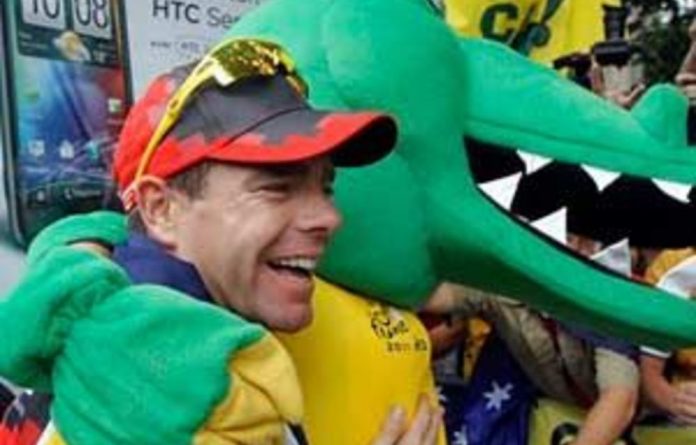 Cadel Evans sealed an historic first Tour de France victory for his native Australia after the 21st and final stage of the epic race on Sunday.

Britain’s Mark Cavendish, of HTC-Highroad, took his third consecutive stage win on the Champs Elysees where Evans, who rides for BMC, maintained his lead of 1minute 34seconds over Andy Schleck of Luxembourg who rides for Leopard.

In third place was Frank Schleck (31) who finished 2:30 behind to make sure the Schlecks make history as the first brothers on the race podium.

Cavendish has now won five stages this year, taking his tally to 20. His third consecutive stage victory on the final stage of the race means he becomes the first Briton to secure the green jersey for the race’s points competition.

The Isle of Man rider became the first Briton to step on to the podium since 1984 when Scotland’s Robert Millar took the King of the Mountains jersey on his way to a fourth place finish.

Spaniard Samuel Sanchez, of the Euskaltel team, won this year’s polka dot jersey while Frenchman Pierre Rolland, of Europcar, won the white jersey for the best placed rider aged 25 and under.

It was 30 years ago that pioneering Australia’s Phil Anderson paved the way for future generations by becoming the first non-European to wear the Tour de France yellow jersey.

Evans had already been Australia’s most successful rider on the world’s premier cycling event thanks to two runner-up places in 2007 and 2008.

Two years after becoming Australia’s first ever world road race champion, Evans made history in convincing fashion a day after dispossessing Schleck of the yellow jersey after the 20th and penultimate stage time trial.

“What can I say? I’ve been dreaming of winning the Tour de France for the past 20 years, ever since I was a 14-year-old,” said Evans after stepping off podium where pop star Tina Arena sang Advance Australia Fair in his honour.

Schleck held a 57sec lead on Evans following the final mountain stage to Alpe d’Huez, won by Rolland, on Friday and was confident of taking the yellow jersey all the way to Paris.

However the Luxembourg climbing specialist fell victim to his comparatively inferior time trialling skills on the challenging 42.5 km course around Grenoble on Saturday.

Evans slashed his deficit to just 36sec by the 15km mark of the individual race against the clock, and by the halfway point he had become virtual leader.

In the end the Australian beat Schleck by 2:30, dropping the Luxemburger to second by 1:34.

Schleck, who had won the white jersey from 2008-2010, has now come runner-up for the third consecutive year having finished second to Alberto Contador in 2009 and 2010.

“Cadel deserved to win,” said Schleck, although has has pledged to return to win next year. “I wasn’t far behind, but I was still behind and that’s what matters.”

Contador, the three-time reigning champion, endured a disappointing race before finishing fifth overall at 3:57 adrift of Evans and one place behind France’s Thomas Voeckler, fourth at 3:20.

Voeckler had the hosts drreaming of a first home victory since Bernard Hinault in 1985 when he took the yellow jersey on stage nine and held it for 10 days.

But despite heroically defending his lead by only 15sec on the second of three stages in the Alps, the 19th stage to Alpe d’Huez the following day proved fatal for the Europcar rider.

Voeckler’s fourth place, however, is the best French finish since Christophe Moreau finished fourth in 2000.

“It’s been a wonderful Tour,” said Voeckler, who also wore the yellow jersey for 10 days in 2004.

“Obviously I’m a bit disappointed. I got close to the dream, but that’s what it will remain.” — Reuters