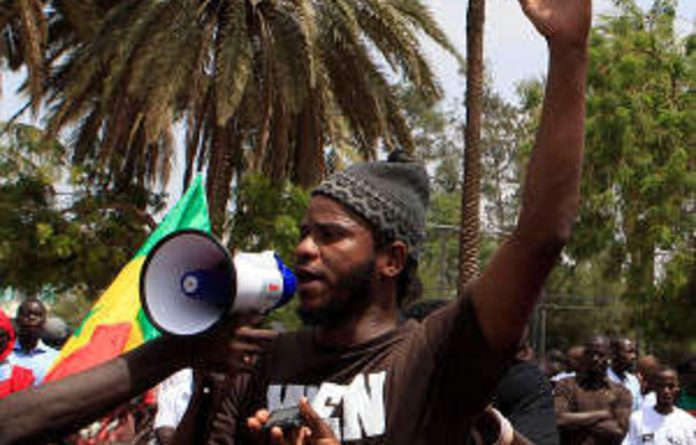 Senegalese rapper Thiat, a leader of “Fed Up”, a movement started by a group of rappers in protest against President Abdoulaye Wade’s regime, was being held by police for questioning on Tuesday, the group said.

Thiat, whose real name is Cyrill Toure, was summoned for questioning by the police’s Criminal Investigation Division (CID) at about 5pm on Monday night, for unknown reasons, said “Fed Up” co-ordinator Fadel Barro.

“We still don’t know why he was summoned,” said Barro.

Thiat’s summons was widely reported in local media, some of whom said he had been taken into custody, which could not be confirmed.

Many speculated that the rapper, who is famous in the country, was called for comments he made during a rally held Saturday by opposition and civil society organisations.

The gathering was held to demand Wade ditch controversial plans to run for a third term in office in February 2012 elections.

Launched in January, “Fed up” has become the symbol of protests against Wade’s regime, crippling power cuts, corruption and other social ills.

“Wade must declare that he will not be a candidate … The constitution and his age do not allow him to run for office,” the rapper said in a recent interview with Agence France-Presse (AFP).

The 85-year-old president was first elected in 2000 after decades as an opposition leader and re-elected in 2007.

Although only two terms are allowed, his party argues this should be counted from his last election as a constitutional revision dropped the presidential term from seven years to five. — AFP