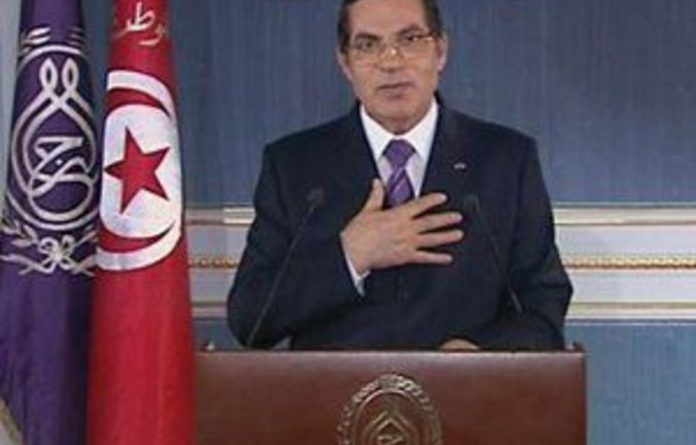 They include Ali Seriati, Ben Ali’s former security chief, and Imed Trabelsi, Leila’s nephew and one of the most reviled men from the former ruling clan.

A total of 35 people are facing charges but only the 23 Ben Ali associates arrested in January appeared before the court on Tuesday.

Fourteen men in handcuffs and nine women wearing white full-length robes entered the tiny courtroom, which was packed with journalists and lawyers.

The 23 were arrested and found to be in possession of large sums in foreign currency as they tried to flee the country on January 14, the day Ben Ali and his wife fled into exile in Saudi Arabia after a weeks-long popular revolt.

Seriati, who is suspected of having planned a series of attacks aimed at fanning nation-wide chaos, told the court that fake passports were made at the presidential palace specifically for Ben Ali’s immediate family.

The 23 defendants have all been held at the Aouina military base in Tunis since their arrest.

“You tried to flee the country on January 14 in possession of foreign currency and jewels,” court president Faouzi Jbelli said, before reading out the charges against each of the accused.

Imed Trabelsi, wearing a white polo shirt, rejected the charges, denied that he had sought to flee the country and said the money in his possession came from “legal activities”.

The prosecution said Imed, who was already sentenced to four years in jail in June for drug possession, had 36 watches and 5kg of jewellery when he was nabbed at the airport.

Since his escape to Saudi Arabia, Ben Ali has already been convicted and sentenced twice, in trials held in his absence.

On July 4, a Tunis court sentenced him to 15 and a half years in jail for possession of arms, drugs and archaeological artefacts — and fined him 54 000 euros.

And in June, Ben Ali and his wife were sentenced to 35 years in prison and fined $65-million for misappropriating public funds after police found large sums of cash and jewellery in their palace.

Ben Ali denounced his first conviction as a “parody of justice” and “political liquidation” in a statement issued last month.

But he and his entourage face possible legal proceedings in around 180 other cases.

The National Health Laboratory Services finally admitted to a bottleneck last week, after denying there were any issues since April. According to the service, the backlog of 80 000 tests started in the first week of May
Read more
Advertising
Continue to the category