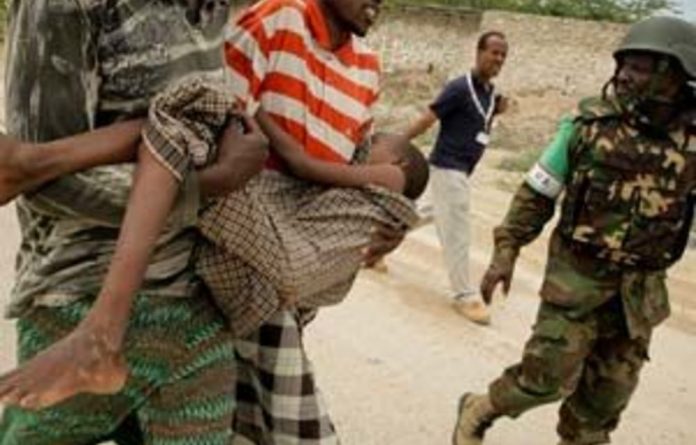 The United Nation’s World Food Programme readied aircraft with food aid bound for the Somali capital Mogadishu amid intensifying relief efforts for millions hit by drought across the Horn of Africa region.

Hopes that the aircraft could take off on Tuesday were dashed by last minute bureaucratic hurdles in Kenya.

“The aircraft are loading with the hope that they can take off on Wednesday,” said WFP spokesperson David Orr.

“This will be the first of series of flights — once they start, they will just keep coming and coming in an ongoing operation,” he added.

The flights have only a narrow timeframe to fly, offload their critical cargo and then return to Nairobi, Orr added, and a wait for clearance permission in Nairobi had delayed the mission.

An estimated 3.7-million people in Somalia — around a third of the population — are on the brink of starvation and millions more in Djibouti, Ethiopia, Kenya and Uganda have been struck by the worst drought in the region in 60 years.

The UN last week officially declared a famine in two regions of southern Somalia, and on Monday called for “massive” action to support 12-million people affected by drought.

UN Secretary General Ban Ki-moon on Tuesday called the leaders of Saudi Arabia, Kuwait and Qatar to urge them to make hefty donations, a statement said.

He also called the foreign minister of the United Arab Emirates, Sheikh Abdullah bin Zayed al-Nahayan, to ask him to respond to the UN appeal for emergency funds, it added.

Relief efforts will be the focus of a donor and aid agency meeting in Nairobi on Wednesday, as discussions continue on how to tackle the crisis, including delivering aid in areas held by Somalia’s Shebab Islamist insurgents.

UN officials say the drought has killed tens of thousands of people in recent months, forcing hundreds of thousands to walk for weeks in search of food and water.

At an emergency meeting on the Horn Africa drought in Rome Monday, officials said the UN had received about $1-billion since launching an appeal for the region in November 2010 but needs a billion more by the end of the year to cope with the emergency.

The World Bank on Monday pledged more than $500-million, with the bulk of the money set to go towards long-term projects to aid livestock farmers while $12-million would be for immediate assistance to those worst hit by the crisis.

However charities have slammed low aid pledges and say not enough is being done.

Aid agency Médecins Sans Frontières (MSF) warned in a statement on Tuesday that the situation remains dire for more than 387000 mainly Somali refugees now in the Dadaab camp complex in eastern Kenya.

Thousands of refugees continue to arrive but are not receiving basic support, MSF said.

“Whilst many of these refugees remain on the outskirts of the camps they are still not receiving adequate assistance,” MSF said in a statement.

“Delays in registration and access to food, water and shelter are tipping them over the edge.”

The WFP flights will be carrying around 14 metric tonnes of high energy food aimed to combat malnutrition, especially for children.

Flights will also go to the Ethiopian town of Dolo on the border with Somalia and to the town of Wajir in northern Kenya.

Other organisations have already made relief deliveries, with the UN children’s agency airlifting five tonnes of aid into rebel-held part of southern Somalia earlier this month.

The International Red Cross on Sunday said it had handed out 400 tonnes of food in drought-hit areas controlled by the hardline al-Shebab insurgents, the first ICRC-led drops into such areas since 2009.

The WFP was forced to pull out of southern Somalia last year after a series of threats and curbs on its operations from al-Shebab rebels, but it has continued to operate in Mogadishu and central and northern regions of the war-torn country. — AFP