The call of the cleaver 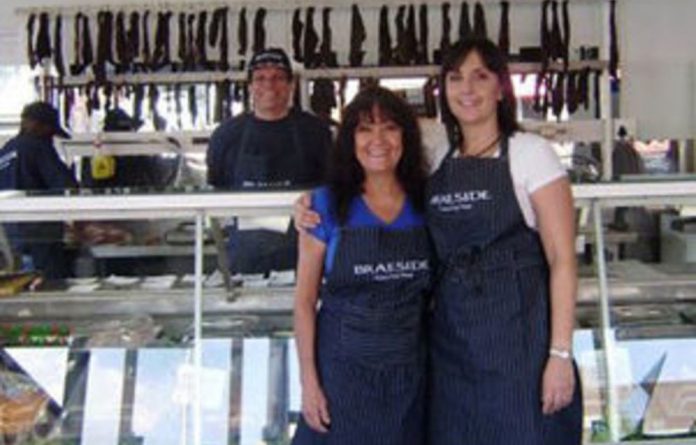 Caroline McCann is an interesting woman. Ask anyone who’s a fan of her Johannesburg-based business, Braeside Butchery. SAB Eat In Awards judge Anna Trapido describes her ‘nicely wacky’ saying that, on top of sourcing the best, ethically reared, grass-fed meat, she regularly shoots venison on weekends, offers braai classes to local lasses and is even in the process of breeding her own turkeys.

She may be comfortable wielding a cleaver now, but a few years ago she had no idea. Caroline was originally a labour law consultant, but after years in the occupation, she admits that it left her feeling burnt out.

During a time of career uncertainty, Caroline’s aunt decided to sell her butchery, Braeside, and move to England. ‘I remember my aunt’s words distinctly,’ reminisces Caroline. ‘She said, “Caroline, buy the butchery. You can sell it after a year. You’ll make back your money, but at least you can take out the time you need.”‘

Nine years have passed since Caroline’s aunt’s proposal, and she’s still going strong. Laughing, she says, ‘Every year in May, the month I first bought the business, she phones me up and asks me, ‘So, have you had enough time out yet?’

Disenchanted by the industry
Caroline admits that her entry into the profession was a trial by fire. ‘At the beginning I didn’t know the difference between a topside and a rump,’ she says. ‘I had a hands-on crash course of six weeks during which the block men teaching me became very frustrated!’

It wasn’t up until four years ago, however, that Caroline admits she finally came into her own as a butcher. ‘I asked the question, “Why is the beef that I have the same as everywhere else?”‘ she says. ‘I found out exactly how the animals were treated and became completely disenchanted. I became determined not to sell anything unless I knew how it was being treated and how it arrived at my shop.

Nose-to-tail eating
On top of Caroline’s dedication to sourcing grass-fed, ethically treated cattle, she’s also well known as an advocate of so-called nose-to-tail eating. ‘The most difficult part of being a butcher is convincing people that an animal isn’t grown with 79 fillets and two sirloins,’ she says. ‘Selling those secondary cuts in really difficult.’

Asked what her favourite secondary cut is to prepare for family and friends, she immediately replies, ‘My absolute best is a Sunday roast brisket. It has to be grass-fed of course, because that’s where the flavour comes from. I drizzle it with a bit of olive oil, a crack of black pepper and some Maldon sea salt and slowly roast it at 140 degrees for six to eight hours. It absolutely falls apart when it’s done.’

It’s this love of secondary cuts that’s made her very popular with local restaurants. Popular clients include Allistaire Lawrence from Roots and Marthinus Ferreira from DW Eleven-13. She’s also especially fond of the folks at Bice, often walking with them through her cold rooms and brainstorming about the best possible cuts for dishes.

Always learning
This close relationship with restaurants is something that stands her in good stead with her clients. ‘I’m constantly asking chefs to teach me more so that I can share their fabulous recipes with people coming into the shop,’ she says. ‘I can have the best meat in the whole wide world and scream it from the rooftops, but it means nothing if you don’t know how to prepare it.’

This eagerness to go the extra mile for clients has seen Caroline meeting some pretty outlandish demands throughout the years. ‘Probably the strangest request I’ve ever had was during the World Economic Summit,’ she reminisces. ‘One of the kings of the UAE wanted lambs that were no more than seven days old, and he wanted them whole with the head on, but gutted and with the skin off.’

Caroline succeeded in tracking down a farmer who would oblige, but only after she promised him that she’d assist him in butchering the lambs.