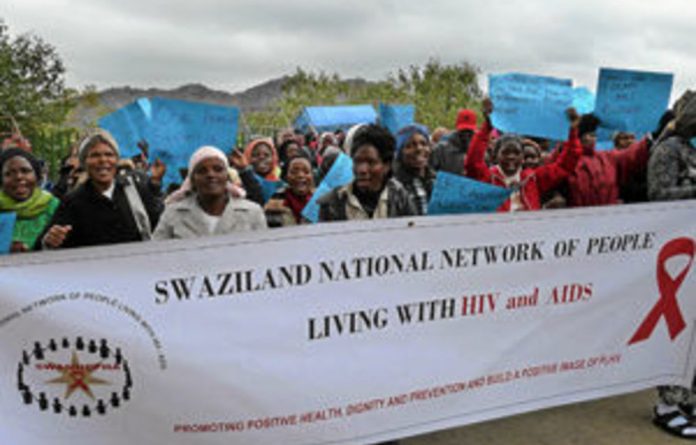 Hundreds of people with HIV took to the streets of Swaziland this week to protest over poor health service delivery and a reported shortage of antiretroviral (ARV) treatment.

The group, mostly women who were bused into the capital Mbabane from outlying rural areas, toyi-toyied outside the finance and health ministries to demand more money for the country’s ailing health service.

Swaziland has the highest HIV rate in the world, with one in four adults infected and 42% of pregnant women attending antenatal care centres testing positive.

Although the country receives millions of dollars of foreign aid money to fund its free ARV-treatment programme, a leading HIV charity claims health service delivery has been badly affected by the country’s economic situation and says ARV supplies are running short.

Thembi Nkambule, the director of the Swaziland Network of People with HIV and Aids, told the Mail & Guardian: “Our members are telling us that they are getting only seven days of tablets rather than a month’s worth and so have to travel to the clinic four times. It is hitting their pockets when they are already poor.

“Now, some people are saying they have to meet their immediate need, which is food, and so are not going to hospital. As a result, some are stopping their medication, which is a big worry,” Nkambule said.

The government’s National Emergency Response Council on HIV/Aids has been badly hit by the country’s liquidity problems and has received only a small portion of its usual funding. This has covered staff costs but has left operational bills unpaid.

Nkambule said that because of this several local nongovernmental organisations were closing down, leading to a reduction of community-based testing and support networks. Some clinics were offering reduced patient services because nurses were striking over unpaid wages.

Nkambule was sceptical about government assurances that there were sufficient ARV supplies. “There are lots of mixed messages about drugs running out and we are worried people may give up on their medication. That would have a bad impact on them because we know treatment is linked to prevention,” Nkambule said.

Siyabonga Sithole (31) is HIV-positive and lives in a rural homestead at Makhonza Zombodze, 20km from the small town of Nhlangano in the southwestern corner of Swaziland. He said he had travelled the 160km to Mbabane to take part in the protest because he wanted the government to know how bad the situation was.

“People are losing hope,” he said. “You can hear them on the corridors of the clinics saying: ‘I am better off not doing an HIV test, I am better off not taking ARVs, I would rather die like this than start something that is not going to be sustained’.”

Sithole confirmed recent reports in local media that some ARV patients were eating cow dung to line their stomachs when they had no food and had to take their ARVs.

He said: “This is something we have seen. People who are taking their treatment feel so hungry, they are mixing cow dung with water to make a thin porridge so they can at least have something in their stomach before they start taking their medication.”

Meanwhile, as the HIV protesters, many wrapped in blankets to keep out the biting cold, delivered their petitions under the watchful eye of riot police, the country’s labour unions were in court fighting for the right to stage their planned three-day strike, which the government had blocked with an injunction at the eleventh hour on Tuesday.

The Trade Union Congress of Swaziland is opposing the public-sector salary cuts and retrenchments that the government has outlined as part of a fiscal roadmap to repair its crisis-hit economy.

After nearly a day’s deliberations, industrial court Judge Dumsani Mazibuko finally dismissed the government’s application to ban the strike. He ruled in favour of the trade-union body and said it had given the authorities sufficient notice of the protest action formally announced on June 23.