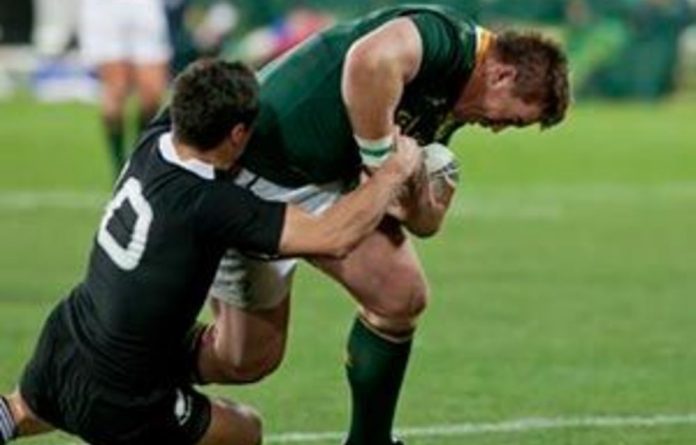 The All Blacks opened their Tri-Nations title defence with a 40-7 hammering of the injury-ravaged Springboks on Saturday, falling just four points short of a record test victory over the South Africans.

New Zealand, favourites to win the World Cup when they host it later this year, ran in six tries. Wingers Cory Jane and Zac Guildford both grabbed a brace with prop Wyatt Crockett and replacement back Colin Slade also crossing.

All Blacks flyhalf Dan Carter added 10 points from two penalties and two conversions to edge back ahead of England’s Jonny Wilkinson in the duel for the test points world record on 1 204.

World champions South Africa, who scored their one try through skipper John Smit, put in an improved performance after being embarrassed by the Wallabies last week but were simply no match for the power and pace of the home side. With more than 20 frontline players recuperating back in South Africa, the world champions just managed to avoid the ignomy of a worse defeat than the 52-16 drubbing they suffered in 2003.

After the All Blacks had trotted out in their new-look strip, Carter wasted no time in regaining the world record for most test points with a penalty in the third minute.

It was not until 10 minutes later that they managed to get across the Springboks try line, however, with prop Crockett touching down in the corner for his first test try after some nice work by Conrad Smith.

The 30 000 crowd did not have to wait long for the second, however, with the All Blacks taking the game straight to the South Africans from the restart.

Carter’s neat grubber kick was hauled in by Ma’a Nonu and, when the centre was finally hauled down, the All Blacks recycled and Carter broke again before feeding winger Guildford to score.

The Springboks struck back just before the half hour mark when they kicked a penalty for the corner, won the line-out and Smit sprang through under the posts to celebrate his 104th test with a try. Morne Steyn converted to reduce the deficit to 13-7.

The All Blacks stormed further ahead five minutes later, however, when Jane scored the pick of his tries by sprinting 50 metres and rounding his marker to touch down in the corner, sending the home side into the break 18-7 up.

Jane scored his second four minutes after the break, scooping up a bouncing ball to touch down after the Springbok midfield defence had gambled on a blitz.

Carter finally kicked his first conversion of the night and added a penalty five minutes later to extend the lead to 28-7.

It was by no means all one-way traffic but the All Blacks started bringing on their replacements, including Sonny Bill Williams for his first home test.

It was his rival for the inside centre spot Nonu, however, whose hard running set up the field position for Guildford’s second try after 64 minutes as the South Africans started to tire.

Guildford turned provider to put Slade over 10 minutes from time and from then on it was just a question of whether the Springboks could hold out and prevent further embarrasment. — Reuters