Botes on top form to lead Sharks to victory 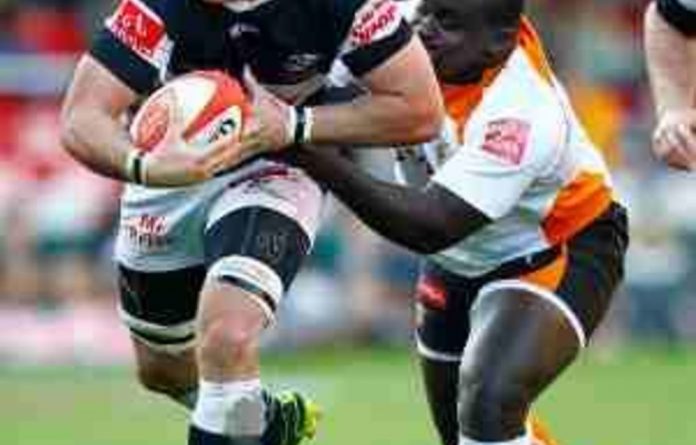 Jacques Botes scored a brace of tries to help the Sharks maintain their 100% start to the Absa Currie Cup with a 43-34 victory over the Cheetahs in a pulsating encounter at Kings Park on Saturday afternoon.

The defending champions, who outscored their visitors by five tries to four, started with a bang and claimed their bonus point try by the 22nd minute before a second-half comeback threatened to silence the Durban crowd.

However, they eventually managed to hold out to make it three wins from three.

John Plumtree’s team wasted little time in getting into their stride with Mark Richards going over after just four minutes, when Keegan Daniel and Louis Ludik combined nicely on the right, before the winger showed an excellent burst of pace 10 metres out to land his first Currie Cup try.

From the subsequent set-piece and brief build-up, Ludik found some space, broke one tackle and easily ran in under the post.

Michalak, who passed a late fitness test to take his place in the XV, again converted before the visitors finally landed their first points courtesy of a Sias Ebersohn penalty.

That proved only a brief respite for the Free Staters with Stefan Terblanche’s grubber kick causing all sorts of problems as Ludik popped up for Botes to score — Michalak striking the conversion onto the upright.

The Sharks claimed their bonus point try in the 22nd minute when Sibusiso Sithole collected from Cronje in his own 22 and ran three-quarters of the field to score.

Michalak found his range this time before Cronje’s pass was intercepted gifting Riaan Smit a first five-pointer for the Cheetahs.

Ebersohn added the extras but the Sharks continued to dominate and were rewarded before the break when Botes was on the end of a pushover try following a five metre line-out.

The conversion again went wide and with the clock winding down to the break, the visitors managed a second try of the afternoon to give themselves a glimmer of hope.

Boom Prinsloo was the hero when he crossed under the post after the siren, the referee eventually giving the number eight the benefit after consulting with the television official.

Ebersohn kicked over to leave the score 31-17 at half-time.

After the restart, Michalak extended the lead with a 47-metre penalty, before another pick-up-and-go led to WP Nel scoring a third try for his side just before the hour-mark.

Ebersohn added the extras and the Cheetahs strongly threatened a comeback when Uys crossed for a bonus-point try on the left with 14 minutes to go — a score that was again converted by their number 10 to bring the gap to six.

With three minutes remaining Michalak landed another penalty to make the game safe.

Surprisingly though, Ebersohn had a straightforward chance to secure his side the consolation of a bonus point but missed his only kick of the afternoon from right in front with what turned out to be the last touch of the game.