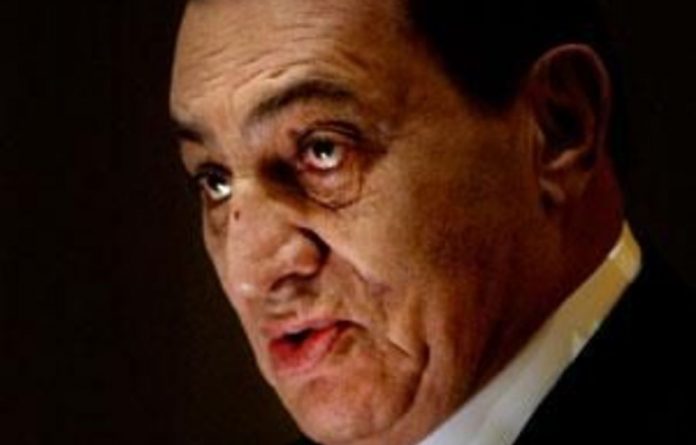 The trial of former Egyptian president Hosni Mubarak will be held at a police academy in Cairo with a maximum of 600 people allowed to attend although proceedings will be televised, the presiding judge said on Sunday.

A source close to Mubarak, who has been in hospital since April when he was first questioned, said on Thursday that the former president’s lawyer would tell the court he was too sick to attend the trial due to start on Wednesday.

A Cabinet statement said interior minister Mansour el-Essawy had received a letter from the public prosecutor calling for Mubarak to be present. If he is absent due to sickness that could further anger protesters who want a public trial.

Many Egyptians see Mubarak’s illness and detention in a hospital in the Red Sea resort of Sharm el-Sheikh as ploy for the army rulers to avoid publicly humiliating their former commander-in-chief. He has so far been spared transfer to a Cairo prison where his two sons and other officials are held awaiting trial.

“In God’s words, if you are to judge people, you must do so with justice,” judge Ahmed Refaat, who is presiding over Mubarak’s case, told a news conference. The briefing was delayed due to a crush of journalists wanting to hear about the case.

Corrupt system
Mubarak is charged with a range of offences, the most serious of which is conspiring over the killing of protesters during the uprising which led to his overthrow in February. If convicted, he could face the death penalty.

Protesters and ordinary Egyptians accuse Mubarak, who ruled for 30 years, of leading a corrupt system that routinely tortured people in detention and crushed opponents. They blame him for killing about 850 people in the uprising.

Mubarak will stand trial with his sons Gamal — who was once viewed as being groomed for the presidency — and Alaa, along with former Interior Minister Habib al-Adli, a business executive and confidant Hussein Salem and six other police officials.

Alongside court officials and lawyers, those allowed to attend the trial include close relations of the accused and accredited journalists, Refaat said. Only the Egyptian state broadcaster would be allowed to set up television cameras in the hall where proceedings will be held.

Some members of the public will be allowed to register beforehand to attend. Family members of victims of the uprising and activists had crowded in to hear previous court hearings for the former interior minister and other senior officials.

“The court is fully convinced of the Egyptian people’s right to follow what happens in the courtroom in terms of legal procedures,” Refaat said.

Historic case
Egyptian trials are not traditionally broadcast but high-profile cases since the uprising that ousted Mubarak on February 11 are televised after protesters demanded more transparency.

After the initial chaos at the news conference, Refaat asked that “the honourable attendees” allow that “justice and the law be thoroughly followed and [allow] the court and defence team the ability to complete their duties.”

The police academy on the outskirts of Cairo was originally named after Mubarak but his name in big concrete letters was torn down after the uprising.

Refaat also said the court had a right to convene at dates that had not been previously scheduled, suggesting the court would have greater freedom than normally permitted to proceed with the case and associated hearings.

Another judge, Refaat al-Sayyed, who is not involved in the case, told state television this could mean that sessions are held daily on working days to ensure a swift resolution of “the historic case all Egyptians are watching.” — Reuters