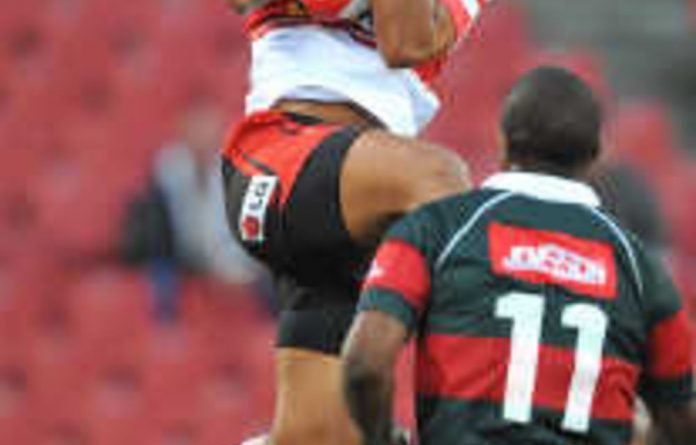 It may be pure coincidence but the two sides that are yet to lose a match after three rounds of Absa Currie Cup rugby are coached by New Zealand descendants.

Lions coach John Mitchell and Sharks coach John Plumtree were born in the same town, Hawera, and after respective victories over the Leopards and Cheetahs, only points difference separates their teams at the top of the log.

Not that their third victories of the season were as convincing as they would have liked.

The Lions secured a 53-36 victory but only managed to seal the deal seven minutes from full-time after the Leopards bounced back from a 29-15 half-time deficit to level the scores at 36-all with 10 minutes left to play.

“We got there at the end and that’s the main thing,” said Mitchell.

“Not everyone brought their best game tonight and we handed just about all their tries to them.

“The last try for us as a team was an outstanding team try, but to finish the game off the way we did really annoys me.”

Unforced errors
The Sharks also had to dig deep to keep the Cheetahs at bay in their 43-34 win in Durban and were also on the receiving end of a fight back that saw the Cheetahs bounce back after trailing 26-3 after a four-try blitzkrieg of their hosts.

“I was hoping that with three or four minutes to go we would be a bit more comfortable than that,” said Plumtree.

“We knew they wouldn’t lie down and probably what undid us in the second half was our discipline.

“We gave away far too many penalties which really hurt us.”

Cheetahs coach Naka Drotske was understandably irritated at the fact that his charges again struggled to put two halves together.

“We need to learn to put together two halves of 40 minutes,” said Drotske.

“Last week against the Bulls we played well in the first half and then let it slip in the second, this week it was the other way around.

“Also there were lots of unforced errors, the breakdowns weren’t good and there was a lot there, so I’m not happy at all with the way we played.”

Light work
In Cape Town, Western Province made light work of the Blue Bulls by securing a 35-7 victory in their most impressive performance of the competition so far.

The Blue Bulls were the only team that failed to secure a bonus point for four tries and have subsequently dropped to seventh place on the log after only managing one win in the competition so far.

Province coach Allister Coetzee praised his men for their showing but warned that it is early days yet.

“It was a good day at the office but I reminded the players straight after the match that the season still has a long way to go,” said Coetzee.

“I was impressed with our physicality and intensity as it’s not something that one can coach, it has to come from the players themselves.”

Hugely disappointed
Blue Bulls coach Pine Pienaar was hugely disappointed that his charges did play with the same intensity they did the previous week adding that Province deserved the victory for the way they handled the pressure on the day.

“The score reflected what happened on the field,” said Pienaar.

“We had to defend hard, we did not have quality ball and we knew that they (WP) will always be a quality side at Newlands.

“WP did well to pin us down in our own half and then put pressure on us and as a result we made mistakes.”

In Friday’s match the between the Pumas and Griquas, it was also a case of a failed second half comeback as the men from Kimberley bounced back from a humiliating defeat to the Lions the previous week, to secure a 40-33 victory.

Griquas ran in five tries in the final 25 minutes of the first half of their match at the Mbombela Stadium that would go on to set the tone for the rest of the weekend’s matches.

A total of 37 tries were scored during the third round of the competition as all the winning teams received five log points for their efforts. — Sapa