Mubarak made his own bed, is he lying from it? 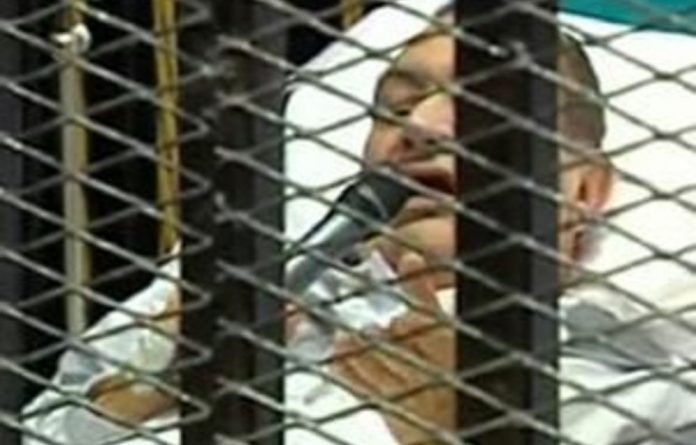 Egypt’s one-time strongman Hosni Mubarak on Wednesday denied murder and graft charges after he was wheeled into the dock, marking the first time a regional ruler faced his people in court since the Arab Spring erupted in December.

The former president, looking pale and dressed in white, pleaded not guilty as he lay on a stretcher in a metal-barred cage to the premeditated murder of protesters who took to the streets to topple his regime in an uprising that erupted on January 25.

He and his sons Alaa and Gamal also denied all corruption charges.

After a four-hour hearing — the former strongman’s first public appearance since he resigned on February 11 — the trial of the Mubaraks was adjourned until August 15.

Former interior minister Habib al-Adly and six of his deputies were also in the dock in the same case, and they are due in court again on Thursday.

Hospital detention
Judge Ahmed Refaat, presiding over the Cairo Criminal Court, said Mubarak would be staying at the International Medical Centre, a hospital on the outskirts of Cairo, until the next hearing.

In response to a request by the defence team, Refaat agreed to allow an oncologist to follow up on Mubarak’s health during his hospital stay.

Alaa and Gamal seemed composed throughout the hearing and appeared to take turns to shield their ailing father from the television cameras, leaning down regularly to talk to him.

The trial of Mubarak, whose spectacular downfall sent shockwaves across the region, was a key demand of the uprising.

The Muslim Brotherhood, which was banned under Mubarak and formed the Freedom and Justice Party (FJP) after his ouster, hailed the trial as “a real victory for the will of the people”.

Open to the public
“The fact that millions could watch the trial on television screens will reassure the Egyptian people that justice is on the right course,” said FJP secretary general Saad Katatni.

“If things continue in this way, it will build the bridges of trust between the people and the ruling body in Egypt during this phase,” Katatni said.

At the court, one civil society lawyer called for Field Marshal Hussein Tantawi, head of the ruling Supreme Council of the Armed Forces (SCAF) and Mubarak’s long-time defence minister, to appear as a witness in the trial.

Lawyers jostled for microphones during the hearing that was for the most part conducted in an orderly manner.

Outside the courtroom clashes erupted between loyalists and foes of the former president, with several people injured.

Trouble in the street
Pro-Mubarak protesters carried pictures of him, while his opponents held up posters of the former president behind a noose, and security forces stepped in repeatedly to separate both sides.

The crowd, including families of victims killed during the uprising, had been watching the trial on a large screen outside the police academy — once called the Mubarak Police Academy.

Until the last minute, it was widely believed Mubarak would not show up, or that the trial would open and then be adjourned indefinitely.

It was an epic downfall, unthinkable just six months ago, a once absolute ruler now a caged infirm.

The hearing has gripped the nation, and Cairo’s usually bustling streets were abnormally quiet during the proceedings.

Mubarak, 83, was flown to Cairo from the Red Sea resort of Sharm el-Sheikh where he had been in custody in hospital being treated for a heart condition.

Security was tight, with barbed wire outside the Police Academy and more than a dozen riot police trucks securing the entrances.

Captive audience
The trial is being held in an auditorium fitted with a large black cage to hold the defendants, including Adly on whom Mubarak relied to quell the revolt, and six police chiefs.

Businessman Hussein Salem, a close associate of the Mubaraks, is being tried in absentia.

The defendants are accused of stealing millions of dollars from the state and ordering the killing of anti-regime protesters during the uprising.

More than 1 000 police and soldiers secured the complex and vetted some 600 lawyers and journalists.

For weeks, it seemed likely that Mubarak, who doctors say refused to leave his hospital bed, would be tried in Sharm el-Sheikh, but the justice ministry announced last week the trial would be held in Cairo.

Coma claim
His lawyer Farid al-Deeb claimed that Mubarak suffers from cancer and went into a coma last month, which the hospital denied.

One of his doctors said the ex-president was stable, but extremely depressed and weak after refusing food for several days.

Deeb’s announcements appear to have been intended to increase sympathy for Mubarak and spare him the indignity of appearing in the defendants’ cage.

But the military, which assumed power after Mubarak’s resignation, is keen to prove it harbours no lingering loyalties to the former president.

The trial is the latest in a string of legal proceedings against Mubarak-era officials.

Several ministers have already been given jail terms in corruption cases, including Adly, already sentenced to 12 years for graft.

Justice must be done
On Tuesday, international rights groups urged a “fair and transparent” trial.

“This trial presents a historic opportunity for Egypt to hold a former leader and his inner circle to account for crimes committed during their rule,” said Malcolm Smart, Amnesty International’s director for the Middle East and North Africa.

Sarah Leah Whitson, Middle East and North Africa director at Human Rights Watch, said: “If these proceedings scrupulously reflect the international fair trial standards, it will embody a clean break with the record of impunity that characterised Hosni Mubarak’s rule, contribute to a new and hopeful chapter in Egypt’s history, and set an important regional precedent.”