SA criticised for slow response to Horn of Africa crisis 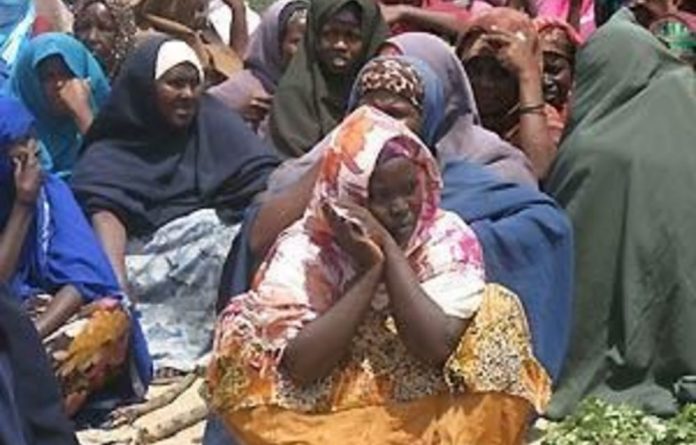 The South African Department of International Relations and Cooperation (Dirco) on Wednesday slammed suggestions that it was not doing enough to respond to the famine in East Africa, saying it started preparations ‘as early as March”.

Famine had spread beyond the two regions of Bakool and lower Shebelle in Southern Sudan, and into the Afgoye corridor, Mogadishu, and the Balaad and Adale districts of Middle Shabelle, said Grainne Molony, head of the UN Food Security and Nutrition Analysis Unit.

More than 12.4-million people in Kenya, Ethiopia, Djibouti, Uganda and Somalia are affected by the drought in the Horn of Africa, which is expected to worsen in the months to come.

The South African government has donated R2-million in food and monetary aid, according to Dirco spokesperson Clayson Monyela. He said a ‘coordinated and multi-pronged response” to the famine had been developed. This included working with the department of agricultural affairs to ask farmers to get involved in relief efforts.

But on Wednesday, the head of the African Renaissance department at Unisa, Professor Shadrack Gutto, said if one added up the ‘price of a few luxury cars that political elites are enjoying, one would have expected a little bit more than what we [South Africa] have sent”.

Gutto said South Africa had lost its role as a leader in the continent. He said if South Africa wanted to call itself ‘a gateway to Africa”, it needed to be seen as ‘taking a stand and providing leadership to address African problems”.

Senior researcher at the Institute for Security Studies, Dr Emmanuel Kisiangani, said the response to the drought had been ‘slow from all quarters”, including from African countries and the United States.

He said the drought should have been expected, after two seasons of low rainfall. But he said South Africa’s response might have been somewhat muted by the many problems if faced at home.

The African Union is hosting a donor’s conference in Addis Ababa on August 10 to address relief efforts for those worst hit by the famine, according to an AU statement. But, Gutto said, the AU response had also been ‘too slow”.

Monyela said the government continued to work with non-governmental organisation Gift of the Givers, which it had been assisting since March.

Dr Yakub Essack, the medical coordinator at Gift of the Givers, said the organisation was in discussions with the government and would ask the state to help fund the NGO’s two aid flights to Somalia, which had arrived in Mogadishu on Monday. They also hoped the government would fund additional flights to Mogadishu.

Gift of the Givers has already delivered 41 tonnes of medical supplies and nutritional supplements to Mogadishu. On Tuesday, the group set up a makeshift clinic in an empty building near a refugee camp in Mogadishu, where it has been treating critically ill children.

Paediatricians are helping the most severely affected, general practitioners are treating those in a less severe condition and dieticians are offering care to children needing hydration and food.

In a report on the drought in the Horn of Africa, the UN’s Office for the Coordination of Humanitarian Affairs said on Tuesday that instability continued to hinder access to the south. But the UN said it was in talks to improve access to the southern region where 2.8-million Somalis are in desperate need of food. A total of 3.7-million people are in need humanitarian help across the drought-ravaged country.

Somali refugees continue to flood into Ethiopia and Kenya. In Kenya, the UN’s report said, the Daabab camps built to cater for 90 000 people were instead hosting about 390 000 refugees. Kenyans were also registering as refugees in order to receive support or were seeking casual employment in the camps.

In Ethiopia, the transit centre at Dolla Ado, built to host 1 500 people is currently holding more 14 000 people, according to the report.

The UN has appealed for another $1.2-billion dollars in funding to help those affected by the drought. The South African government is also urging citizens to donate to organisations working in the region.