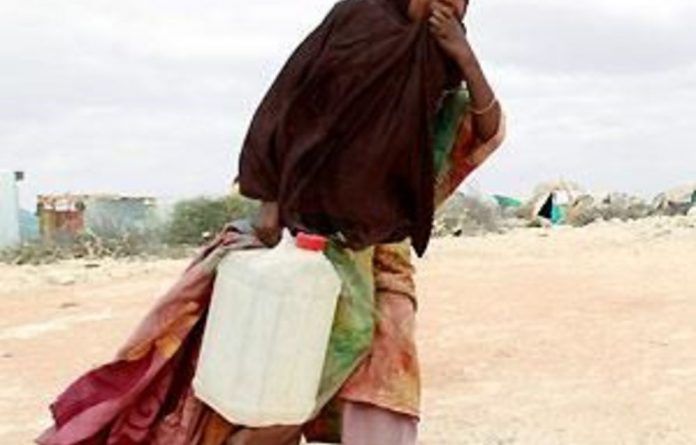 At least seven people died in Mogadishu, Somalia on Friday, after what witnesses said was a food riot that turned deadly after government troops opened fire on refugees clamouring for food from a convoy on its way to a refugee camp.

Residents of Mogadishu’s largest famine refugee camp accused government soldiers of starting the chaos by trying to steal some of the 290 tonnes of dry rations that aid workers were trying to distribute there. Then refugees joined in the scramble, prompting soldiers to open fire, the witnesses said.

“They fired on us as if we were their enemy,” said refugee Abidyo Geddi. “When people started to take the food then the gunfire started and everyone was being shot. We cannot stay here much longer. We don’t get much food and the rare food they bring causes death and torture.”

Others said an armed gang had antagonised the convoy’s security.

“Militiamen opened fire to loot the food aid,” said Abdikadir Mohamed, a driver. “There was chaos and everybody was running for cover after the security escorting the food aid convoy exchanged fire with the armed men.”

Imtiaz Sooliman, a South African doctor who is in Mogadishu with the nongovernmental organisation Gift of the Givers, said he understood that the deaths were the result of a food riot rather than an attack.

Somalia Prime Minister Abdiweli Mohamed Ali visited the camp after the violence and said he was “deeply sorry”. Ali said an investigation would be opened and promised harsh punishment for anyone found guilty.

There has been fierce fighting in the Somali capital between rebel group al-Shabaab and the African peacekeeping forces that support the American-backed transitional government, explained senior researcher for the Institute for Security Studies Emmanuel Kisiangani.

Parts of Mogadishu are controlled by rebel group al-Shabaab and other parts are run by the American-backed transitional government, he added.

“Al-Shabaab has been shooting rockets and grenades into the city and clashing with peacekeeping forces in recent months.”

But Kisiangani cautioned against jumping to conclusions about the attack on food convoys saying in some cases it was “difficult to differentiate between thugs and al-Shabaab … al-Shabaab is not a cohesive group.”

The World Food Programme’s Susannah Nicol said that the incident “highlights the challenges that humanitarian agencies face in trying to deliver assistance in this difficult environment”.

The South African Gift of the Givers team in Mogadishu “hear gunshots day and night, all the time” Sooliman, told the Mail and Guardian. But he was quick to add that the members of the team were safe.

The group of about 50 doctors, dieticians, media and support staff is accompanied by 30 armed soldiers travelling with them in two bakkies or pick-up trucks whenever they leave their secure compound.

Security guards and military personnel guard the inside and outside of the makeshift Mogadishu clinic where they have treated thousands of sick and weak patients, according to Sooliman.

“There are a lot of stray bullet injuries” he added.
The team had seen about 3 000 sick and starving patients by Friday afternoon and fed 5 000 people, Sooliman said.

More than 12 million people in the Horn of Africa are in need of immediate food aid. The UN says 640 000 children are acutely malnourished in Somalia, where the UN has declared five famine zones, including the refugee camps of Mogadishu.

The UN has appealed for at another $1.2-billion dollars in aid to help address the famine across the Horn of Africa.

The Gift of the Givers team returns to South Africa on Tuesday but will continue to supply aid to Somalia in the months to come, he said.

On Friday Denmark and Sweden donated more money to the drought-ravaged countries bringing the total Scandinavian countries pledged this week to $20-million dollars.

“The drought is now so serious that famine is spreading. We need to increase our aid significantly,” Danish Development Cooperation Minister Soeren Pind said in a statement.

Sweden’s minister of international development and cooperation, Gunilla Carlsson, said on Thursday said that since the beginning of the year the Scandinavian country had sent $115-million in aid to the drought-ravaged region.

Neighbouring Norway also announced late last month that it was increasing this year’s aid to the region to $47.8-million.

The South African government has donated R2-million thus far, according to Clayson Monyela, the spokesperson for the department of International Relations and cooperation. — Additional reporting by Reuters, Sapa

After being promised reimbursement for financial assistance, Gift of the Givers has been left high and dry by the water and sanitation department
Read more
National

The Gift of the Givers are confident of the photographer’s release from Syria, but the situation is sensitive and complicated
Read more
National

No one, not even seemingly principled South Africa, can resist selling weapons to a warring, rogue state
Read more
Environment

"Day Zero" is the day when city officials will be forced to cut off the normal water supply to more than one-million households.
Read more
Advertising