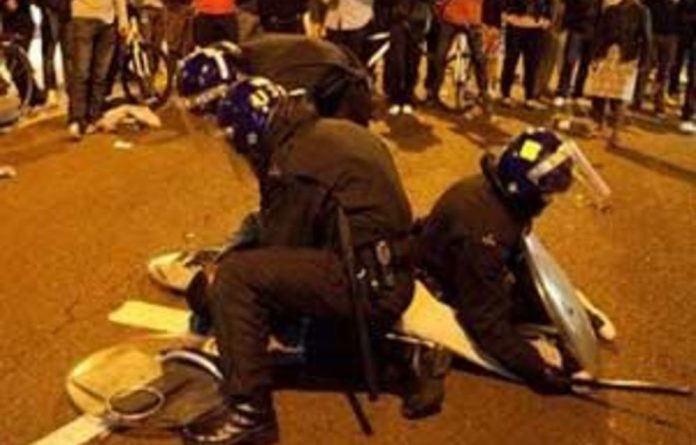 A chaotic wave of violence and looting raged across London and spread to three other major British cities on Tuesday, as authorities struggled to contain the country’s worst unrest since race riots set the capital ablaze in the 1980s.

In London, groups of young people rampaged for a third straight night, setting buildings, vehicles and garbage dumps alight, looting stores and pelting police officers with bottles and fireworks. The spreading disorder was an unwelcome reminder of London’s volatility for leaders organising the 2012 Olympic Games in less than a year.

Police called in hundreds of reinforcements — and made a rare decision to deploy armoured vehicles in some of the worst-hit districts — but still struggled to keep pace with the chaos unfolding at flashpoints across London, in the central city of Birmingham, the western city of Bristol and the northwestern city of Liverpool.

The riots appeared to have little unifying cause — though some involved in the violence claimed to be motivated by government cuts to public spending, which will savage welfare payments.

Prime Minister David Cameron cut short his summer vacation in Italy — reversing an earlier decision to continue his break — and headed home for a meeting of the national crisis committee on Tuesday morning.
Cameron was likely to attempt to toughen the response against the violence on Tuesday, with some communities complaining that stretched police were simply unable to reach some centers of the fast-spreading violence.

Rioters were left virtually unchallenged in several neighbourhoods and able to plunder from stores at will or attempt to invade homes. Restaurants and stores closed early across London, fearful of looting.

Violence flared throughout the night, from gritty suburbs along the capital’s fringes to central London’s famously glitzy Notting Hill neighbourhood. London’s Ambulance Service said it had treated 16 patients, of whom 15 were hospitalised. Police said 334 people had been arrested and 69 people charged with offenses.

Peaceful protest
Violence first broke out late on Saturday in London’s northern Tottenham district when a peaceful protest over the fatal police shooting of Mark Duggan, a 29-year-old father of four who was gunned down in disputed circumstances Thursday, turned violent.

Duggan’s death stirred old animosities and racial tensions which prompted riots in the 1980s, despite efforts by London police to build better relations with the city’s ethnic communities after high-profile cases of racism in recent decades.

A brief inquest hearing into Duggan’s death will take place tomorrow, though it will likely be several months before a full hearing is convened.

As the unrest spread, some pointed to rising social tensions in Britain as the government slashes £ 80-billion from public spending by 2015 to reduce the huge deficit, swollen after the country spent billions bailing out its foundering banks.

In the south London district of Croydon, police said a 26-year-old man was shot and seriously injured Monday but were unable to say immediately whether the incident was linked to rioting there.

A massive blaze ravaged a 100-year-old family run furniture store in Croydon and sent thick plumes of smoke into the air, forcing nearby homes to be evacuated. In the Clapham Junction area of south London, a mob stole masks from a fancy dress store to disguise their identities and then set the building on fire.

Dozens of people attacked shops in Birmingham’s main retail district, and clashed with police in Liverpool and Bristol — spreading the chaos beyond London for the first time.

“This is the uprising of the working class. We’re redistributing the wealth,” said Bryn Phillips, a 28-year-old self-described anarchist, as young people emerged from the store with chocolate bars and ice cream cones.

Phillips claimed rioters were motivated by distrust of the police, and drew a link between the rage on London’s street and insurgent right-wing politics in the United States. “In America you have the tea party, in England you’ve got this,” he said.

Police acknowledged on Tuesday that major new bouts of violence had flared in at least five locations, badly stretching their resources.

‘Mindless thuggery’
“The violence we have seen is simply inexcusable. Ordinary people have had their lives turned upside down by this mindless thuggery,” police commander Christine Jones said.

Though the unrest escalated through Sunday as disorder spread among neighbouring areas, the crisis worsened on Monday — with violence touching areas in the east and south of London previously untroubled by the chaos.

Some residents called for police to deploy water cannons to disperse rioters, or call on the military for support and questioned the strength of leadership within London’s police department — particularly after a wave of resignations prompted by the country’s phone-hacking scandal.

“I have never seen such a disregard for human life. I hope they rot in hell. The grief they have caused people, the fear they have put in people’s hearts, decent people who have done nothing to anyone,” said Alan McCabe, a resident in Croydon watching the violence unfold.

About 100 young people clashed early on Tuesday with police in the Camden and Chalk Farm areas of north London, smashing their way into a bicycle store and mobile phone shop.

The small groups of youths — most with their heads and faces covered — used SMS messages, instant messaging on BlackBerry smartphones and social media platforms such as Twitter to coordinate their attacks and stay ahead of the police. — Sapa-AP