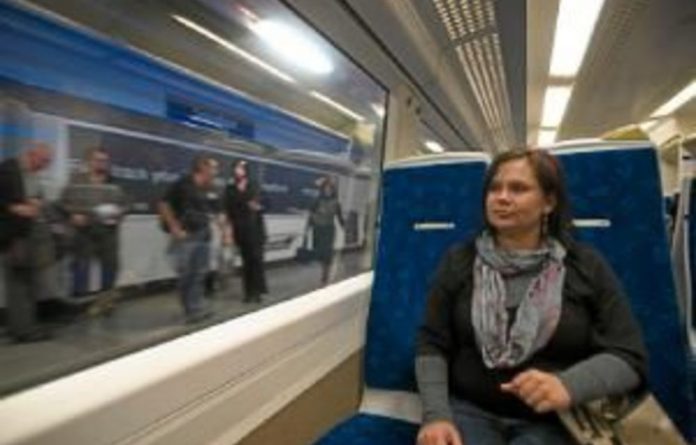 I was assaulted on the Gautrain this week. By an Afrikaans oupa from Pretoria. As I got off the train at the Sandton station, the man grabbed my arm and nearly knocked me over in his haste to get on.

Behind him, his family and a host of other commuters were pushing forward as if the Beatles had re­united and were holding one last performance right there on the train. Clearly they did not heed the “please wait until passengers disembark first” refrain that has now become a part of my daily commute.

I have been using the Gautrain for just one week but I still long for my black Terios, which has been parked in the garage, and the freedom it represented to go wherever the road would take me. But my little Terios also came loaded with stress, road rage, traffic, a hefty fuel and toll bill and carbon emissions. It had to go.

On the right track

The Gautrain has launched its much-anticipated Hatfield link, which promises to greatly reduce commuter traffic between Pretoria and Johannesburg.

Like a smoker trying to break the habit on their first day, I gave up my addiction without much thought. But when the bus from my home in Kempton Park to the Rhodesfield station took half an hour, I started to calculate the time spent — I could have been halfway to work by now. And I was the only passenger on the bus. So much for less stress or saving the environment.

But once I got on to the train, my bus rage evaporated. The blue seats became my serene retreat. I planned my day, and wasn’t interrupted by blaring horns.

Interruptions came only in the form of overeager commuters dying to talk about the fabulous Gautrain. (I quickly understood why people have their iPods on.) By the time we passed the Kelvin power station in Isando, puffing smoke into the air, pride had taken over — my little SUV wasn’t contributing to climate change any longer.

Besides, the train was filled with promise of what South Africa could be. It was a utopian society where no poor people existed. The abundant security made sure the posted rules were clearly adhered to — no soiled clothes, no begging and certainly no informal trading.

But if you’re thinking only the white middle class was on the train that would be a gross miscalculation. There were advocates in their robes on their way to court sitting next to funky students with dreadlocks and all sorts of commuters from office blocks around Gauteng reading the daily newspapers. I felt as if I was sitting in a South African Breweries ad.

On the move
As I passed Marlboro’s modern station, which sits in stark contrast to the abject poverty and RDP houses off in the distance, I was reminded of the huge bill the Gautrain came with and what that money could have bought.

Twenty-five minutes later I walked out of the Rosebank station, the paper under my arm, ready to attack the day and not a taxi driver. And the 10-minute walk to the Mail & Guardian offices made me feel good about myself. This couch potato was moving.

Then I had to meet a contact in Melville. All the company cars were out. I was stranded. Office-bound, I rescheduled.

That afternoon the walk back to the station was a little bit colder. And I couldn’t even order a coffee at nearby Motherlands to warm me up. Eating and drinking is forbidden on the train and that coffee (or even a stick of gum) could end up costing me R700. Very Singaporean.

It was dark, too, when I had to walk back to my house after the bus had dropped me off. Suddenly I felt very exposed and alone. So I decided not to abandon my trusted little Terios completely but rather to find a parking space for the little guy at the station on my next trip.

On Monday morning it felt strangely comforting to move into the driver’s seat again. Near the station I was nearly pushed off the road by a maniac in a red hatchback, bringing back all the memories of why I ditched the car in the first place. With the long weekend, Monday also brought families on to the train. In hordes. With grannies and gogos and oupas.

This time, I had to head to Pretoria for a meeting. It soon became clear that the good people of Pretoria had heard that there was a train in town — and they were getting on to it. So travelling to Rosebank from Hatfield, it took 40 minutes just to get on to the train. Some people gave up and left. Others bemoaned that it was typical South African style. It turned out that some genius had pushed a panic button near the Midrand station, bringing the whole system to a halt.

That day, I calculated that I could have made the trip to Hatfield twice with my Terios and I felt cheated. I started fumbling in my bag for the familiarity of my car keys.

Once on the train, however, the enthusiasm of the masses created a buzz that infected me. Yes, the train has huge financing issues. The feeder systems are inadequate, taxpayers will be funding its often prophesised failure, and the poor, those affected most by our nearly non-existent public transit system, are in no way addressed with the Gautrain. But for that moment, watching toddlers press their noses against the window in wonder as the Gauteng landscape sped by, I felt proud to be a South African.

Financial tunnel vision
So what if the Gautrain and its buses are not as full as expected? Who will pay the price? Seemingly you, the taxpayer. This is owing to the project’s controversial patronage guarantee and it has the potential to cost taxpayers R360-million a year if there aren’t enough bums on seats.

The Gautrain project’s total cost currently stands at just over R26.2-billion. In 2006, the national treasury approved a cost of R25.2-billion for the Gautrain’s public-private partnership contract.

The largest partnership of its kind in South Africa, it is a “fixed-price and fixed-scope” 15-year contract. This means the bill for the train is not supposed to go up, unless more stations are built or extra work is required. If the price of cement went up, that would be for the account of the private partner, which is supposed to carry all the risk of building in a volatile economy.

It is still a sweet deal for concessionaire and private partner the Bombela Consortium, which guarantees Bombela that if not as many passengers use the Gautrain as expected, it will receive a government subsidy to ensure its operation of the train does not run at a loss.

Just how many passengers Bombela needs, no one has been able to say.

Barbara Jensen, spokesperson for Gautrain management, said Bombela would take all the operating risks other than full demand risk. “The provincial government provides a patronage guarantee in months where the revenue from the system is greater than Bombela’s forecast revenue. In the event of buses or trains not running according to schedule or in the event of security breaches, the patronage guarantee diminishes.”

Bombela, for instance, will have to handle the costs of the waterlogged Park station tunnel.

She said the guarantee was provided because the project was the first of its kind in South Africa and the market was untested. She was unable to estimate numbers because the length of the trip is a factor in determining the revenue needed for the patronage guarantee. But by its own estimates Gautrain’s management wants 108000 passengers a day by the end of January next year. On Monday this week, 36000 used the train and the cars were packed.

The Gautrain project is one of the priciest infrastructure projects in recent years and many have questioned whether the public-private partnership model it used was not, in fact, too beneficial for Bombela.

Eyebrows were raised when more than a third of the Gauteng department of roads and transport’s budget for 2011/12 was set aside for the project. This included R259-million for the patronage guarantee this year and a possible R360-million for next year.

It is clear that the democratic government has failed the taxi industry, not only now during the Covid-19 pandemic, but for decades.
Read more
Sport

The Nodal Review might transform South Africa’s biggest city. Implementing the new policy, which has the potential to open wealthy suburbs to impoverished residents, is the challenge
Read more
Business