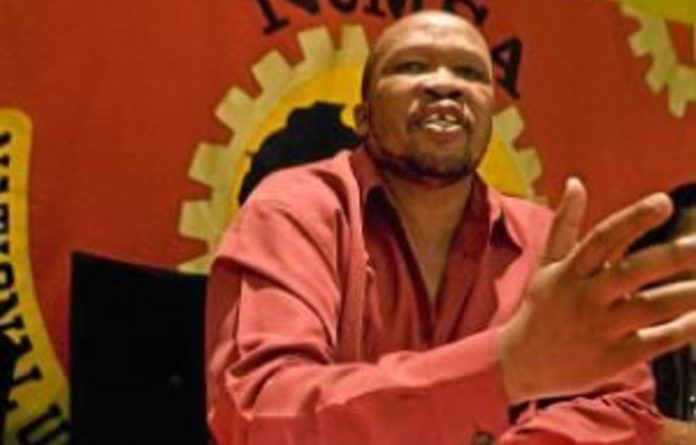 Sources close to Jim in the labour federation confirmed that Mthethwa was asked to extend protection to the union boss after Numsa president Cedric Gina reportedly told journalists in Johannesburg last week that Jim’s life was in danger, “especially in the light of concocted media lies and labelling levelled at him”.

But Numsa’s national spokesperson Castro Ngobese refused to respond to questions this week about Jim’s security, saying it was “an internal organisational matter”.

“We are not at liberty to share with the public or the media our engagements with the minister of police,” Ngobese said. An irritated Jim said the meeting had yet to happen, but had “nothing to do with your newspaper”.

In a Numsa statement issued last week, the union claimed it would “take the necessary measures to protect the life of its general secretary”.

“The history of this country, among other things, warns us that when a revolutionary communist has the kind of persistent negative class media coverage such as the one now directed at our general secretary, they run the risk of being assassinated. We have been warned,” the union said.

Alleged threats to Jim’s life come alongside a continuing spat between Numsa and fellow Congress of South African Trade Unions affiliate, the National Union of Mineworkers (NUM). The two unions have been at loggerheads about the succession process in the labour federation, a spat that has deteriorated so much it prompted Cosatu to release a recent media statement assuring members that it was “on top of the situation”.

“This round of statements merely reflects some areas of difficulty but not a free-fall within the federation,” read a statement from Cosatu issued after Numsa placed a full-page advertisement in the Sowetan newspaper on Monday detailing its position on the federation’s leadership race.

The race to succeed Cosatu general secretary Zwelinzima Vavi is in full swing, with sources within Numsa and the NUM saying it pits Jim against his NUM counterpart, Frans Baleni.

Vavi announced last year that he would not stand for re-election in the labour federation’s elective congress next year, but was persuaded by Cosatu’s central executive committee to retract the statement for fear that it would open the space up to a bitter and drawn-out contest.

Efforts by Cosatu to contain publicly expressed differences are often undermined by sporadic outbursts from leaders of affiliates.

“To refer to some leaders within Cosatu as some highly undisciplined and ideologically confused elements is not only divisive and destructive, but tantamount to hurling insults at the leadership collective of the federation,” said Seshoka.

Ngobese denied that there was a succession debate within Cosatu, in spite of his union saying last week that Jim was being targeted because of his leadership ambitions.

“The succession debate is a figment of imagination of those who are not committed to pushing Cosatu mandates or resolutions but use the media to lobby for their friends to occupy strategic positions within Cosatu for their own self-centred and factional interests,” Ngobese said.

NUM president Senzeni Zokwana said it was ironic that Numsa could argue that there was no leadership contest within Cosatu, but at the same time claim that there were forces trying to discredit Jim from qualifying to succeed Vavi.

The M&G‘s efforts to get comment from Mthethwa were unsuccessful.