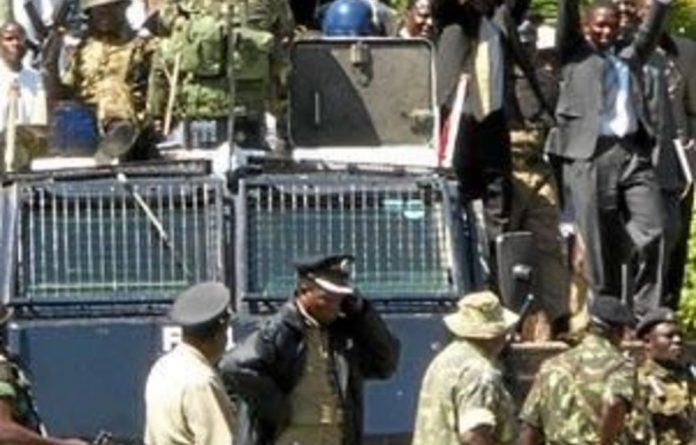 A South African national and a Malawian living in South Africa allegedly hired by former Malawian vice-president Cassim Chilumpha to assassinate President Bingu wa Mutharika are expected to testify when the trial in which Chilumpha is accused of treason begins on October 4.

Chilumpha and his co-accused, Yusuf Matumula, have pleaded not guilty to charges of treason and of conspiracy to murder.

Chilumpha was arrested in 2006, a few months after Mutharika dumped the United Democratic Front (UDF), the party that ushered him into office, and formed the Democratic Progressive Party (DPP). His vice-president, Chilumpha, remained in the UDF.

The Malawian government claims to have a recording of the conversation between Chilumpha and the alleged conspirators concerning the assassination plot.

Court documents identify Minnaar and Ndlovu as the main witnesses, who claim that Chilumpha and Matumula approached them to help overthrow the Malawian government and to assassinate Mutharika and other members of the government.

After the arrests, the then director of public prosecutions, Wezi Kayira, said that the two witnesses would testify only if their identities were concealed as they feared for their safety. But in 2008 the high court denied the request.

‘Never been to Malawi’

Despite being identified in the court documents, Minnaar, in an interview with the Mail & Guardian, pleaded ignorance. “I am not aware of the case and I don’t know Dr Cassim Chilumpha and I have never been in Malawi. I am in South Africa and nobody has called me to be a witness.”

But Minnaar has a reputation of being an information peddler, who previously worked for both the National Intelligence Agency (NIA) and the South African Secret Service (SASS), and had contact with the Directorate of Special Operations (Scorpions) when it still existed.

Minnaar, though he was not named, featured in evidence at the 2008 Ginwala inquiry into former national director of public prosecutions, Vusi Pikoli.

One of the complaints about Pikoli was that he had not informed the NIA about an approach by the Malawian director of public prosecutions for assistance in gathering evidence against Chilumpha in South Africa.

Pikoli submitted that in fact he had mentioned the issue to the director general (DG) of SASS. He said: “The only reason I had raised this with the DG of SASS is because an information peddler, who is known within the South African intelligence community, had accompanied the DPP [of] Malawi to the meeting and that this information peddler previously worked for SASS.”

The M&G has established that the peddler being referred to was Minnaar.

Chilumpha has raised concerns that Minnaar might have been acting as an agent provocateur.

In an affidavit for an application to have the identities of Minnaar and Ndlovu publicly disclosed, Chilumpha said that, when he was released on bail in 2006, he had found information that, during the time of Mutharika’s predecessor, Bakili Muluzi, a white South African male had approached a Malawian official at the Malawi embassy with information about a plot by two named prominent leaders of the opposition to kill Muluzi. Chilumpha said he needed to establish whether that person was Minnaar.

Chilumpha also said that a statement from another state witness, Jacobus van Schalkwyk, showed that Minnaar was introduced to Van Schalkwyk by Dr Nel Marais, a risk consultant based in South Africa.

In the court papers, Chilumpha said: “With Minnaar’s links to Marais, I am anxious to know whether, and to what extent, Minnaar is in the defence and security business in Africa and whether — he is a trickster who operates in the dishonest and brutal underworld.”

Marais said this week that he knew the two people mentioned by Chilumpha. “I had infrequent social interaction with both Minnaar and Van Schalkwyk during the past few years.”

But he refused to give any other details.

It also apparently promised to ensure and safeguard their and their families’ personal safety during and after the legal process and related actions against Chilumpha and Matumula.

Also, Ndlovu and his family were to be taken from their residence to an unknown and safe residence of similar standard.

A source has said other memorandums of understanding had been signed after this between the Malawian government and the two witnesses.