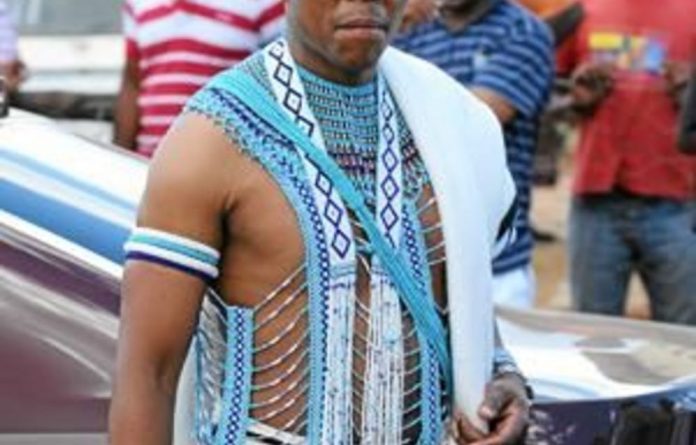 President Jacob Zuma’s new son-in-law is at the centre of an escalating row over a R1-billion tender for new government office space.

At issue is the proposed construction of new headquarters for the department of public service and administration by the Billion Group, a company linked to Lonwabo Sambudla, who is married to Zuma’s daughter, Duduzile.

According to three senior government officials with direct insight into the process, Public Service and Administration Minister Richard Baloyi and a top adviser to Public Works Minister Gwen Mahlangu-Nkabinde pushed for the deal to go ahead — and Sambudla was personally involved in lobbying for it.

Sambudla married Duduzile in a lavish ceremony in April, two months after the tender was first advertised.

Staff of both departments were present at the wedding, and Sambudla has since joined his “mentor” — Billion Group chief executive Sisa Ngebulana — in at least one meeting at the department of public works.

Senior government officials who have been briefed on the deal told the Mail & Guardian this week that Baloyi had ignored advice from his own staff and the national treasury that his department could not afford a new building. Despite this, and apparently acting on Baloyi’s insistence, the department of public works advertised the tender in February, calling for companies with available land in the Pretoria area to submit bids for the building.

This took place without the knowledge of Themba Maseko, then public service’s director general, who would ordinarily be responsible for such a decision, according to a person involved in the process. Maseko has since quit the government.

Budget allocation
Another senior public service figure who has seen the relevant documentation told the M&G that the Billion Group had been listed in fourth place in the tender evaluation but had nevertheless been recommended for the contract. The process is now stalled, this person and a senior public service department official confirmed, because of the lack of an adequate budget allocation.

The revelations come just a month after Public Protector Thuli Madonsela called on Zuma to take action against Mahlangu-Nkabinde for her role in the flawed police building-lease saga.

An official who is said by two independent sources to have pushed for the deal is Eugene Motati, special adviser to Mahlangu-Nkabinde. He was suspended abruptly last Friday after the M&G sent questions about the deal to her department.

A government figure critical of Mahlangu-Nkabinde argued that Motati was taking the fall for his political principals. But a senior government official close to the minister said Motati was shown the door after she discovered he had been using her name to push for the Billion Group.

Motati told the M&G that he had asked for special leave to deal with family matters.

Sambudla and Ngebulana confirmed this week that they were friends and admitted having a business relationship involving property brokering. Motati also confirmed knowing Ngebulana.

Although Ngebulana said that Zuma’s son-in-law did consulting work for the Billion Group from “time to time”, he claimed that the company had paid Sambudla only once for “a property transaction — unrelated to the current matter … The fee was calculated and paid in accordance with the [South African Property Owner Association] tariff.” He declined to disclose the amount.

The M&G‘s sources insist that both men were involved in lobbying civil servants and politicians for the public service deal to go ahead, and it is clear that they met department officials together on at least two occasions.

Senior officials from both departments who are directly involved in the tender process were invited to Sambudla’s wedding in April, while the process was under way. A day before the wedding, the officials were entertained by Sambudla and Ngebulana at ZAR nightclub in East London. Those who attended included Motati and public service and administration’s chief director of strategic management, Thuli Manzini, who had been driving the process of finding a new building, according to department insiders.

Sambudla said he did not see anything wrong with officials from both departments attending his wedding. He said he regarded Manzini as a “mother figure” who had helped him before. “People came to my wedding not because of the … tender. I invited a lot of people because of other interests. I have been doing business not only now that I am married to the daughter of the president … Those who do not like me would say I am now getting favours because I married the president’s daughter. In fact, it prejudices me.”

Sambudla said he had been involved in the property business long before his relationship with Duduzile. “I have always been doing brokering. I would put together [property] deals and take them to big players because as blacks we do not have money. Even people in the industry advised me to continue with this [brokering] because I have connections.”

He said he had done a number of deals with the Billion Group. “We have an official commercial relationship. I took a lot of deals to them. Some worked, some did not. Sisa [Ngebulana] has been a mentor to me. He’s pleasant to work with. He is an astute businessperson. I look up to him. I know if I get into a deal with him, I won’t go wrong.” Ngebulana said that he had introduced Sambudla to the public works department before his relationship with Zuma’s daughter started.

He denied that he and Sambudla had lobbied for the tender, but admitted meeting acting public works director general Sam Vukela in April. He confirmed that Sambudla was present during the meeting but insisted it had nothing to do with the public service department tender. “At the time, Lonwabo [Sambudla] happened to be in the building and I went with him to see the director general.”

Vukela told the M&G this week that he had met Sambudla and Ngebulana on several occasions because the two had other business dealings with the department of public works.

The preferred bidder
Ngebulana, whose Billion Group entered two bids through two of its subsidiaries — Alkara 334 and Zacacode — said he was aware of claims that Motati had put public works officials under pressure to recommend his company as a preferred bidder.

“I confronted him about this. I don’t interact with politicians on deals. We are a successful business. We don’t need someone’s favour,” said Ngebulana.

But Motati, who claimed he only heard about the tender after the M&G‘s questions this week, denied that Ngebulana had ever confronted him about the issue.

“Sisa [Ngebulana] is lying. Instead, he called me to say he is meeting you [the M&G]. He was concerned whether he should tell you that we know each other. I said I see no reason we should deny knowing each other. I am not a businessman. I did not join the ministry to become a businessperson.”

Although Baloyi, through his spokesperson, Dumisani Nkwamba, this week dismissed as “malicious and baseless” the allegations that he was personally involved in the tender process, two senior departmental officials close to him told the M&G that the minister gave the green light for the tender to be issued after he had held discussions with his counterparts at public works.

Nkwamba, however, said: “The process of securing an office building is an administrative and ­operational matter that the minister does not and has not played a role in whatsoever.”

Nkwamba could not say whether or not the department had budgeted for the new building.

In an interview with the M&G this week, Motati confirmed that he was aware that Baloyi’s department did not have the budget for the building.

The public works department, meanwhile, denied that Mahlangu-Nkbabinde was interfering in the tender process.

“For the record, the department of public works would like to state that the minister does not get involved in tender processes as this is an administrative function,” it said in a statement.

Zuma’s communication team could not be reached on Thursday.