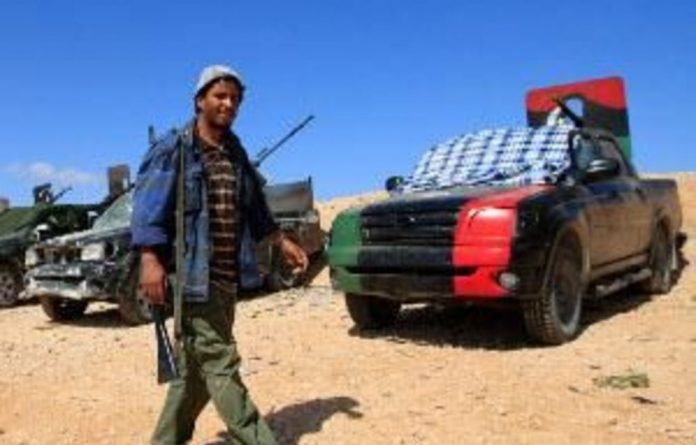 Libyan government forces and rebels clashed around the western town of Zawiyah on Saturday as insurgents tried to push ever closer to Tripoli.

Reporters heard gunfire and skirmishing in the coastal town, about 50km west of Tripoli. The highway from the capital to the Tunisian border had been blocked.

The government confirmed fighting in the area but said a rebel attempt to capture Zawiyah had been beaten back.

“A very small group of rebels tried to move into the south of Zawiyah but they were stopped easily because of our armed forces,” he said.

According to Ibrahim, fewer than 100 rebels entered the city from the south and tried to join up with 50 rebels within the city. Government forces were still fighting the rebels inside the city, he said.

There was no immediate report from the rebel side.

Attacking the lifeline
The rebel forces trying to overthrow Libyan leader Moammar Gaddafi hope to capture Zawiyah and cut off his stronghold in the capital from access to the outside world by severing the coastal highway, which has been a lifeline for the embattled government.

They advanced north to within 25km of Zawaiyah earlier in the day following what they said was a six-hour battle which pushed the front line closer to Tripoli.

Fighters said they had pushed government troops back about 7km from their previous positions, fixing a frontline about 5km north of the village of Bir Shuaib, near a diaper factory.

They said it had been a heavy battle, with pro-Gaddafi forces using anti-tank guns. A medic said three rebel fighters were wounded before government troops withdrew, the rebels said.

Rebels killed
In other fighting on two fronts well to the east of Tripoli, at Brega and near Misrata, at least 21 rebels and six soldiers were killed over the past two days with some 50 rebels wounded. Neither side claimed major advances in the past 24 hours.

Judging by impact craters, wrecked buildings and burnt out tanks, Nato warplanes have also bombed government military targets on the route of the western rebel advance to Zawiyah over the past week, providing close air support.

‘Massacre’
The Gaddafi government brought dozens of villagers and tribesmen to Tripoli on Friday to tell of Nato air strikes this week in Majar, near Zlitan, that it said killed 85 civilians.

Aya Attiya, a five-year-old with scars covering her face, was brought forward to testify about an attack that the government said was further proof that Nato had overstepped its mandate to protect civilians.

One man seen in footage of the meeting, to which most foreign press corps was not invited, said he had fled to Majar from the eastern city of Benghazi and had lost his three children in the attack.

Nato has said it could not confirm whether any civilians were killed in the bombing and said its surveillance confirmed the compound was a military accommodation site and staging base.

Coastal lifeline
Zawiyah is the home town of many of the rebels battling on the western front and has staged two uprisings against Gaddafi since the nationwide revolt broke out in February. Both have been crushed it remains in government hands along with its refinery and harbour on the Mediterranean coast.

On Libya’s most easterly front, at least 21 rebels and government soldiers were killed in fighting for the oil terminal of Brega in the past two days, hospital workers said.

A volunteer at the hospital in Ajdabiyah, where fighters wounded in Brega were taken, said 15 rebel fighters had been killed and about 50 wounded. He said the bodies of six government soldiers were brought in on Friday.

The Libyan state news agency JANA reported that six “martyrs”, all men, were killed in a Nato raid on Brega, and the alliance confirmed it had targeted two armoured vehicles.

Rebels killed
In fighting around a second eastern front in Misrata, much closer to Tripoli, at least six rebels were killed in the past 24 hours, rebel sources said.

A spokesman from the Brega battle said rebels were fighting their way south from the residential town towards the terminal, 15km away and had knocked out two government tanks.

Gaddafi’s forces still control the port, oil terminal and refinery in Brega, which has changed hands several times over months of fighting in eastern Libya. His opponents are intent on seizing the oil facilities to begin exporting oil from Brega.

In Misrata, a port on the Mediterranean under rebel control for months, six rebel fighters were killed in fighting on Friday. There was no word on government casualties.

Three rebels were killed west of the city in fighting for Zlitan, west of Misrata. Further south, three more died in battles with Gaddafi’s forces in the town of Tawargha.

Gaddafi is clinging to power despite a five-month-old Nato air campaign, the tightening of economic sanctions and a lengthening war with the rebels trying to end his 41-year rule.

The rebels have seized large swathes of the North African state but are divided and fighting on three fronts. — Reuters

Claims of favouritism stalk the game, but the data on penalties paints a picture at odds with righteous indignation
Read more
World