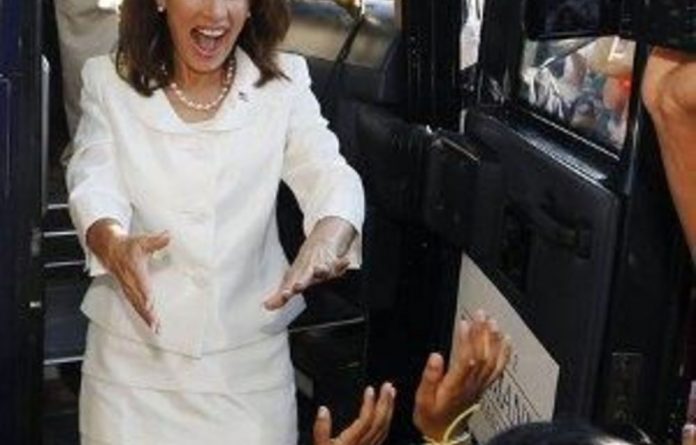 Michele Bachmann won the Iowa straw poll on Saturday in the first big test of the 2012 Republican presidential campaign, as Texas Governor Rick Perry launched a White House bid that could reshape the race.

Bachmann, a US representative from Minnesota, narrowly edged out Ron Paul and rolled over the rest of the field to capture the non-binding mock election, an early gauge of strength in the state that holds the first 2012 Republican nominating contest.

“This is the very first step toward taking the White House in 2012,” Bachmann told a small crowd of supporters outside her campaign bus on the straw poll grounds. “Now it’s on to all 50 states.”

In South Carolina, Perry formally jumped into the race with a blistering attack on President Barack Obama.

The straw poll and Perry’s campaign launch, coming less than six months before Iowa’s nominating contest, promised to reshuffle the Republican field fighting for the nomination to challenge Obama, a Democrat, in 2012.

Perry, a staunch social conservative with a strong job creation record in Texas, is expected to immediately vault into the top tier of contenders along with front-runner Mitt Romney. Perry visits Iowa on Sunday.

In the straw poll, Bachmann won with 29% of the vote. Paul, a US representative from Texas, was a close second with 28% and Pawlenty had 14%

Bachmann’s win adds to her recent momentum and cements her standing in the top tier of contenders. She had shot to the top of opinion polls in Iowa this summer with the support of social conservatives and the fiscal conservative Tea Party movement.

Questions for Pawlenty
Pawlenty’s showing raised questions about his ability to continue in the race after spending $1-million in Iowa. He has been mired in the low single digits in polls in the state and nationally.

“We made progress in moving from the back of the pack into a competitive position for the caucuses, but we have a lot more work to do,” Pawlenty said in a statement. “We are just beginning and I’m looking forward to a great campaign.”

Perry finished sixth with 3.6% of the vote even though he was not on the ballot. That was more than Romney, the former Massachusetts governor who was on the ballot but did not participate in the poll. He finished seventh.

Six Republicans had paid to erect tents and speak at the event, pleading for support from voters who rolled into the site in dozens of buses and jammed candidate tents for music and free barbecue.

Lines were long at the tents hosted by Bachmann and Pawlenty, who competed for the votes of the social conservatives who dominate the Iowa nominating contest. The supporters of Paul, a libertarian with a loyal following, swarmed the grounds and jammed the arena when he spoke.

The 16 892 votes was the second biggest straw poll turnout behind the nearly 24 000 cast in 1999, when then-governor George Bush of Texas won on his way to the White House.

Clara Bulens of Grinnell, Iowa, said she traveled to the poll to vote for Bachmann because “she’s beautiful, brilliant, very personable and I love her platform”.

The poll, a fund-raiser for the state party, created a carnival atmosphere around Iowa State University’s basketball arena in Ames. Any Iowa resident over 18 could show up and participate, with many allowing a candidate to buy their $30 ticket.

The poll has a record of winnowing the poor performers from the field, but a straw poll victory is not always a harbinger of later success. Romney won in 2007 but lost the Iowa caucuses to Mike Huckabee, who was a surprise second-place winner in the straw poll.

Bush’s father lost in 1987 before winning the presidency and Bob Dole tied in 1995 before capturing the Republican nomination the next year.

Finishing fourth on Saturday was former U.S. Senator Rick Santorum, with businessman Herman Cain in fifth ahead of Perry. – Reuters