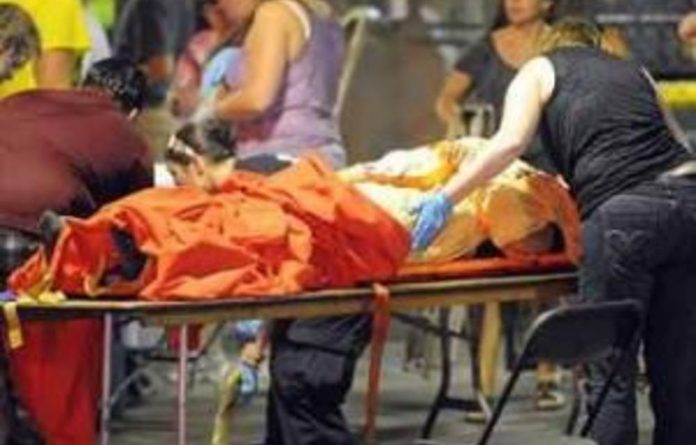 A fifth person has died from the collapse of an outdoor concert stage in heavy wind just before a weekend show at the Indiana State Fair, authorities said on Sunday.

More than 40 people were injured in the collapse on Saturday night, Indiana State Police said.

A stage collapsed during a powerful storm, sending steel scaffolding into the terrified crowd below and killing at least five people among fans awaiting a performance by the country band Sugarland.

The collapse happened moments after an announcer warned of the advancing storm and gave instructions on what to do in event of an evacuation. Witnesses said a wall of dirt, dust and rain blew up quickly like a dust bowl and a burst of high wind toppled the rigging. People ran amid screams and shouts, desperate to get out of the way.

Hundreds of concert-goers rushed afterward amid the chaos to tend to the injured, many with upraised arms seeking to lift heavy beams, lights and other equipment that blew down onto the crowd. Many of the injured were in the VIP section closest to the stage. Emergency crews set up a triage centre in a tunnel below the grandstand at the Indianapolis fairgrounds.

About 40 people were injured, including at least one child, WTHR reported. Witnesses reported seeing many people with head and neck injuries and broken bones.

Death toll
Indiana State Police First Sergeant Dave Bursten said the number of injured could rise because some people may have taken themselves to hospitals.

Bursten said the injuries ranged from cuts and scrapes to “very serious injuries” and that it was a “very likely possibility” that the death toll could also mount.

Emergency crews continued to search the fairgrounds early Sunday to ensure there were no other injured concert-goers who might have wandered off after the collapse, Bursten said.

Fair officials cancelled all activities Sunday. The fair, which runs through August 21, was expected to resume Monday with a service honouring the victims, he said.

Bursten said emergency personnel and fair officials were monitoring the weather because a severe storm had been expected to hit the area around 9.15pm. But the storm hit shortly before 9pm.

He said preparations were being made to evacuate the facility but that the “significant gust of wind” struck the stage rigging that holds lights and other equipment before the evacuation plan was activated.

“As we all know, weather can change in a very rapid period of time,” he said.

Weather warnings
Concert-goers said the opening act by Sara Bareilles had finished and the crowd was waiting for Sugarland to take the stage. They said an announcer had alerted them that severe weather was possible and gave instructions on what to do if an evacuation was necessary but the same announcer said concert organisers hoped the show would go on, and many fans stayed put.

The wind that toppled the rigging came just minutes after that announcement, fans said.

“It was like it was in slow motion,” concert-goer Amy Weathers told the Indianapolis Star. “You couldn’t believe it was actually happening.”

Associated Press (AP) photographer Darron Cummings was in the audience attending the concert as a fan shortly before the collapse. He said he and his companions sought shelter in a nearby barn after seeing the weather radar.

Sugarland tweeted about the incident about an hour after it happened.

“We are all right. We are praying for our fans, and the people of Indianapolis. We hope you’ll join us. They need your strength,” the band said. — Sapa, AP