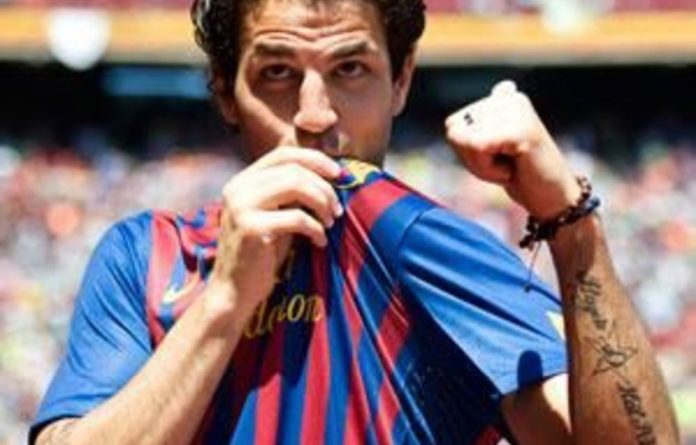 The void left in Arsenal’s midfield by the sale of ex-captain Cesc Fabregas has been exposed in the Gunners’ first two matches of the season.

Arsenal laboured to a 0-0 draw against Newcastle in the Premier League last weekend and then narrowly held on to an early 1-0 lead in the first leg of its Champions League playoff against Udinese on Tuesday night.

Fabregas, who signed a five-year contract with boyhood club Barcelona on Monday, had provided the spark and vitality in Arsenal’s midfield in recent seasons.

“We’ve just got to carry on,” Walcott said after the Udinese match. “It’s time to move on. [Fabregas] was a great player for the club, but he’s gone.

“We still have some very talented players in the squad here and we believe we can achieve something this year.”

Playmaking
Jack Wilshere is likely to fill the playmaker role vacated by Fabregas, but the England international injured his right ankle in a preseason match July 31 and it’s not clear when he will return. Wilshere was wearing a protective boot on his ankle in a hallway at Emirates Stadium before Tuesday’s match, signalling there could still be some time before he is fit.

Tomas Rosicky, who passed a late fitness test to start on Tuesday night, is filling the role in Wilshere’s absence. But he has failed to show anything near Fabregas’ vision and flair in midfield so far.

Arsenal showed early on Tuesday night that it can create attacking opportunities without Fabregas. Bacary Sagna lifted a ball over Udinese’s defence, finding Aaron Ramsey. The midfielder burst down the right before delivering a perfect cross right in front of goal for Walcott, who volleyed off his right shin to make it 1-0 in the fourth minute.

Arsenal enjoyed the bulk of possession in the first half, but lacked any creativity or punch in midfield from that point on. Udinese had several chances to equalise.

“We tended to drop off a bit and there were gaps appearing,” Ramsey said.

Frailty
Arsenal’s midfield may soon get even thinner, with transfer speculation linking Samir Nasri with a move to Manchester City.

Over the past few seasons, Arsenal has also shown a defensive frailty that many critics believe has cost the club silverware. The Gunners’ defence was stretched thin on numerous occasions on Tuesday, most tellingly in the 25th minute. Pablo Armero sliced in between Arsenal’s fullbacks who stood motionless as he blazed past them. Armero charged through on goal unopposed before unleashing a powerful shot that was parried by Wojciech Szczesny.

At the start of the second half it required a last-ditch intervention by Johan Djourou to block a shot from Udinese captain Antonio Di Natale, who was his team’s most dangerous threat.

A freekick was also pushed wide by Szczesny with 15 minutes remaining — leaving many Arsenal fans nervous in the last minutes.

Wenger — who has made four signings this summer including Côte d’Ivoire forward Gervinho — has pleaded for patience. The three other signings were young prospects for the future.

“At the moment, we need the fans to be on our side,” the manager said. — Sapa-AP