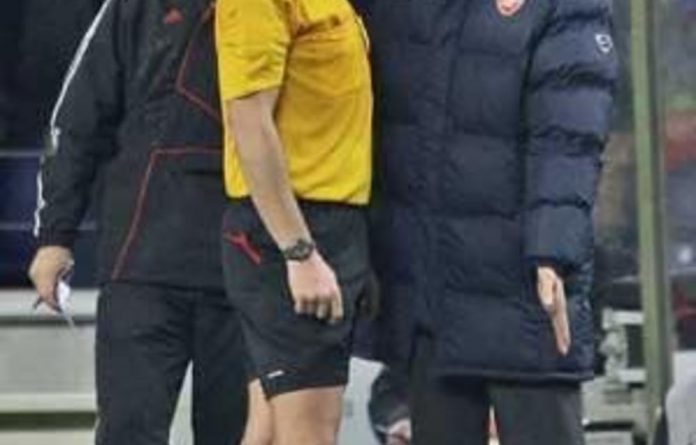 Arsenal’s miserable start to the season hit a new low as a freak own goal from Aaron Ramsey put Liverpool on course for a 2-0 win over the 10-man Gunners at the Emirates Stadium on Saturday.

Ramsey put through his own net in the closing stages when an attempted clearance from young defender Ignasi Miquel struck the Wales midfielder in the head and flashed past stunned Gunners goalkeeper Wojciech Szczesny.

That bad break came soon after the dismissal of teenage midfielder Emmanuel Frimpong for an ugly foul on Liverpool’s Lucas Leiva.

Luis Suarez added Liverpool’s second goal in stoppage time to give the Reds their first win at Arsenal for 11 years.

It was a miserable conclusion to a depressing week for Arsenal manager Arsene Wenger, whose team has taken just one point from their first two Premier League matches and are yet to score their first goal of the domestic season.

Hot water
Wenger saw Cesc Fabregas complete his transfer to Barcelona on Monday and the Frenchman’s week hardly improved when he found himself in hot water with UEFA for flouting their rules over communication with the bench while he served a touchline ban in a lacklustre Champions League win over Udinese.

Samir Nasri started for the Gunners amid rumours that his mooted transfer to Manchester City has broken down.

After losing defenders Johan Djourou and Kieran Gibbs to injuries in midweek, the last thing Wenger needed was to see French centre-back Laurent Koscielny forced off with a back problem in the first half.

There was worse to come for Wenger as Frimpong, 19, was dismissed in the 70th minute when his foul on Lucas earned a second yellow card from referee Martin Atkinson.

It was the second dismissal in two league matches for Arsenal after Gervinho’s red card at Newcastle.

Bragging rights
In the day’s other early match, Newcastle earned the bragging rights in the Tyne-Wear derby as Ryan Taylor’s free-kick clinched a 1-0 win over bitter rivals Sunderland at the Stadium of Light.

Taylor struck with a curling effort in the second half to give the Magpies their first Premier League win of the season and leave Sunderland still with only one home victory over their hated neighbours in the last 30 years.

To cap a bad day for the Black Cats, defender Phil Bardsley was sent off in the last minute for a foul on Fabricio Coloccini. — AFP