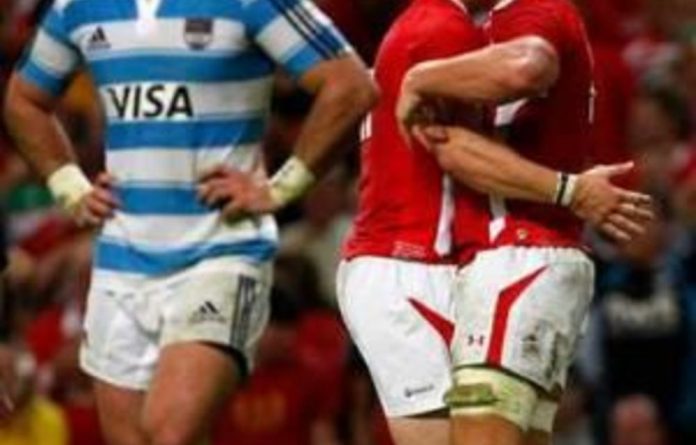 Wales cruised past 2007 World Cup semi-finalists Argentina with a 28-13 victory at the Millennium Stadium in their final warm-up test ahead of September’s Rugby World Cup.

Argentina dominated the opening exchanges but they were hit by a sucker punch by Wales who grabbed two quick fire tries through Andy Powell and Alun Wyn Jones with James Hook converting both.

Hook stretched Wales’ lead with a succession of second-half penalties before George North crashed over for yet another try.

Argentina grabbed a late consolation through Martin Scelzo which Felipe Contepomi converted but the result was already beyond doubt.

Wales were determined to build on the triumph over England last weekend and enter their world cup opener against world champions South Africa on September 11, on the back of two victories.

One worry, though, for Wales was they lost veteran fly-half Stephen Jones before kick-off, with a recurrence of his calf injury, with Scott Williams stepping up to the bench.

But Wales led by Martyn Williams, who won his 99th cap, comfortably completed their mission.

Full scale offensive
The Pumas gave the hosts a real scare early on after Contepomi threaded a grubber along the touchline.

Leicester Tigers’ Horacio Agulla scorched-up the wing and beat Jonathan Davies to the ball but it had brushed the touchline on the bounce.

Wales had their first chance 18 minutes into the scrappy encounter but Davies was unable to hold on to Hook’s pass following a Tavis Knoyle quick tap.

Contepomi opened the scoring on 29 minutes with a well-taken penalty. Moments later the Argentine fly-half had the chance to extend the visitors lead but was once again off target with the boot.

Wales took full advantage moments later when they surged into the lead thanks to Powell’s first ever try for his country.

Knoyle broke off the back of a scrappy scrum and linked with second row Jones who then released Powell to race into the corner. Hook expertly slotted the touchline conversion and they grabbed a second quick-fire try within moments of the restart.

Jamie Roberts offloaded out of contact to release George North and the Scarlets flyer beat his opposite number and Contepomi before drawing Martin Rodriguez to put Jones over for a try of his own.

Efforts bear fruit
Hook was again on target to hand Wales a 14-3 half-time lead. Wales started the second half with much better effect than the first and they got their reward with a Hook penalty on 44 minutes.

He added a second on 53 minutes to extend Wales’ lead to 20-3. Argentina was dealt a blow when Juan Fernandez Lobbe was sent to the sin bin after taking Jones out at the restart.

Contepomi struck-back with a penalty on 62 minutes to reduce the deficit to 20-6. Wales made a raft of replacements in the final quarter and it was no surprise that the game lost its shape and rhythm.

They were dealt a World Cup scare when Roberts limped off with what appeared to be a dead leg. But the hosts finished in style with North crashing over for his seventh try in nine matches for Wales.

It was a well-worked move by Wales, they sucked in the Pumas’ defence and spread the ball wide to centre Davies who flicked a pass inside to North.

Argentina grabbed a late consolation try with a trademark drive over maul which Contepomi converted but it was not enough and Hook added a final penalty at the death. — AFP