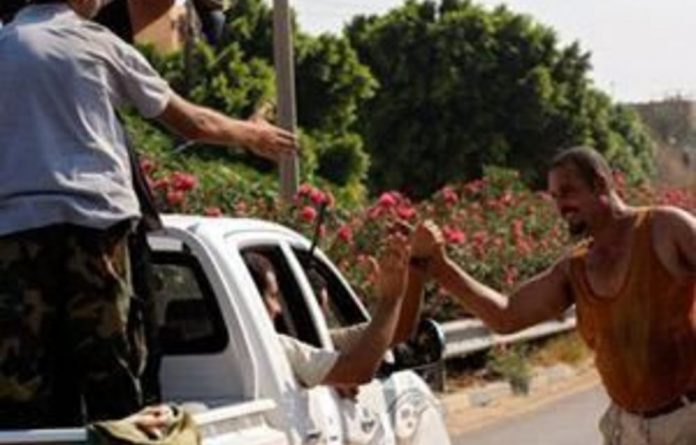 The implosion of Libyan leader Muammar Gaddafi’s 41-year-old rule will put a new spring in the step of the Arab revolutions and demonstrate once again that these entrenched autocratic governments are not invincible.

From the Atlantic coast to Gulf shores, live images on Arab satellite channels of rebels pouring into Tripoli, trampling on pictures of Gaddafi and chanting “From alley to alley, door to door”, taunting the leader with his own threats to hunt down his enemies, will rattle Arab leaders facing similar revolts.

Arab capitals have been enthralled as street protests forced Tunisia’s Zine al-Abidine Ben Ali to flee the country he had ruled for 23 years and Egypt’s Hosni Mubarak to step down after 30 years in power and now Gaddafi’s government to decompose.

Arabs who this month have seen Mubarak and his sons appear behind bars and who now see the rule of the longest-serving Arab ruler collapsing must wonder what else is possible.

From Syria to Yemen, Arab autocrats who sought to use force and repression to contain pent-up popular aspirations and fend off uprisings must have pause for thought after events in Libya.

“It is an important development because it shows there are different ways in which Arab regimes will collapse. It just shows once you get a momentum developing and the right combination — a popular will for change and regional and international support — no regime can withstand that,” said Beirut-based Middle East analyst Rami Khouri.

“Syria has this combination of a popular uprising with regional and international backing. These authoritarian regimes, even if they are strong, collapse in the end. We have three transitions now, Tunis, Egypt and Libya and more are to follow.”

Khouri said a revolt in Bahrain by a Shi’ite majority seeking more rights from the Sunni Al Khalifa ruling family had failed because it lacked regional and international backing.

It is true, experts say, that Gaddafi’s downfall depended crucially on Western military intervention, which evidently is not going to be repeated in Syria or elsewhere — debt-laden Western powers, still deeply involved in Iraq and Afghanistan, have no appetite for new fronts in the Muslim world.

The five-month Nato bombing campaign in Libya prevented Gaddafi’s forces from recapturing the rebel city of Benghazi and quelling the revolt that erupted on February 17, which would have been a discouraging reversal for restive Arabs elsewhere.

Persistence pays
“It shows that if the protesters, opposition, freedom fighters or rebels in Yemen or in Syria persist they may be able to topple the regime,” said Middle East analyst Geoff Porter.

“People’s views of the Arab spring were formed by Tunisia and Egypt where protests lasted up to a month. They thought Libya will be impossible because it didn’t fit the Tunisia and Egypt model,” he said. “Libya’s protests will encourage and embolden protesters in Syria and Yemen although they miss a big component which is the support of Nato.”

Scenes of popular rejoicing in Tripoli after Gaddafi’s forces apparently melted away suggest many in the capital had loathed their leader, but had not previously dared defy him for fear of retribution.

“This is another day, a new page in Libya’s history. We are witnessing a new dawn and a new history of freedom,” said Mohammed Derah, a Libyan activist in Tripoli.

Anti-Gaddafi demonstrations in Tripoli early on in the revolt were forcibly suppressed.

“Libya showed that Gaddafi didn’t have the support he claimed he had. One may be able to make the comparison to Syria and Yemen where joining a revolution is a big risk. [People] may not support the regime but they wouldn’t risk their lives until rebels show up,” Porter said in reference to the paucity of demonstrations in Syrian cities such as Damascus and Aleppo.

Experts said economic and oil sanctions imposed on Gaddafi had played a big role in bringing his forces to their knees and similar actions against Syria could have a similar impact.

Al-Assad, who faces growing international calls to step down over his crackdown on more than five months of protests which UN officials say have cost about 2 000 civilian lives, warned the West on Sunday that Syria would not tolerate any outside interference, saying unrest had become more militant.

“As for the threat of a military action … any action against Syria will have greater consequences [on those who carry it out], greater than they can tolerate,” he said.

No country has proposed any military intervention in Syria, which borders Israel, Lebanon, Iraq, Turkey and Jordan — and has powerful allies in Shi’ite Iran and Lebanon’s Hezbollah.

“Assad is probably afraid he will be in the same camp but he thinks he has different international relations than Gaddafi, who had no friends. Al-Assad has the support of Tehran and Hezbollah and that changes the international community’s calculus,” Porter said.

For Khouri, the Libyan rebel success will shake the confidence of rulers such as Al-Assad, who apparently believe their military-backed governments are immune to popular discontent.

“Assad lives in a world of his own. He doesn’t live in a real world. He is oblivious to the new reality. These dictatorships feel invincible,” Khouri said

“What we are seeing is that they are not invincible. They are very vulnerable. Most of these regimes have been in power for decades and decades and have reached the end of the line.”