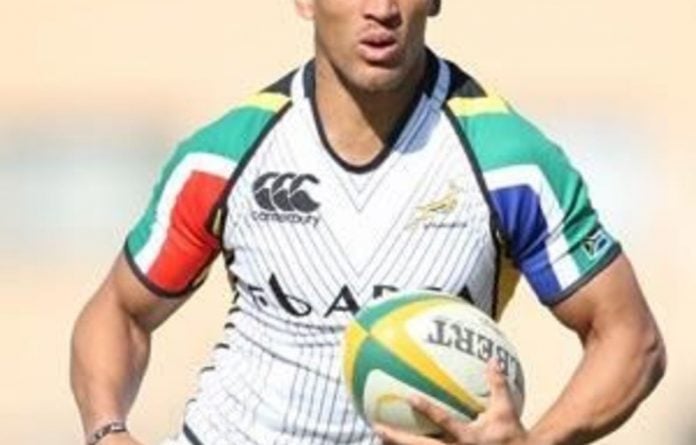 Making the final group of 30 Springbok players for next month’s Rugby World Cup in New Zealand has left Gio Aplon on cloud nine, the Springbok speedster said this week.

“It is an incredible feeling to be in this squad and I must admit, my head is in the clouds at the moment although I know it will come back down to earth as soon as we board that flight,” said Aplon.

“Receiving that cap the other night was a very proud moment for myself and my family who have always been there to support me.”

Aplon’s career has had its twists and turns which contributed to him being one of the late bloomers in the team.

He said playing a role in Paul Treu’s triumphant Springbok Sevens squad, had helped him rekindle his love for the game.

The 28-year-old Aplon was part of the Blitzbokke team which won their maiden IRB Sevens Series title in the 2008-2009 season under Treu’s guidance.

Should he add the most sought after title in world rugby to his list of accomplishments, he will be in a league of his own.

“It will be amazing if I can one day look back and say that I’ve won both, but I’m not thinking of it like that,” he said.

“The team comes first and although this is a once-in-a-lifetime opportunity for me, the team always comes first.”

Upon his return to the 15-man code, and his beloved Western Province, his blistering pace and ability to read the game made him a unique weapon most coaches desire to have in their team.

Aplon said the transition was not the easiest, and he had to learn to be more patient.

“In sevens, there is so much more space to express yourself, while in 15’s you have to rely less on instinct and stay within the set structures of the team,” said Aplon.

Whether he will be deployed at fullback or wing during the tournament in New Zealand is one of the decisions with which Springbok coach Peter de Villiers will have to wrestle.

Often criticised for being too small, Aplon fine-tuned his defensive skills in an arena where one missed tackle could cost your side seven points.

He also worked hard at improving his kicking game while his counter-attacking abilities make him a serious threat at the back.

“All I know is that when I get a chance in New Zealand, I will do what I can to help my team no matter what, even if that means being patient.” — Sapa

Stormers defence wins out against Cheetahs

All eyes on Bok top job

Beast bets Boks’ best is yet to come