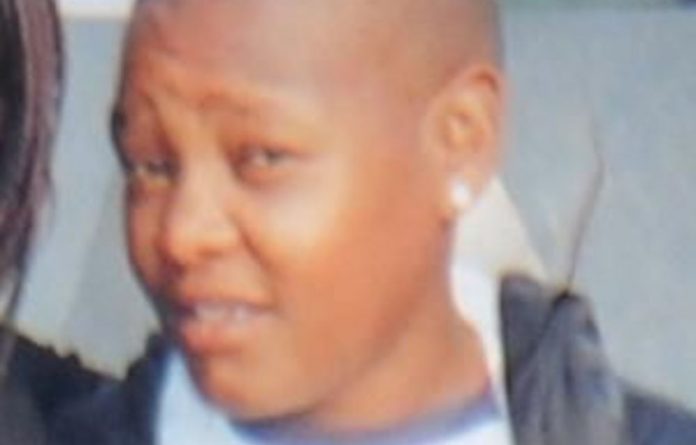 Hundreds of gay rights activists and their supporters marched to the KwaThema police station on August 19 to voice their frustration over the police’s “inaction” about solving a spate of hate murders and so-called ­”corrective rapes” in Johannesburg’s East Rand townships.

As they marched they sang “Noxolo is not sleeping” — a reference to lesbian activist Noxolo Nogwaza, whose battered body was found in a township ditch in April.

“It’s been three months since Noxolo was brutally murdered but we have seen no progress.

“We want the police to speed up the investigations,” said Lindi Masindwa, deputy chairwoman of the ANC Women’s League in Ekurhuleni. Masindwa is also a member of the Ekurhuleni Pride Organising Committee, which organised last Friday’s protest.

In light of the recent spate in sexuality based violence, particularly in townships, communities across South Africa are outraged. We travel to Kwa Thema, home of the latest victim.

The group presented a memorandum to Ekurhuleni metro police department chief Hlula Msimang, calling for an end to homophobia in the police service and for a greater commitment to investigating hate crimes against gays and lesbians.

Nogwaza’s cousin, Nonyaniso Nogwaza, told the Mail & Guardian that the family had made several attempts to get an update from the police but were repeatedly told that “the case is still under investigation”.

“The only way to bring peace to our hearts is if the police find the ­people who killed Noxolo and bring them to justice,” Nogwaza said.

It is not the first time gay rights activists have marched to the KwaThema police station. In 2009 the murder of another lesbian, Girly Nkosi, sparked similar outrage, but the perpetrators have still not been found. “We don’t want [Noxolo’s] case to go up in smoke like Girly’s,” said Masindwa.

In May this year Parliament set up a national task team to deal with hate murders and “corrective” rape, but activists question its effectiveness.

Free Gender director Funeka Soldaat, a member of the task team, said she was frustrated by the lack of progress and doubted that the government had a budget to fund the initiative. “I’m not sure if the government was ready to establish such a team,” she said.

“I think they were just responding to national and international pressure.”

Carrie Shelver, co-ordinator of One in Nine, a gender-justice organisation, agreed that the “real work” had not yet started. “It’s been slow because of the haphazard relationship between civil society and the government,” she said.

Shelver added that she hoped the task team was not just a “public relations” stunt.

The Ekurhuleni Pride Organising Committee has given the KwaThema police and the provincial commissioner of the SAPS, General Mzwandile Petros, 30 days to answer the demands in their memorandum.

If no one responded, the committee said, its members would march to Petros’s Johannesburg office.

“We will continue living in fear unless the criminals are brought to justice,” said protester Leonard Nkosi.

At the time of going to press the M&G had not received comment from the department of justice.

Shutting down the blaming of women for rape

On Wednesday, women and gender non-conforming activists marched to mark the start of Women’s Month in South Africa and to say ‘enough is enough’
Read more
National

Slice of Life: ‘We’re told to be cold’

​'I was working on a story on male corrective rape and, during that time, I had this recurring dream.'
Read more
Opinion

070707: 10 years on and the struggle against homophobic hate crimes continues

The ​07-07-07 Campaign​ was borne out of this uproar with the tagline “Act to end hate”.
Read more
Opinion

Many men, thanks to social stigmas, are ashamed to report sexual hate crimes – but they are almost as common as they are against lesbians.
Read more
Friday

Zanele Muholi: The task of mourning