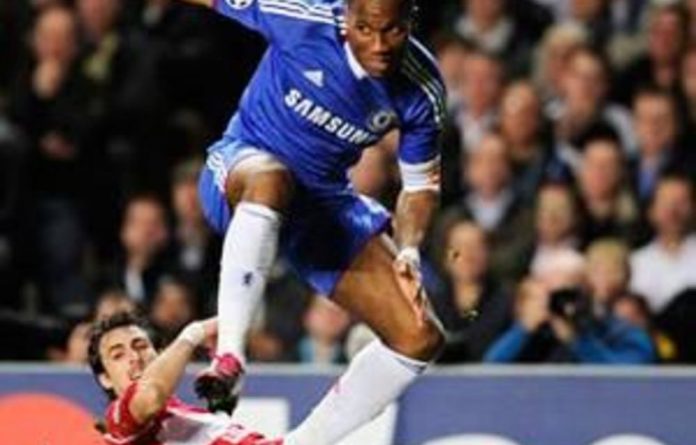 Chelsea left it late to clinch a 3-1 victory over 10-man Norwich that was marred by a serious injury suffered by Didier Drogba at Stamford Bridge on Saturday.

Andre Villas-Boas’s side were in danger of being held to a draw by newly-promoted Norwich when Grant Holt punished a mistake from Blues goalkeeper Hilario to cancel out Jose Bosingwa’s opener.

Drogba was stretchered off soon after when he landed heavily following an aerial collision with Norwich goalkeeper John Ruddy.

Lampard ensured Chelsea won for the second time in three league games under Villas-Boas when he drove home a spot-kick with eight minutes remaining before Juan Mata marked his debut following his move from Valencia with a goal in the final moments.

“We are just waiting for the full exams on his concussion and hopefully nothing is wrong.”

Unlikely source
Chelsea’s sixth minute opener came from an unlikely source as Portugal right-back Bosingwa netted his first goal since November 2008 with a powerful long-range effort that flashed in off a post.

That should have been the springboard for a dominant Chelsea display, yet Holt equalised in the 63rd minute.

Holt was given a large helping hand by Hilario — playing in place of the injured Petr Cech — as the Portuguese stopper came way off his line in a failed attempt to catch a Wes Hoolahan cross and Holt was able to hook into the empty net.

It got worse for Chelsea moments later when Drogba landed in sickening fashion following his collision with Ruddy and the game was stopped for seven minutes while the Ivorian was carried off wearing a breathing aid.

However, Lampard got the second goal from the spot after Ruddy was sent off for bringing down Ramires and Spain winger Mata, on as a substitute, struck with a curler deep into stoppage time.

Liverpool moved to the top of the table, above Chelsea and Wolves on goal difference, after a 3-1 win against Bolton at Anfield.

Kenny Dalglish’s side were on course for their second league win of the campaign from the moment England midfielder Jordan Henderson — a £16 million signing from Sunderland in the close-season — curled home a fine finish for his first Reds goal in the 15th minute.

Impressive display
Martin Skrtel put Liverpool in complete control in the 52nd minute when the Slovakian defender headed in from Charlie Adam’s corner.

Former Blackpool midfielder Adam sealed an impressive display from Dalglish’s team when he drilled a low shot past Jussi Jaaskelainen one minute later to claim his first goal for the club.

Bolton striker Ivan Klasnic got one back in stoppage time but it was no consolation for the visitors.

Blackburn missed two spot-kicks and then paid the penalty as Everton sneaked a 1-0 win at Ewood Park.

Rovers squandered a chance to take the lead early in the second half when Tim Howard saved Junior Hoilett’s penalty after Mauro Formica made the most of minimal contact from Ross Barkley to win the spot-kick.

Formica missed from the spot himself — shooting against a post — after being fouled by Phil Jagielka in the final minutes.

Everton made the hosts pay for those misses when Spanish midfielder Mikel Arteta stroke home a 90th minute penalty controversially awarded by Lee Mason for a Chris Samba challenge on Marouane Fellaini.

Swansea were held to a 0-0 home draw for the second successive week as Sunderland held firm in a dour struggle at the Liberty Stadium.

Wigan maintained their unbeaten start as a fine double by Argentinean striker Franco Di Santo secured a 2-0 win over QPR.