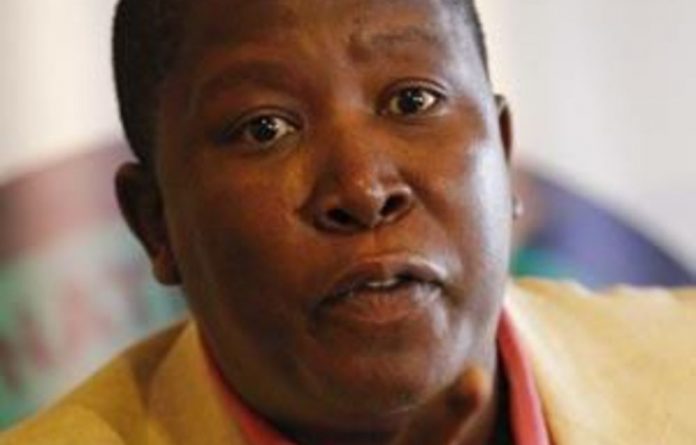 With two days left before he appears before an African National Congress disciplinary committee, ANC Youth League leader Julius Malema launched a thinly-veiled attack on President Jacob Zuma for wanting to purge him from the organisation for holding different views.

As ANC Youth League leader Julius Malema’s disciplinary hearing draws nearer, we took to the streets of Johannesburg to find out your thoughts on all things Juju.

Addressing a gala dinner for young women at the St George’s Hotel in Centurion, Pretoria, on Friday night, Malema portrayed Zuma as a weak leader who could not serve as a role model in South African society. In contrast, he hailed former president Thabo Mbeki as the best revolutionary leader the ANC had produced. In what appeared to be an attack on Zuma’s multiple relationships, Malema urged league members to emulate the lives of former ANC president Walter Sisulu and his wife Albertina by sticking to one partner, which he said would reduce the scourge of HIV/Aids.

Malema said he believed he was being targeted by Zuma because he held different views.

He urged youth league members to continue to fight for economic freedom, even when its leaders were expelled from the organisation.

Malema said he believed the charges against him were an attempt to weaken the league’s campaign for economic freedom.

“How can resolutions of congress be aligned to individuals?

Malema implied Zuma was targeting league leaders because he was not happy with the outcome of the league’s 24th national conference two months ago. It was reported before the conference that Zuma wanted the youth league’s Gauteng chairperson Lebogang Maile to replace Malema as president. Maile withdrew from the contest after it became clear that Malema enjoyed overwhelming support among delegates.

‘We defeated you on the ground’
“What the youth league is going through today is the contestation of the outcome of the league congress. People are refusing to accept the outcome of congress, from leadership and policy. Even if you fire individuals tomorrow, the resolutions of the youth league will remain. They will remain resolutions of the 24th national congress of the ANCYL. We defeated you at congress. We defeated you on the ground. Now we are being subjected to the disciplinary action,” said Malema.

With fears mounting that some in the ANC were planning to reduce the league to a “desk”, Malema urged members to defend its autonomy.

“The youth league must be allowed to think. Debates must not be stifled. As comrades, we must be able to agree and disagree.

He criticised Zuma for turning his back on people who supported him when he was in trouble with the law.

“Why would you want to fire people who stood with you? I agree with the elders that the ANC is a big elephant. But also I need to remind the elders that the ANC is not a pig. It will never eat its children, because the ANC that eats its children is no longer the ANC. There is no youth league that is in trouble. We grew in this organisation. The ANC will decide on us. We must never pre-determine what happens.”

Minister of Defence and Military Veterans Lindiwe Sisulu — who also attended the gala dinner — said the ANC would protect Malema.

Meanwhile, the league will convene meetings this weekend in a number of provinces to discuss a fight-back strategy to defend Malema and other officials.

League spokesperson Floyd Shivambu said in a statement on Saturday that the meetings would be presided over by members of the league’s national executive committee.

The league is planning to bus hundreds of its members and supporters from across the country to the party’s headquarters at Luthuli House next week to show their support for Malema ahead of the disciplinary hearing.