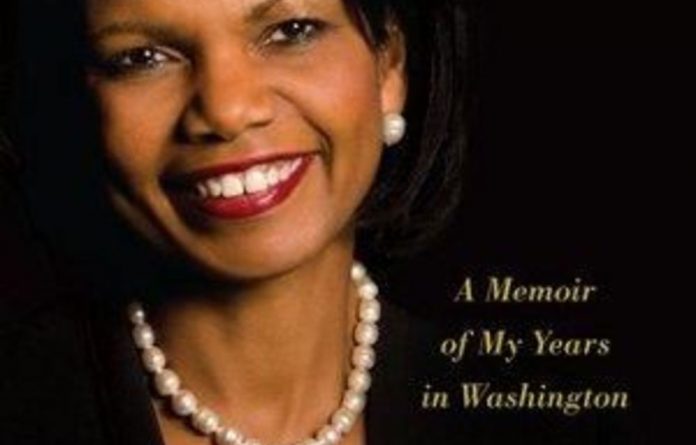 A “surprisingly candid” account of former United States secretary of state Condoleezza Rice’s years in Washington will be published this November, its publishers have announced.

Rice’s memoir, No Higher Honour, will share “her unique perspective on the most consequential political, diplomatic and security issues of the Bush administration”, from the September 11 attacks in 2001 and her appearance before the 9/11 commission, to the debates leading up to the wars in Afghanistan and Iraq. Rice, one of George Bush’s “closest confidantes”, according to her publishers, was the US’s first female national security adviser between 2001 and 2004, becoming US secretary of state in 2005.

‘It ends where most readers would probably rather it began’
The memoir, to be released on November 1 by Simon & Schuster in the UK and Crown in the US, is Rice’s second autobiography, following an account of her younger years, Extraordinary, Ordinary People: A Memoir of Family, which was published last year. Although it appeared on the New York Times bestseller list, the paper was not hugely impressed by the book, calling it “frustrating”. “Surely there’s a keen and kaleidoscopic mind in there. But that mind is rarely apparent in this softly flowing book,” reviewer Dwight Garner wrote. “Reading it, from the perspective of ideas and intellect, is like watching a Toyota Prius compete in the Indianapolis 500 … [It] ends where most readers would probably rather it began.”

This time round, Simon & Schuster and Crown promise Rice will be revealing “the behind-the-scenes manoeuvres that kept the world’s relationships with Iran, North Korea and Libya from collapsing into chaos”, and taking the reader “into secret negotiating rooms where the fates of Israel, the Palestinian Authority and Lebanon often hung in the balance”.

She will also be “surprisingly candid in her narrative of administration colleagues”, they said; whether or not she will be making any revisions following Dick Cheney’s depiction of her as naive in his own memoir, out next week, remains to be seen. A copy of Cheney’s In My Time, obtained by the New York Times ahead of next week’s publication, sees the former vice-president criticise Rice “for naivety in the efforts to forge a nuclear weapons agreement with North Korea”, as well as claim that his former colleague “came into my office, sat down in the chair next to my desk and tearfully admitted I had been right” over Bush’s controversial “16 words” claim in 2003 that Saddam Hussein tried to obtain “significant quantities of uranium from Africa”.

“Mr Cheney said that unlike other aides, he saw no need to apologise for making that claim. He writes that Ms Rice eventually came around to his view,” said the New York Times.

Rice and Cheney’s memoirs follow one from Bush himself, Decision Points, which was published last year — another “strikingly personal and candid account”, its publisher said at the time. – guardian.co.uk