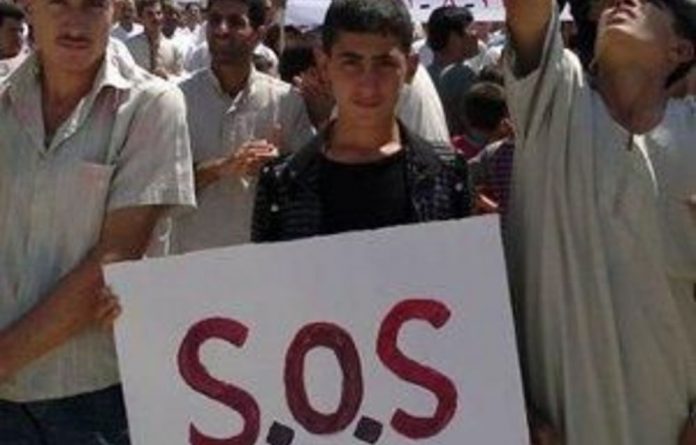 Arab states told Syria on Sunday to “resort to reason” and end months of bloodshed after some of the most intense protests in Damascus since the start of the uprising against President Bashar al-Assad.

Arab League foreign ministers also agreed to send secretary general Nabil Elaraby to Syria to push for political and economic reforms in the country ruled by Al-Assad’s family for 41 years.

Their move came after Syria’s closest ally Iran also said Damascus must listen to the “legitimate demands” of its people, adding, however, that any change in Syria’s ruling system or a power vacuum in Damascus would be dangerous for the region.

The United Nations says 2 200 people have been killed since Al-Assad sent in tanks and troops to crush the demonstrations that erupted in March after the presidents of Tunisia and Egypt were toppled by popular protests.

But despite growing international condemnation, the threat of more Western sanctions, and escalating economic pressures because of the impact on tourism and investment, Al-Assad’s rule shows no sign of imminent collapse.

The Arab League council stressed “the importance of ending bloodshed and to resort to reason before it is too late”.

Syria warned residents of the capital on Saturday not to demonstrate, “for their safety”.

“The Interior Ministry calls on citizens not to respond to social internet sites to participate in rallies or assemble in public squares in Damascus. This is for their safety,” a statement by the ministry published on official media said.

Syrian forces fired live ammunition to prevent thousands of protesters from marching on the centre of Damascus from eastern suburbs on Saturday, witnesses and activists said, seriously injuring at least five people.

Security police and militiamen loyal to Al-Assad, known as “shabbiha”, also fired live ammunition at worshippers who tried to demonstrate outside the al-Rifai mosque in the Kfar Sousa district, home to the secret police headquarters.

Al-Assad loyalists beat the mosque’s preacher, Osama al-Rifai, who was treated with stitches to his head, witnesses said.

The Syrian Observatory for Human Rights, citing witnesses, said more demonstrations had broken out in Damascus overnight on Friday and Saturday than at any time since the pro-democracy uprising began.

At least three protesters were killed elsewhere in Syria on Saturday as tens of thousands of people marched to demand the removal of Al-Assad on a major religious occasion, activists and residents said.

Dangerous developments
Syria has expelled most independent journalists, making it difficult to verify events on the ground. Authorities have blamed armed “terrorist groups” for the bloodshed and say 500 police and army have been killed.

After the first official Arab League meeting on Syria since the start of the uprising, the ministers said in a statement: “The council expresses concern and worry over the dangerous developments on the Syrian arena that had caused thousands of casualties, including dead and wounded.”

Many Arab commentators have criticised the league for its timid reaction to the violence, after for months only voicing “concern”, suggesting divisions among its members, some of whom are facing popular protests at home.

Any power shakeup in Syria would have major regional repercussions

Ally Iran said Al-Assad must respond to the “legitimate demands of the people”, but unlike other regional powers it did not criticise the use of force to crush protests. It said there should be no change to the ruling system.

“If there is a change or a vacuum in Syria’s system of governance, it will have unforeseen consequences,” Foreign Minister Ali Akbar Salehi said. “… The outbreak of change in Syria will not have good consequences for anyone in the region and can subject the region to serious crisis.”

Al-Assad, from Syria’s minority Alawite sect, has strengthened an alliance with Iran’s Shi’ite clerical rulers, to the disquiet of Syria’s Sunni majority. He also backs Lebanese and Palestinian militant groups.

The United States has accused Tehran of providing support to Al-Assad’s forces crushing the protests.

The United States and EU have urged Al-Assad to step down but their push at the United Nations to impose Security Council sanctions on Syria over its crackdown has met resistance from Russia and China, diplomats said.

Russia has a naval base in Syria and is one of its main arms suppliers. One proposed sanction is an arms embargo while other sanctions would freeze the assets of Al-Assad and his associates. – Reuters