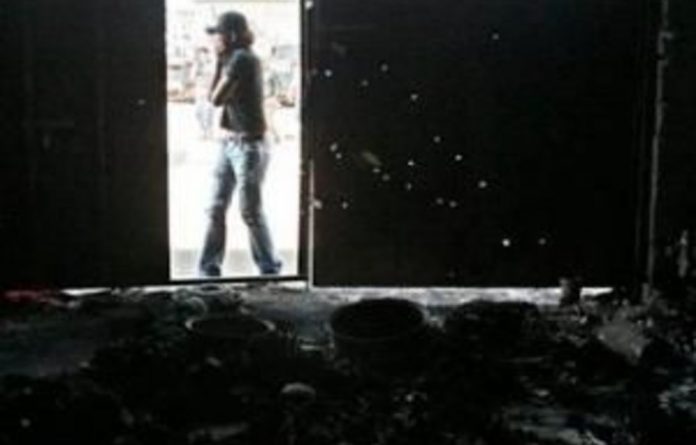 Libyan forces closed in on Muammar Gaddafi’s home town on Sunday, vowing to seize it by force if negotiations failed and their leaders ruled out any talks with the deposed ruler, other than on the terms of his surrender.

Gaddafi’s foes advanced on his birth place of Sirte, which straddles the east-west coastal road, but one commander said “liberating” the city could take over 10 days.

Tripoli’s streets were quiet after sporadic overnight gunfire and explosions in the capital, traumatised by emerging evidence of widespread summary killings that took place during last week’s battles to drive Gaddafi out.

Some residents ventured out to hunt for scarce supplies of water, food and fuel. In Martyrs Square, known as Green Square in the Gaddafi era, traffic police reappeared in crisp white uniforms, directing cars amid a sea of bullet casings.

“I came back to work on Friday. Life is beginning to come back to normal,” said one police officer, Mahmoud al-Majbary (49).

Asked if fighters were obeying the traffic police, he said, “Not yet, we’re getting there slowly. We’re mainly really here to reassure the people that they are safe.”

No negotiations
Libyans may remain fearful as long as the man who subjected them to his capricious will for 42 years remains at large.

Gaddafi (69) has so far evaded capture, perhaps intending to lead an insurgency against his disparate opponents grouped loosely under the National Transitional Council (NTC).

“No negotiation is taking place with Gaddafi,” Ali Tarhouni, the NTC official for oil and finance, told Reuters. “If he wants to surrender, then we will negotiate and we will capture him”.

The Associated Press earlier quoted Gaddafi’s spokesperson, Moussa Ibrahim, as saying Gaddafi was still in Libya and wanted to discuss forming a transitional government with the NTC.

NTC officials say the war will go on until Gaddafi is killed or captured and insist that he, his son Saif al-Islam and his spy chief should be tried in Libya, although they are wanted by the International Criminal Court (ICC) for crimes against humanity.

Vital prize
Sirte, 450km east of Tripoli, is a vital prize for anti-Gaddafi forces attacking from east and west. They say they prefer a negotiated handover but will fight if need be.

“Our aim isn’t bloodshed, our aim is liberation,” Colonel Salem Muftah al-Refaidy told Reuters during a visit to the eastern city of Benghazi. “We don’t want more bloodshed, especially among the civilians — children, elderly and women.”

He said NTC troops were within 100km of Sirte from the east and were also approaching from Misrata to the west.

Refaidy said there was no going back to the past. “After all this bloodshed we can’t say, ‘Come here Muammar, come here Saif — we’re sorry, take Libya’. It’s done. Game over.”

Stocking up
In Tripoli, residents queued for bread or scoured grocery shops for food. Many took a stoical view of their plight.

“This is a tax we pay for our freedom. We must endure in this transitional period,” said Sanusi Idhan, a lawyer waiting to buy food.

Abdel Salam al-Arabi (56), a bank worker, said things would improve. “I don’t think there’s a crisis but we are having problems with petrol and there are some water shortages. Libya will come back. We have experts, we can do it,” he said.

Aymen Mohammed was filling plastic containers with water to supply his neighbours. “There are many people here who don’t have water so we’re filling the bottles from our well,” he said.

The stench of rotting bodies and burning garbage still hangs over the city. More and more bodies have turned up, some of slain Gaddafi soldiers, others victims of summary killings.

The charred remains of 53 people were found in a warehouse in Tripoli, apparently imprisoned opponents of Gaddafi who were executed as his rule collapsed, Britain’s Sky News reported on Saturday. It broadcast pictures of a heap of burned skeletons, still smouldering, in the warehouse.

In the Tajoura district of the capital, local people prepared a mass grave for the bodies of 22 African men who appeared to have been recruited to fight for Gaddafi. One of the dead had his hands tied behind his back.

“The rebels asked them to surrender but they refused,” said resident Haitham Mohammed Khat’ei.

“The evidence we have been able to gather so far strongly suggests that Gaddafi government forces went on a spate of arbitrary killing as Tripoli was falling,” Sarah Leah Whitson, HRW’s North Africa director, said in a statement.

In a sign of the lawlessness now gripping parts of the capital, one of Gaddafi’s villas lay looted and abandoned, torn pictures of the fugitive leader scattered in its grounds.

The NTC, which has told its fighters not to carry out revenge killings, is trying to assert its authority and restore order in Tripoli but its top officials have yet to move there from their Benghazi headquarters in the east.

The NTC and the Western powers that backed rebel forces with a five-month bombing campaign are acutely aware of the need to prevent Libya collapsing into the kind of chaos that plagued Iraq for years after the US-led invasion of 2003.

British Foreign Secretary William Hague rejected any idea that Gaddafi could be involved in a transition of power, saying this was unacceptable to the NTC and its foreign allies.

“That regime is finished,” he told Sky News. “So that just is not on the cards, we are way past that point.”

Assasinations
The Hague said Britain favoured putting Gaddafi on trial at the ICC but added that his fate was for Libyans to decide.

He urged the former Libyan leader to “tell his remaining forces to lay down their arms, to cease this violence so that other people can take forward Libya into a peaceful future.”

HRW said it interviewed three survivors of alleged executions by pro-Gaddafi forces, including a man who said he had been shot three times as mercenaries fired into a room of 25 prisoners after receiving orders to “just finish them off.”

The sounds of advancing rebels had been heard just before the prisoners were shot, the witness told HRW.

“These incidents, which may represent only a fraction of the total, raise grave questions about the conduct of Gaddafi forces in the past few days, and whether it was systematic or planned,” said Whitson. “If these incidents are proven to be extra-judicial killings, they are serious war crimes and those responsible should be brought to justice.”