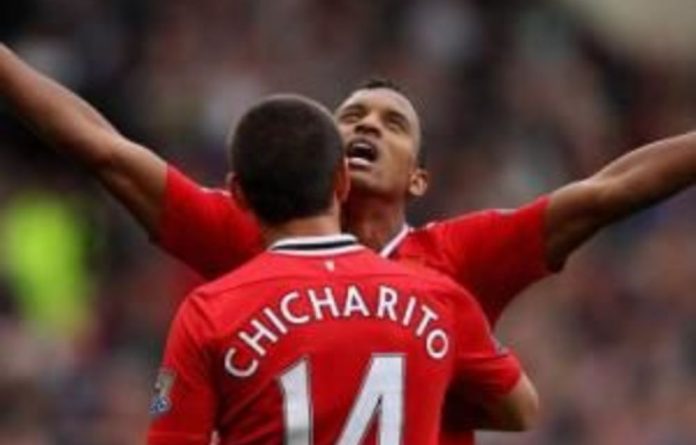 Manchester United swept to a magnificent 8-2 victory over 10-man Arsenal as the champions produced the perfect response after Manchester City had underlined their title credentials with a 5-1 rout of Tottenham earlier on Sunday.

City had thrown down the gauntlet to United as Edin Dzeko scored four times to destroy Tottenham at White Hart Lane, but Sir Alex Ferguson’s team emphasised their determination to hold onto the Premier League crown with a Wayne Rooney hat-trick reducing beleaguered Arsenal to rubble in a sublime display at Old Trafford.

Ferguson once again fielded a youthful line-up and his gifted prodigies rose to the occasion in impressive style to record their third successive win of the season and move ahead of second placed City on goal difference at the top of the table.

Danny Welbeck opened the scoring with a close-range header in the 22nd minute after Johan Djourou failed to clear Anderson’s chipped pass and Arsenal squandered a chance to level when Robin van Persie’s penalty, awarded for a Jonny Evans foul on Theo Walcott, was saved by David De Gea.

Within a minute, Ashley Young had made Arsenal pay with a brilliant curling goal from the edge of the area and Rooney increased the lead when he whipped a 41st minute free kick past Wojciech Szczesny for his 150th United goal.

Walcott’s low drive escaped De Gea’s weak attempted save to reduce the deficit on the stroke of half-time but United scored a fourth through another tremendous Rooney free-kick in the 62nd minute.

Van Persie scored from close-range in the 74th minute but Gunners defender Carl Jenkinson was sent off for two bookings moments later.

United hadn’t finished yet and Rooney completed his treble with an 82nd minute penalty before Young headed home in stoppage time.

Stark contrast
In north London, City gave a free-flowing performance that was a stark contrast to their more dour approach last season to secure a third successive victory.

Dzeko struck twice in seven minutes before half-time as he converted a cross from debutant Samir Nasri and then looped a header over Brad Friedel after another Nasri delivery unhinged the Spurs defence.

The Bosnian striker completed his treble in the 55th minute when he slammed Yaya Toure’s cross past Friedel.

Younes Kaboul headed home for Spurs in the 68th minute, but the hosts — who started with unsettled Chelsea target Luka Modric — conceded a fifth when Dzeko curled into the top corner in stoppage time and Harry Redknapp’s side sit bottom of the table after losing their opening two league games.

“We played a really good game against what is a fantastic team,” Mancini said. “I was always sure Dzeko would score a lot of goals for us, he always scored in Wolfsburg.

“This is a very long season and it’s important that we started well. The next games will be very hard because now everyone thinks we will score three or four goals, but that is impossible.”

Dramatic victory
Elsewhere on Sunday, Newcastle striker Leon Best bagged a clinical double to fire his side to a 2-1 victory over Fulham at St James’ Park.

Clint Dempsey got one back for Fulham late on but, three games into Martin Jol’s reign, the west London outfit have only one point.

Stoke’s Ryan Shotton scored in the closing moments as the FA Cup finalists snatched a dramatic 1-0 victory against West Brom at the Hawthorns on Sunday.

Shotton netted in the 89th minute after a mix-up between goalkeeper Ben Foster and centre-back Gabriel Tamas to condemn Albion to their third successive Premier League defeat and give Tony Pulis’s undefeated side their first league win of the season. — AFP