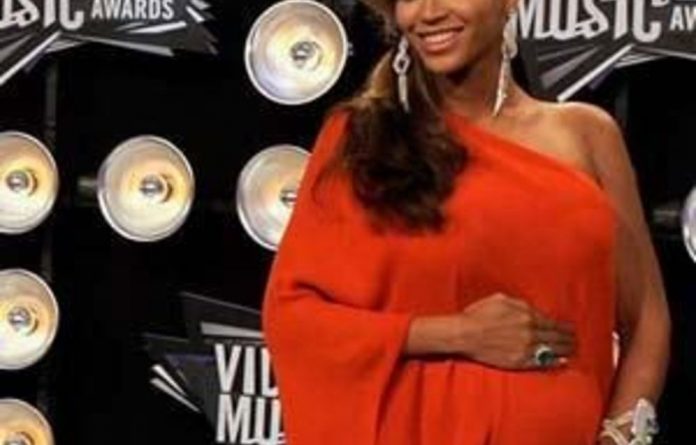 Pop star Lady Gaga picked up two awards and Katy Perry won three, including video of the year. But it was Beyonce showing off her new baby bump that stole the show at MTV’s Video Music Awards on Sunday.

The MTV VMAs annually turn up the volume on surprises and outrageous acts by the world’s top singers and bands. Last year it was Lady Gaga’s meat dress and the year before the Kanye West and Taylor Swift speech mishap. But nobody saw Beyonce’s pregnancy coming — except her husband Jay-Z.

Beyonce, whose hits include Single Ladies (Put a Ring on It), first appeared on the red carpet, posed for photographers and used her arms to outline the baby bump her long gown.

She later performed her song Love On Top, telling the audience to stand up and saying, “I want you to feel the love that’s growing inside of me.” At the end, she took off her jacket, smiled broadly and rubbed her tummy.

In the audience, Jay-Z was congratulated by Kanye West and he gave Beyonce a big wave. On Twitter, one ardent fan had already started an account, http://twitter.com/#/BeyJayFetus, and it had more than 900 followers.

Lady Gaga opened the VMAs singing her song You and I and dressed in drag as her male alter ego, Joe Calderone. She stayed in the fictional character throughout the program and accepted awards for best female video and best message video for her song, Born This Way.

“I feel so blessed to be here,” Lady Gaga said onstage, holding the MTV moonman statuette for best female performer. “It doesn’t matter how you are — gay, straight, bi, lesbian, transgendered — you were born this way.”

Katy Perry’s cube hat
The other big winner of the night was Katy Perry. who took home video of the year, the night’s top prize, with her triumphant song and video for Firework.

She also picked up best collaboration for E.T. featuring Kanye West, and a minor trophy for special effects with E.T.

Perry, who is known for cute and colourful costumes accepted her award with a cube-shaped hat on her head.

“I’m very proud of the song, she said. “I feel like I am doing something right when I sing [it].”

Other awards went to Justin Bieber for best male video with U Smile, and Tyler, The Creator took home the MTV moonman for best new artist with Yonkers.

Britney Spears earned the honour of having the best pop video with Till the World Ends. She was also given the special honour of the Michael Jackson video vanguard award.

Foo Fighters nabbed best rock video and Nicki Minaj, in a bright dress she said was inspired by Tokyo and its Harajuku district, took best hip-hop video for Super Bass.

Shut out of the top awards was British singer Adele, who has been topping charts for weeks with her hit album 21 and its singles including Rolling in the Deep. But the song did manage to earn awards in minor categories of art direction, cinematography, and editing.

Highlights included a duet by Jay-Z and Kanye West, singing a song from their new album, Watch the Throne, and Lil Wayne closed the program in advance of his new album’s release.