Malema riots: Not in our name, say ANC 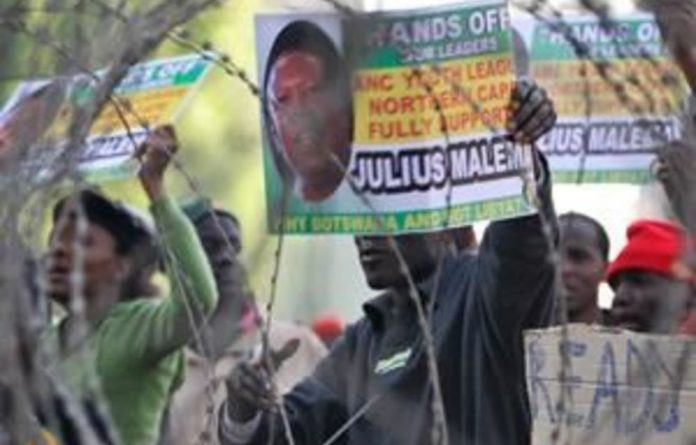 The violence that erupted in the Johannesburg CBD ahead of ANC Youth League president Julius Malema’s disciplinary hearing on Tuesday was “totally unacceptable” and tarnished the name of the ANC, party spokesperson Jackson Mthembu said.

“We totally condemn such violence. It is totally unacceptable,” Mthembu said, as groups of people gathered to support the league’s leadership were filmed throwing stones and bottles at reporters and photographers in the city centre.

ANC secretary general Gwede Mantashe told reporters outside Luthuli House that “those responsible for bringing these individuals [protesters] will be held responsible for their actions”.

“The last time we had people marching on the ANC headquarters like this was the IFP [Inkatha Freedom Party].

He said Malema’s disciplinary hearing was going ahead, but would not confirm if the youth league leader was in the building.

“It flies in the face of what the leadership has called for — disciplined behaviour,” said Mthembu as groups tried to push towards ANC headquarters Luthuli House.

“It is not disciplined, and criminal,” he said.

“We have seen journalists being pelted. We have also seen even our police being pelted with stones, and all types of things.”

ANCYL to blame
“We are therefore saying this is unacceptable and we put the blame squarely on the shoulders of the ANCYL.”

“We are very concerned.”

The ANC appreciated the role the police were playing and called on them not to become violent in the face of provocation.

“They must ensure the safety and security of everyone within the city.”

Gauteng police spokesperson Colonel Lungelo Dlamini said that even though the groups were throwing objects and burning posters, they felt they had the situation contained.

“We have got enough members on the ground to contain the situation,” he said.

Earlier police used water cannon to control the crowd and three helicopters were seen hovering over the region of Beyers Naude Square and Luthuli House, which is situated on the corner of Sauer Street.

By mid-morning he said no arrests had been made, and no injuries reported.

“The insults that are being thrown, the burning of posters, faces of our leadership that are on some posters, generally the unruly behaviour, cars being damaged … that is totally un-ANC, you will not expect members of the ANC to do that. We cannot be quiet. They are tarnishing the image of the ANC.”

This was after Malema said the league would send a team to Botswana to consolidate local opposition parties and help bring about regime change, as it believed the government there was “in full cooperation with imperialists” and undermining the “African agenda”. – Nickolaus Bauer and Sapa