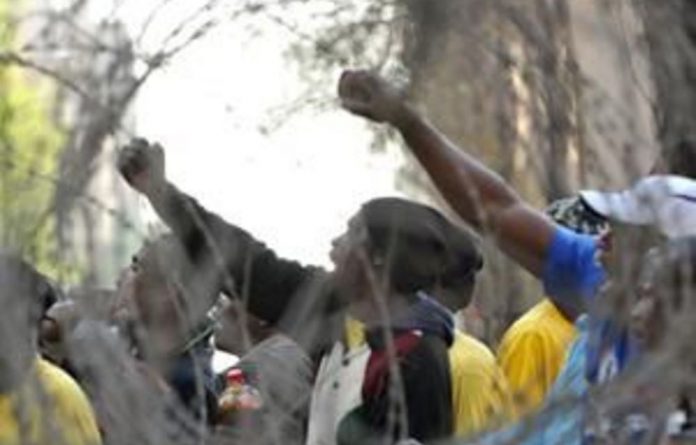 Hundreds of Julius Malema supporters gathered in the streets of Johannesburg on August 30 as Juju faced the first day of his disciplinary hearing. Journalists and police were pelted with rocks and other debris, and T-shirts bearing Jacob Zuma’s face were burnt.

“It is completely unacceptable that journalists were targeted for attack,” said Sanef chairperson Mondli Makhanya.

“Sanef notes that Malema told his supporters that journalists should not be attacked as they were merely ‘the messengers’.

“We urge that they heed his call and that the youth league inform its members of the need for journalists to be allowed to carry out their professional duties without interference.”

At least five journalists were hit by rocks and a policeman had to be hospitalised when youth league members, including some schoolchildren, ran riot in downtown Johannesburg in support of Malema, who appeared at a disciplinary hearing.

Reporters were also groped by youths, said Sapa journalists on the scene.

The charges arise from Malema’s recent comment that the league would send a team to Botswana to consolidate local opposition parties and help bring about regime change, as it believed the government was “in full cooperation with imperialists” and was undermining the “African agenda”.

Makhanya said journalists were acting in the interest of the general public, and it was in the public interest that they be allowed to do so.

It was also the duty of the youth league to ensure it conducted itself peacefully and within the law, he said.

“It shows total disrespect for the role of the media and we condemn this disrespect and the violence in the strongest terms.

“What we have seen today does not bode well for the future of media freedom and all South Africans need to stand up against it,” he said. While eNews was broadcasting live footage of protesters turning on the media on Beyers Naude Square, reporter Cathy Mohlahlana had to take cover.

According to Patrick Conroy, group head of eNews, some of the broadcaster’s cabling were stolen.

“My understanding is that a lot of our cabling, visual equipment, was disconnected and stolen.”

He said it was a sad day when reporters were was not allowed to do their jobs.

A window of an eNews van was also broken.

Speaking as group head of news at Primedia, Abramjee said Eyewitness News reporter Andrea van Wyk was repeatedly called a bitch, sworn at and groped while she was covering the event.

“Our journalists narrowly escaped injury. One reporter’s microphone wire was pulled away.”

On Tuesday afternoon, Malema told the crowd at Beyers Naude Square: “You cannot throw stones at journalists because journalists are just messengers … if you attack journalists, you will lose public sympathy.”

He also asked them not to attack the police.

“The police is not your enemy. These are the people employed to protect you,” said Malema.

The Cape Town Press Club said it was deeply disturbed at reports of journalists being attacked.

“We condemn these attacks, and call on the crowds in question to respect the democratic right of journalists to carry out their duties, without hindrance.”

One person had been arrested for turning over a rubbish bin, said Johannesburg metro police spokesperson Chief Superintendent Wayne Minnaar.

The hearing would be moved only if there was a repeat of Tuesday’s violent clashes. Clayson Monyela, the deputy director-general for public diplomacy in the Department of International Relations and Cooperation, confirmed this on Twitter on Wednesday morning.

“We won’t be announcing the venue, but we’ll take this outside the CBD. We believe the people of Johannesburg have the right to use their city,” Mantashe told reporters at a special briefing at Luthuli House on Tuesday evening.

Meanwile, roads around the ANC’s headquarters were open on Wednesday morning.

“Our members are still there in town.”

Roads would be closed again, “if there are some problems”, said Dlamini. – Sapa and Staff reporters