Libya rebels get taste of luxury at Gaddafi family resort 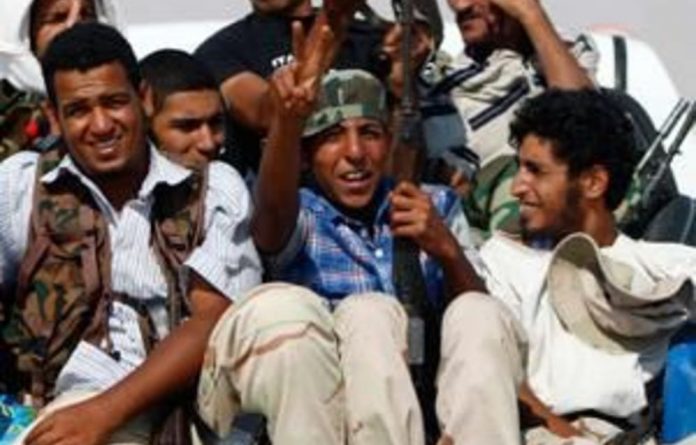 The gold-plated cutlery and crystal champagne glasses, the Versace and Armani suits and rows of unworn designer shoes, are all that remain at the luxurious seaside compounds of the children of Muammar Gaddafi.

The fancy beach villas are testimony to the fact that the Gaddafis not only ruled Libya, they owned it, and treated its oil wealth as their personal patrimony.

Yet the cars now parked outside these gilded villas are no longer fleets of limousines, but the motley collection of jeeps and machine-gun mounted pick-up trucks belonging to the rag-tag army of civilians who rose up and overthrew the Gaddafis.

And it is those fighters who now sleep inside the Italian-designed bedrooms with their Pierre Cardin carpets and Burberry couches, resting at the end of the Muslim month of Ramadan.

“The day that we have been dreaming of all our lifetime has come. This beach was reserved for Gaddafi sons, their families, friends and the ruling elite,” said Kabet, a legal adviser at the economic council of Libya before joining the revolution in February.

“They are the ones who enjoyed the wealth of Libya not us. The Libyans got nothing out of it,” he said.

“Libyans could never swim here or get near these gates. The fate of anybody who dares get close to these walls was known, he will be shot dead,” Kabet said.

For nearly all of them the Eid al-Fitr at the end of the month of fasting will be their first without Gaddafi, whose 42 years in power have conditioned their lives.

This gated community, known as Regatta, is one of two sun-coloured mini-cities built along the sandy Mediterranean beaches west of Tripoli — protected and private resorts designed to their own voracious specifications.

There are supermarkets and diving centres, tennis courts and soccer pitches, restaurants and clinics. Some have their own gyms and swimming pools. Motor boats are moored nearby.

“This is only one drop of their wealth and the many houses they have here and abroad and the billions they have,” said Abdel-Salam Kilani, an officer who defected from Gaddafi’s troops in February.

‘The millions they have are worthless’
At the villa of Saadi Gaddafi, suits, cashmere coats, ties and shoes from almost every famous designer in the world, were tossed on the floor. Suitcases were flung open, suggestive of a hurried exit.

Added to the mix were recordings of Pink Floyd, popular Lebanese singer George Wassouf and the West Wing television series along with printed pages of al-Jazeera news bulletins on the flight of Tunisian President Zine al-Abidine Ben Ali.

The Gaddafis seemed passionate about luxury goods, but less keen on books.

The one book in the villa owned by Mohammed Gaddafi, who fled to Algeria was Body and Soul Escapes, a book on meditation. His house was adorned with photos of sport clubs, flags as well as sporting memorabilia and photos of his family.

Flight schedules to neighbouring Arab countries left behind seemed to be one of their recent preoccupations.

The new tenants appeared comfortable in Aisha’s 13-bedroom elegantly-furnished house, each of the fighters occupying a bedroom of his own. The rebels had packed her photo albums in a box except for a torn one of her with her father in her youth.

It is clear the occupants of this serene compound with its beaches, palms, pines and bright bougainvillea had left in a hurry, or perhaps in the middle of a party.

Some houses still had wine and champagne glasses on the terraces. Children’s bicycles and toys were left abandoned in the narrow streets.

The gated community of Regatta, about 12km west of Tripoli, is only one of the many Gaddafis’ homes. Only close friends, extended family and ruling associates shared their world.

Across the compound, concealed behind walls, Libyans live in poor and shabby houses, earning low or modest salaries that allow them to just about get by.

Forty-seven-year-old Najib Kabet, a rebel, added: “Look! where do you think the wealth of Libya has gone?.”The Gaddafi family owned Libya.”

Though these sumptuous villas reveal the Gaddafis’ abuse of Libya’s riches and highlight the country’s social inequalities, not many Libyans knew they existed until the rebels found them.

Most of the fighters at the compound came from the poor Western mountains but did not seem to be envious of the luxury. Most appeared even unimpressed with the opulence around them.

“This [lifestyle] does not mean anything to us”, said Ibrahim Madani, a 26-year-old fighter from Zintan.

“Let them know that the millions they have are worthless. People paid with their blood for the sake of freedom.”

“The most important thing is that the people got rid of them. Let the new generation enjoy a better education, a better country and life.”

“They sucked the blood of this country,” Madani said. – Reuters