Semenya through to 800m semifinal 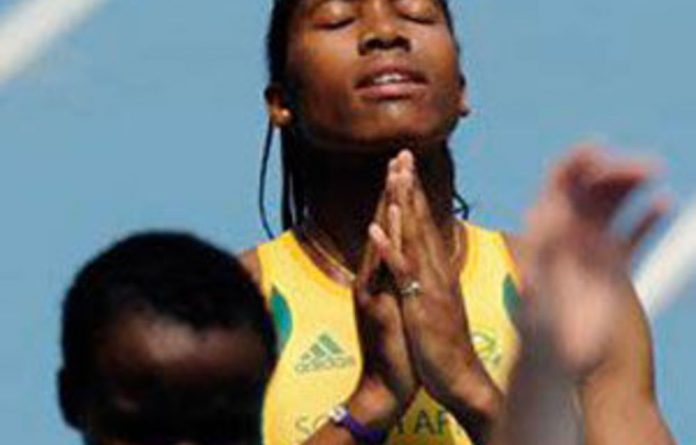 Two years after her gender overshadowed her world title, South African runner Caster Semenya got off to a strong start in defending her 800-metre title on Thursday.

The 20-year-old Semenya easily qualified for the semifinals at Daegu Stadium, finishing second in her heat in 2 minutes, 1.01 seconds.

After crossing the finish line, however, she reached down and grabbed her right knee.

“It’s fine,” Semenya said. “I’ll just go back and get ready for the next round.”

Semenya has been struggling for much of the year and was drawn in a heat alongside Mariya Savinova of Russia, who has the season’s top time. Still, the South African led through much of the finishing straight and eased up at the end, allowing Savinova to cross first as both clocked the same time.

In Daegu, Semenya is looking to show her victory as a relatively unknown teenager in 2009 was no fluke.

She was forced out of competition for 11 months by the IAAF following gender tests, threatened to take the governing body to court, was cleared to run by the IAAF without explanation and then missed the 2010 Commonwealth Games with a back injury.

“I’m not under pressure,” Semenya said. “I want to go back and focus on the semifinals.”

Semenya has not come close to the blistering pace of 2009 since her return from the enforced layoff. The Pretoria-based athlete only twice ran under two minutes in her buildup and her season’s best 1:58.61 was still way off the 1:55.45 that won her gold two years ago in Berlin. That form is unlikely to be good enough to retain her title.

In Thursday’s heat, Semenya moved up to fourth place after the first lap. She briefly took the lead over the last 50 metres before easing up before the finish line.

Savinova, who looks to be Semenya’s main rival, has looked strong this season. She won the European Team Championships in June in 1:58.75.

Before the worlds, the media-shy Semenya denied reports of problems in a statement.

“The recent media reports that Caster Semenya is not ready to defend her world 800-metere title are untrue. Semenya remains disciplined, focus and excited about representing South Africa at the IAAF World
Championships in South Korea,” the statement said, promising Semenya would put up “a strong fight in defense of her title”.

In Berlin two years ago, Semenya dominated the women’s 800. But her dramatic improvement in times and muscular build led the IAAF to order gender tests.

Amid acrimony between the IAAF and Semenya and South African officials, the case dragged on for 11 months before the IAAF cleared Semenya to run again in July 2010. The IAAF has refused to confirm or deny Australian media reports that the tests indicated Semenya had both male and female sex organs.

The semifinals of the women’s 800 will be held Friday with the final set for Sunday, the last day of competition. — Sapa-AP