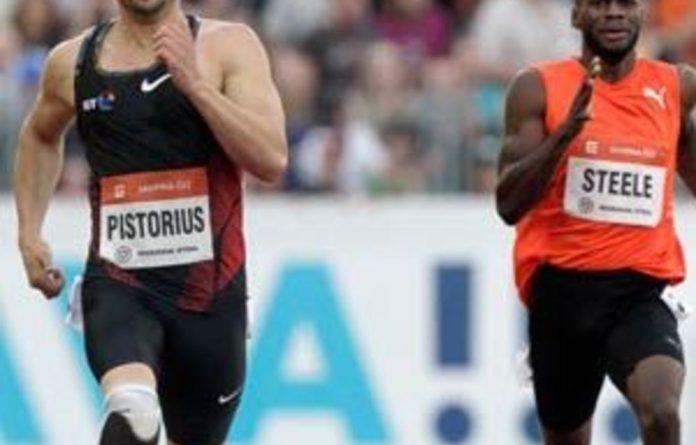 More than winning a silver medal at the World Championships, double-amputee runner Oscar Pistorius said on Friday he wished he could have earned it by running in the 4 x 400m relay final.

One day after helping South Africa qualify for the final at the competition, Pistorius was left out of Friday’s race and could only watch his teammates finish behind the United States in a thrilling finale.

“Was really hard watching knowing I deserved to be part of it,” Pistorius said in a Twitter message after Friday’s race.

Instead of Pistorius, the South African team decided to go with LJ van Zyl, who won bronze in the 400m hurdles late on Thursday. Because Pistorius ran the heats, he got the medal nevertheless.

“It was difficult and everyone felt guilty,” Van Zyl said.

Making history
After making a historic breakthrough for Paralympic athletes by reaching the semifinals of the 400m early this week, the Blade Runner ran a strong leadoff leg on in the heats to help his team to a third-place finish and a South African record.

Still, Pistorius had to make way for Van Zyl.

“We decided before the heats that the slowest runner on the team in the prelims would not run the final,” Van Zyl said. “Unfortunately, Oscar’s leg was the slowest.”

And after scoring South Africa’s best result in the event, it was tough to argue against the decision. In the huddle celebrating a famous silver, there were no carbon-fibre blades to be seen.

“It was all down to the management,” said Shane Victor, who took Pistorius’ place as leadoff runner.

Pistorius’ manager, Peet van Zyl, still thought his runner should have been included.

“It was a big surprise to us. It is a disappointment, needless to say, for Oscar,” Peet van Zyl said. “It was the team management that made the call for reasons we don’t know.”

Against the best
It was already considered an amazing performance for Pistorius, who had his legs amputated when he was a baby, to get into the 400m semifinals on his carbon-fibre blades, but Thursday’s relay performance did one better.

The International Association of Athletics Federations had said that Pistorius could only run the leadoff leg of the relay because it is completed with teams still running in lanes. There were fears that his blades could be a danger if he had to run in a bunch.

Van Zyl ran the anchor leg in the final. The anchor from the heats, Shane Victor, became the leadoff runner.

Still it was another giant stride forward in the career of the 24-year-old runner who always refused to believe that the lack of shins, ankles and toes made him less of an athlete than able-bodied competitors he regularly beat.

Since childhood, he was good at whatever he did, became a Paralympic star and won three gold medals at the Beijing Paralympics to prove it.

Yet he always wanted to compete against the best. Now, he has a world championship silver to prove it. — Sapa-AP

Those who find their lives threatened in violent, abusive relationships have little recourse to justice
Read more
Advertising
Continue to the category
National