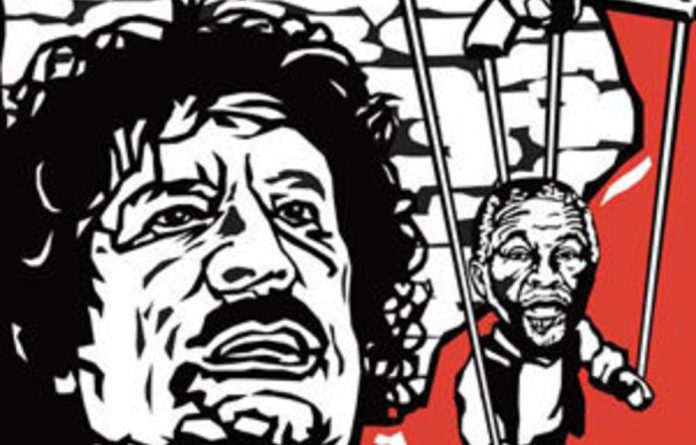 The European Union diplomat was puzzled. “I can understand,” he said, “why South Africa would be against the Iraq war or why it would resist Western ‘interference’ in Zimbabwe, but why the outcry over Libya, a popular revolt against a despot, and why the comparative silence on Syria, especially since it is a minority regime acting brutally against its people?”

He is not the only one to ask these questions. Indeed, the South African government’s obstinacy about unfreezing $1.5-billion in Libyan cash to assist with reconstruction efforts has frustrated Western supporters, notably Washington. A solution to this impasse was eventually crafted by not including the name of Libya’s rebel National Transitional Council in the American draft resolution to the United Nation Security Council, though Pretoria’s bloody mindedness is unlikely to be quickly forgotten or forgiven.

Such external observers are, sadly, no longer bewildered by Pretoria’s double standards on human rights issues that, since the passing of the Mandela era, have become the norm in South Africa’s foreign relations. Examples are its decisions regarding Burma, Iran, Zimbabwe, Saddam Hussein’s Iraq and the government’s ambivalence over Afghanistan. Rather, they are angered by what is increasingly viewed by some as Pretoria’s destructive stance. The term “rogue democracy” is now on people’s lips.

Deputy President Kgalema Motlanthe’s call on the International Criminal Court to investigate possible war crimes by the Nato force in Libya can only add grist to this already gritty mill.

Motlanthe told Parliament: “We note they [Nato] are attempting to create the impression that the rebels are acting on their own in their attacks in Tripoli, but there are clear links and co-ordination at that level.” He asked whether the court would “have the wherewithal to unearth that information and bring those who are responsible to book, including the Nato commanders on the ground.”

The drivers behind South Africa’s policy regarding the “Arab Spring” are six-fold:
First, a visceral rejection of external involvement. This, of course, has its origins in colonialism. And, let’s face it, anger over external intervention has a racial dimension. There is little enthusiasm, at best, among Africans, or at least their leaders, for white guys acting against those of a darker hue. Little wonder ANC Youth League spokesperson Floyd Shivambu said Africa faced a real threat of recolonisation in the light of Libya, where, he said, “imperialist forces” were acting out of greed.

Radical credentials
Second, over Libya in particular, there is little doubt that South Africa is trying to regain some of its radical credentials, lost in its support for UN Security Council Resolution 1973, which authorised Nato air operations to protect civilians.

Foreign policy, unlike economic policy, has until now, been a relatively cheap way to maintain Pretoria’s revolutionary credibility, principally for its domestic audience. This is illustrated by the outpourings by a group of South African “public intellectuals”, including former president Thabo Mbeki, who attached their names to the open letter condemning Nato actions.

In speaking for the billion or so inhabitants of the continent, the letter concludes that: “Those who have brought a deadly rain of bombs to Libya today should not delude themselves to believe that the apparent silence of the millions of Africans means that Africa approves of the campaign of death, destruction and domination which that rain represents. We are confident that tomorrow we will emerge victorious, regardless of the death-seeking power of the most powerful armies in the world.”

Powerful, if less than oracular, stuff. Lost on these intellectuals, however, is the irony of their argument against the UN’s use of the “still-unresolved issue in international law of ‘the right to protect’ — to justify the Chapter VII military intervention in Libya” rather than an overwhelming concern for African lives.

Lost, too, in defending the precepts of the African Union is the fact that Muammar Gaddafi came to power by military means 42 years ago. Or maybe the AU is not that worried about African lives. The debate about the relationship between HIV and Aids is only an intellectual jink away from such contorted foreign-policy logic, concerned as it is with theory and dogma rather than dealing with the facts on the ground.

The third motivation behind all South African policy on the Middle East, from Libya to Iran, is the Israel-Palestine issue, which many in the government apparently see as shorthand for apartheid. This, plus the usual dose of anti-Westernism, means that even the most egregious human rights violations are viewed through and measured against the wider goal of the Palestinian struggle.

Never mind that Syria has been a one-party state since 1963 or that Bashar al-Assad, like his father, has shown no restraint in dealing with legitimate protest. The best Pretoria could manage was to condemn the violence and call for democracy.

Before taking himself off on a “working visit” to assess the situation in Syria, our deputy foreign minister, Ebrahim Ebrahim, said: “We made it clear that the government should continue to work for an inclusive dialogue among the people of Syria. This dialogue should seek to meet the general aspirations of the Syrian people.” He also welcomed Assad’s announcement of a pending multiparty system, urging free access for the media. Presumably he also promises to hold his breath if this does not happen.

‘Brutal suppression’
The same minister spoke not a word about Tehran’s brutal suppression of post-election opposition in 2009. Instead, at the fourth joint deputy ministerial working group in September that year, he affirmed South Africa’s intention to strengthen bilateral relations.

A predilection to replicate the South African negotiated solution process is another driver. Not only does one solution not fit all, the components for success of this process have also become distorted and mythologised. South Africa’s success was dependent on external pressure equally on all parties to settle, which helped to ripen the internal conditions along with the prescient yet pragmatic leadership’s possession of a clear method and goals. Equal regional and international pressure and the presence of internal consensus are not present, however, in Libya, or, for that matter, in Zimbabwe.

The fifth driver is a misplaced notion that not only has there been a shift of global power eastward and towards other emerging countries, as represented by the Brics (Brazil, Russia, India, China and South Africa), but that China, principally, and Russia will now cover South Africa’s political back. This underestimates the weight of China’s own interests with others (not least the United States) relative to its relationship with South Africa.

The fact is that however much the global economy may be changing, the US and the European Union remain the top two powers — their joint gross domestic product is more than three times that of the Brics’ combined. Moreover, the US is the only global expeditionary military power.

The sixth and final driver is South Africa’s foreign policy price tag. Gaddafi, Africa’s self-anointed “king of kings”, is well known for spraying money around the continent and at its politicians. There are rumours of wine farms in the Western Cape and donations to political parties. Until there is legislation forcing such public disclosure we will never know and can only speculate. But perhaps there is a good reason for a lack of enthusiasm for such legislation.

Where many critics have a point with regard to Libya is over what comes next. Rebuilding the country is not going to be easy. Who knows what might follow the simply mad colonel? — anything from a secular democracy to an Islamic state. It could, indeed, end up a right mess.

Some South Africans might hope so, giving them ample ammunition for their Schadenfreude and a further bout of criticism. If only they would focus on more positive tasks — for example, how better to rebuild post-conflict countries, not least because this affects sub-Saharan Africa so profoundly, from Angola to Zimbabwe, from the Democratic Republic of the Congo to Côte d’Ivoire. Don’t expect any open letters on how to improve peace-building in Libya — or the Congo — where Western help is solicited in dollops.

The Libyan bottom line is this: Is it worse off for the removal of Gaddafi, charitably put, an unelected eccentric and less so, a self-enriching despot intent on keeping his family in power whatever it takes? The same question applies to the changes wrought by the Arab Spring in Tunisia and Egypt. Is this is what really frightens African elites?

Greg Mills is the director of the Brenthurst Foundation

The UN is currently going through a serious liquidity crisis because many countries have not paid their annual dues, and it is therefore unable to fulfil all its mandates
Read more
Politics

For a country that is guided by ubuntu, South Africa has a record of embarrassing international blunders
Read more
Politics