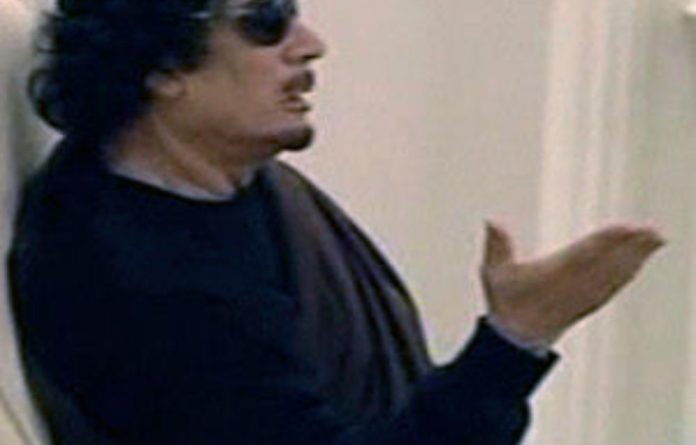 Libya’s new leadership reaffirmed its commitment to democracy on Friday and worked on its priorities for spending billions of dollars released from the frozen assets of fugitive strongman Muammar Gaddafi.

A day after international powers met in Paris and agreed to hand over more than $15-billion to the rebels who overthrew Gaddafi the European Union rescinded a range of sanctions and officials from the National Transitional Council explained their rebuilding plans.

Following a revolt in Libya’s capital on Saturday evening that saw civilians rise up against Muammar Gaddafi, Libyan rebels have stormed Tripoli — seizing control of the dictator’s last stronghold in a largely bloodless assault on the capital.

The NTC representative in London said that work on putting right the damage of 42 years of eccentric one-man rule and of six months of civil war should not wait until Gaddafi is found and the last bastions of armed support for him are defeated.

“As long as Tripoli, the capital, is stabilised and secure and safe, which it almost is now, and the overwhelming majority of other cities and towns, then Libyans can get on with the process of transition and stabilisation and the new political process,” Guma El-Gamaty told the BBC.

In the eastern city of Benghazi, seat of the uprising, an NTC official said the release of the funds meant the NTC now had to show Libyans it was capable of governing.

“Before we had the excuse that we didn’t have money when things went wrong,” he said. “Now we don’t have the excuse.”

Gamaty reaffirmed the council’s commitment to a “clear road map” to democracy, including a constitution to be drafted within eight months, a referendum and then full elections in 2013.

“By the end of about 20 months the Libyan people will have elected the leaders they want to lead their country,” he said.

As the rebels hunt Gaddafi, a spokesperson for his son Saif al-Islam said he has been travelling around close to Tripoli, meeting tribal leaders and preparing to retake the capital.

In a telephone call to Reuters in Tunisia from what he said was a “southern suburb of Tripoli”, Moussa Ibrahim derided the ability of the NTC to run the country and said their Western backers should negotiate with the ousted leader.

There was no way to verify his comments which, like those broadcast this week by Gaddafi himself, serve as a public reminder to Libyans he remains at large and may pose a threat, at least by means of a guerrilla war, to the new authorities.

Echoing comments made by Gaddafi and his son in recent broadcasts from hiding, Ibrahim said: “Our army still controls many regions of Libya. We will be able to capture Tripoli back and many other cities in the near future. The fight is very, very far from over. Within even a few weeks, a few months, even a couple of years, we will have Libya back.”

In Tripoli, life was returning to normal. Municipal street sweepers picked up litter and spent bullet casings on Martyrs Square, known under Gaddafi as Green Square.

NTC fighters had removed some roadblocks on a main road along the shoreline and more food stores were open, although water supplies and power remained erratic.

Several thousands of people, mainly women, later gathered in the square singing a new national anthem and carrying banners, which read “For the first time we are free”.

NTC education chief Soliman el-Sahli told Reuters that schools would reopen on September 17 , despite some bombed-out classrooms, scarce transport and a curriculum until this year based on Gaddafi’s personal Green Book — an eclectic account of the “Brother Leader’s” views of the world.

Starting over
One unknown in the process of installing an elected president and parliament is when the timetable will start running. The council road map says the process would begin once the NTC declares Libya “liberated” from Gaddafi. Its leaders have said the war will not end until he is found “dead or alive” so it is unclear when liberation might be achieved.

On Thursday, the 42nd anniversary of the military coup which brought him to power as a 27-year-old army captain, Gaddafi, who is now 69, declared his defiance in messages on satellite television.

NTC commanders say they think he is hiding in the tribal bastion of Bani Walid, some 150 km southeast of Tripoli. There are also suggestions he may be in his hometown of Sirte on the coast, or indeed elsewhere.

“Let it be a long battle. We will fight from place to place, from town to town, from valley to valley, from mountain to mountain,” Gaddafi said in one message.

NTC commanders say they are taking their time trying to cajole pro-Gaddafi holdouts like Bani Walid and Sirte into surrender in the interest of sparing further bloodshed.

A Libyan from Bani Walid said he had been in sporadic contact this week with people in the city.

“I know that two months ago most of the family, the younger children, were staying in Bani Walid,” said the source, who spoke on condition he was not identified.

Nato said it had carried out air strikes on Thursday in the vicinity of Sirte and Bani Walid.

In Libya’s third largest city,Misrata, rebels said they were reinforcing security to intercept Gaddafi supporters trying to infiltrate the area from their haven in Sirte.

Reconstruction plans
The NTC’s reconstruction minister, Ahmad Jehani, and Aref Nayed, a member of the council’s rebuilding team, met experts in post-conflict rebuilding from groups including the International Monetary Fund, World Bank and USAid in Paris on Friday.

The rebel officials said Libya is counting on quickly restoring oil production to revive its economy. Five foreign oil firms are already back and working to resume operations.

“The issue of damage is not much and you can get procurement very fast. This is helped by the fact the producing wells are under contract to international firms, if they feel they can deploy their people,” Jehani said.

Despite having access to some of the tens of billions of dollars Gaddafi had invested abroad, the new leaders will also need short-term aid and longer-term loans to help stave off a humanitarian crisis.

In order for Libya’s new leaders to obtain aid from bodies such as the World Bank, they will need to be recognised by the International Monetary Fund, which says such a move must be supported by its 187 members.

Though dozens of countries have followed the Western powers in recognising the NTC as Libya’s legitimate government, others have had qualms about the use of Nato force to oust Gaddafi.

Many African and developing countries are still uneasy with a process that reminds some of the US-led operations in Iraq and Afghanistan, even if Western leaders are at extreme pains to deny any plan to send in troops or run Libya for the Libyans.

Foreign Minister Antonio Patriota of Brazil, which has not recognised the NTC said this month’s UN General Assembly would settle the matter of recognition.

The European Union’s Official Journal listed 28 Libyan entities freed from EU sanctions as work gets under way to send in supplies and export oil through ports previously controlled by Gaddafi . EU foreign ministers meeting in Poland were to discuss how to help to stabilise Libya.

European powers ended a long standoff with Gaddafi in recent years as he scaled back hostility in return for the development of oil and gas exports. Polish Foreign Minister Radoslaw Sikorski said Europe saw the new Libya as a major energy supplier and ally. “Libya is potentially a wealthy country, key because of Europe’s drive to diversify energy sources.”

The huge numbers of weapons circulating in a postwar Libya with unsecured borders pose a risk to Europe and other nations, the EU’s senior representative in Tripoli said.