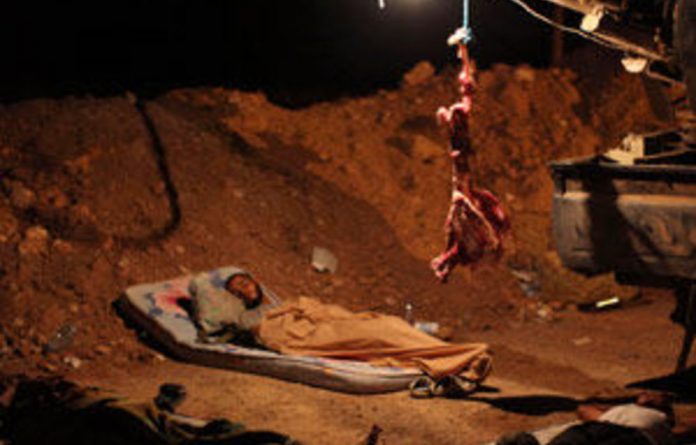 Forces of Libya’s interim ruling council are poised for an assault on the desert town of Bani Walid after negotiators failed to persuade Muammar Gaddafi loyalists to abandon one of their last remaining bastions.

The town is one of just a handful of areas in Libya still under the control of Gaddafi loyalists after a six-month rebellion ousted the leader from Tripoli last month.

Outside the town, a negotiator for the National Transitional Council forces now in control of the country said talks with tribal leaders were over.

“As chief negotiator, I have nothing to offer right now. From my side, negotiations are finished,” Abdallah Kanshil said at a checkpoint 60km outside Bani Walid.

“They said they don’t want to talk, they are threatening everyone who moves. They are putting snipers on high rise buildings and inside olive groves, they have a big fire force. We compromised a lot at the last minute,” he said.

It would be up to the NTC to decide what to do next, he added. “I urge Gaddafi people to leave the town alone.”

Tribal elders from Bani Walid had come out to negotiate after NTC spokespersons said several times over the previous day that talks were over and they were about to attack.

There has been speculation from NTC officials that members of Gaddafi’s family, perhaps even the former Libyan leader himself, may be hiding there.

Anti-Gaddafi forces have also closed in on the deposed leader’s birthplace in the coastal city of Sirte.

“There are ongoing negotiations regarding Sirte between the elders and various tribes and the free Libya forces surrounding Sirte,” NTC military spokesperson Ahmed Bani said in Benghazi. “The time is coming when talk is done with and we will enforce our will upon liberating the city of Sirte.”

To the east of Sirte fighters were dug in and also said they were ready to advance.

“We are awaiting the green light from the council,” said Naji al-Maghrabi, commander of a brigade. “If they tell us, ‘Move into Sirte now,’ we will.”

One fighter, Belqassem Souliman, said: “They have no way out but to surrender or die.”

Humanitarian concerns
Independent accounts from the three pro-Gaddafi bastions of Sirte, Bani Walid and Sabha, deep in the Sahara desert, have not been available as communications appear to be cut off.

The UN’s senior humanitarian official in Libya said he was worried about humanitarian problems in the few pockets of territory where Gaddafi loyalists are still in control.

“We are looking very closely at the situation in Sirte,” said Panos Moumtzis, UN humanitarian coordinator for Libya.

“We are preoccupied about the protection of civilians in this area. We understand that there is a dialogue taking place. We would really like to see a peaceful solution as fast as possible.”

Earlier on Sunday NTC negotiator Abdul Azil said Nato-backed NTC forces were just 10km from Bani Walid and inching forward, ready to attack what he said were an estimated 100 pro-Gaddafi fighters there.

“We are waiting for the order for our commanders to go into the city. We have told them we are coming. Everyone should stay at home. Hopefully it will be done without bloodshed,” he said, as Nato warplanes roared overhead.

In Tripoli, life has started returning to normal after last month’s fighting and a Muslim holiday last week. Traffic has become heavy as fuel supplies improved. Cafés are busy and offices have begun opening.

NTC officials have announced plans to bring their heavily-armed fighters under control and try to integrate thousands of them into the police force and find jobs for others.

Officials said there would also be retraining and reintegration schemes for those who fought for Gaddafi.

The disintegration of Gaddafi’s rule after a six-month war has left a security vacuum in Libya, with no state security forces. There are also large numbers former rebel fighters who are not part of any formal structure, and huge quantities of unsecured weapons.

After chasing out Gaddafi from his Tripoli compound last month, Libya’s new rulers are trying to control the entire country and restore normality.

But in an early sign of divisions, Ismail al-Salabi, a Libyan Islamist military commander who fought Gaddafi’s forces called on the interim cabinet to resign because they were “remnants of the old regime”.

A spokesperson for Gaddafi, who has been in hiding since his foes seized Tripoli on August 23, has dismissed talk of surrender and said powerful tribal leaders were still loyal to him.

“He’s in the country,” Moussa Ibrahim told Reuters on Friday in a call from an undisclosed location. “He’s in a safe place surrounded by many people who are prepared to protect him. – Reuters