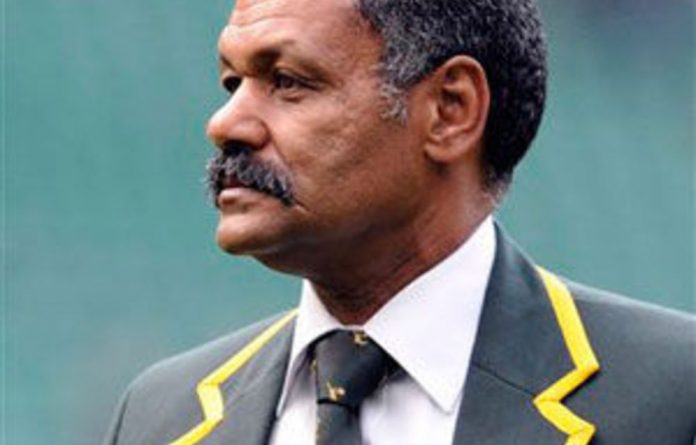 Winger Bryan Habana smiles when asked about the pressure of expectation on defending champions South Africa ahead of the Rugby World Cup in New Zealand.

New Zealand’s All Blacks enter the September 9 to October 23 tournament as favourites to win on home soil, having not won the World Cup since the first in 1987, but they are not the only team under huge pressure to perform, Habana reminded reporters.

Tens of thousands of people gathered in Johannesburg to wish the the Springboks well, President Jacob Zuma ordered them to bring back the Webb Ellis Cup, while they’re coming off a poor Tri-Nations campaign in which they finished last for a second year in a row.

When the tournament kicks off, they are drawn to play Wales, Samoa, Fiji and Namibia in Pool D, which many pundits rate the toughest of the four preliminary groupings.

“Bar the physical side, the mental preparation for a World Cup, of getting yourself ready, having a send-off in South Africa where 65 000 people say goodbye, where you visit the president and … he tells you to bring the Cup back … it’s fairly tough,” Habana told reporters in Wellington on Monday.

“That expectation as South Africans, we’re a very proud nation. We’re very proud of our rugby. It’s one of the big sports that has been able to unite the country.

“[It’s a] tough challenge that we get laid on us as South Africa, but the pressure we put on ourselves as Springboks is much more pressure than anyone else puts on us.”

A cup called Bill
Habana, like his teammates over the weekend, said the Springboks had undergone gruelling final preparations following their last Tri-Nations encounter — an 18-5 victory over the All Blacks in Port Elizabeth.

“We did quite a bit of training and after the Tri-Nations we had to refocus our energy and work on a couple of areas in our game plan that needed to be addressed,” he said.

“The coaching staff and conditioning staff definitely did not hold back in our training the last couple of weeks.”

Habana expected that preparation would hold the Springboks in good stead for their Pool D clashes, starting against Wales in Wellington on September 11.

“After our game against New Zealand a couple of weeks ago all of the focus went on the World Cup and on Wales,” he added.

“[They are] a tough unit that we definitely respect and a great challenge for us. The Welsh are very passionate and one of the most fiery sides in world rugby, and they bring a good challenge to the table.

“We can’t look any further than Wales. Everyone knows that the way you want to go forward, you build and have to win seven games if you want to win that little cup called Bill.”

Maori welcome
The Springboks received a resounding Maori welcome on Monday at the Wellington Waterfront that marked the official start of World Cup festivities in New Zealand’s capital.

In a sign of respect skipper John Smit picked up an object called the teka which signalled that the team accepted the challenge and that they came in peace.

“Thank you very much, it has been overwhelming, both leaving South Africa and arriving here in New Zealand,” said Smit.

“The bulk of the team have been thankful for the way we have been received and we will need to embrace Wellington as our home for the next two or three weeks and hopefully come back here in a few weeks time [for the quarterfinals].”

Proceedings started with the defending champions marching from their hotel in the city centre where they were greeted by a small group of South Africans fans.

One to remember
Once the team reached the picturesque waterfront the first thing they heard was the sound of paddlers doing a traditional Waka or water Haka.

“It has been an incredible journey and it doesn’t matter whether it is your first, second or third World Cup it is the last one you would like to remember most of all.

Smit highlighted that it was his fourth trip to Wellington this year and joked that he probably knew his New Zealand cellphone number better than the one he uses at home.

The team also received their official Rugby World Cup caps while they chose the South African national anthem as their song of choice — a Maori tradition — after listening to a kaikorero welcome creed.

“It is my forth year as the South African coach and my forth year that I’ve come here and I am already an honorary Maori. But I have an honorary citizenship of Wellington too so I will look after our city the best that I can.”

“To my boys, there are 50-million people in our hearts and a great responsibility that comes with it in what may be the greatest event of our lives.” — Reuters, Sapa