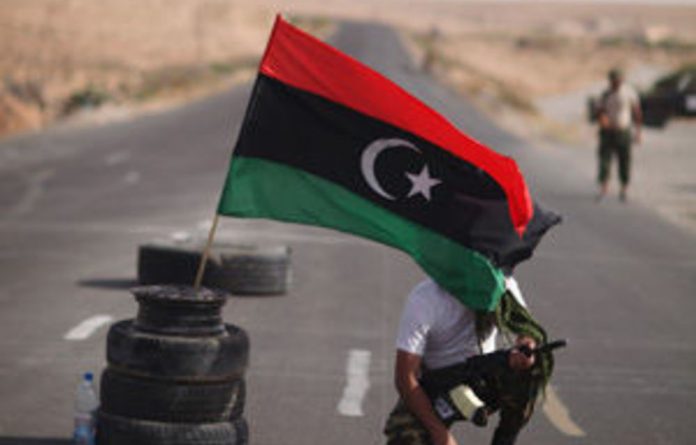 Scores of Libyan army vehicles have crossed the desert frontier into Niger in what may be a dramatic, secretly negotiated bid by Muammar Gaddafi to seek refuge in a friendly African state, military sources from France and Niger told Reuters on Tuesday.

A convoy of between 200 and 250 vehicles was given an escort by the army of Niger, a poor and landlocked former French colony to the south of Libya. It might, according to a French military source, be joined by Gaddafi en route for neighbouring Burkina Faso, which has offered him asylum.

It was not clear where the 69-year-old former leader was. He has broadcast defiance since being forced into hiding two weeks ago, and has vowed to die fighting on Libyan soil.

His son Saif al-Islam, heir apparent before the uprising which ended his father’s 42 years of personal rule, also was considering joining the convoy, the French source added. France played a leading role in the war against Gaddafi and such a large Libyan military convoy could hardly have moved safely without the knowledge and agreement of Nato air forces.

Sources told Reuters that France may have brokered an arrangement between the new Libyan government and Gaddafi.

But a spokesperson for the French foreign ministry in Paris could not confirm the report of the convoy’s arrival in the northern Niger desert city of Agadez nor any offer to Gaddafi, who with Saif al-Islam is wanted for crimes against humanity by the International Criminal Court at The Hague.

Asked about reports of a military convoy crossing into Niger, Jalal Al-Galal, a spokesperson for Libya’s National Transition Council (NTC) in Tripoli, said: “I still cannot confirm anything on this.” Officials in other Western governments were not immediately available for comment.

The sources said the convoy, probably including officers from army units based in the south of Libya, may have looped through Algeria rather than crossing the Libyan-Niger frontier directly. It arrived late on Monday near Agadez, deep in the Sahara. Algeria last week took in Gaddafi’s wife, daughter and two other sons, angering the interim council now in Tripoli.

Bani Walid
Nato warplanes and reconnaissance aircraft have been scouring Libya’s deserts for large convoys of vehicles that may be carrying the other Gaddafis. It is unlikely it could have crossed the border without some form of deal being struck.

Libya’s NTC has said it wants to try Gaddafi before, possibly, handing him over to the International Criminal Court (ICC), which has charged him and Saif al-Islam with crimes against humanity.

Both men had been said by NTC commanders last week to be in the tribal stronghold of Bani Walid, 150km south of Tripoli. But that belief seemed to have evaporated this week after days of blockade of the town.

NTC officials said Saif al-Islam, for one, may have escaped south into the desert, toward Niger.

In what might be an indication that high-level figures are no longer in the town, following on-off negotiations with tribal elders, the NTC negotiator said he was still hoping for a peaceful surrender to avoid further bloodshed.

“Preliminary agreement has been reached but we’re still waiting to see if tribal leaders can convince the Gaddafi brigade to lay down their weapons,” chief negotiator Abdallah Kanshil said. “We have given them assurances that we will not take revenge. We hope that they will now surrender peacefully.”

“He is in a place that will not be reached by those fractious groups, and he is in Libya,” Ibrahim told Arrai TV.

Niger arrivals
The head of Gaddafi’s security brigades, Mansour Dhao, along with more than 10 other Libyans, crossed into Niger on Sunday, two Niger officials had said earlier on Monday.

The French military source said he had been told the commander of Libya’s southern forces, General Ali Khana, may also be in Niger, not far from the Libyan border.

He said he had been told that Gaddafi and Saif al-Islam would join Khana and catch up with the convoy should they choose to accept Burkina Faso’s offer of exile.

Burkina Faso, also once a French colony and a former recipient of large amounts of Libyan aid, offered Gaddafi exile about two weeks ago but has also recognised the rebel National Transitional Council as Libya’s government.

Burkina’s Foreign Minister Yipene Djibril Bassolet said that Gaddafi could go into exile in his country even though it is a signatory to the ICC treaty. President Blaise Compaore, like Gaddafi, took power in a military coup. He has run the country for 24 years.

Gaddafi has said he is ready to fight to the death on Libyan soil, although there have been a number of reports that he might seek refuge in one of the African nations on whom he once lavished some of Libya’s oil wealth.

Gaddafi has long made much of his origins among the peoples of the desert and having largely turned his back on fellow Arab leaders, most of them allied with his Western adversaries, he portrayed himself as a leader of the African continent.

The drama of a flight across the Sahara into friendlier lands further south might seem a fitting departure to many.

However, his spokesperson Ibrahim said: “We will prevail in this struggle until victory … We are still strong, and we can turn the tables over against those traitors and Nato allies.” – Reuters