It’s about the team, not my retirement, says Matfield 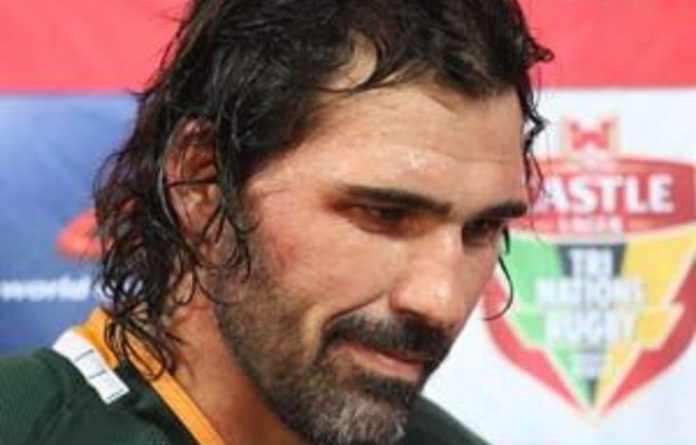 With plenty of time to prepare and acclimatise, the Springboks are eager to kick off their Rugby World Cup title defence against Wales on Sunday.

Victor Matfield insisted he was not spending that time thinking about what he would do when he retired after the tournament.

“I haven’t thought about that [retirement from rugby] yet,” Matfield said.

“We are all just focussing on the game and it has really been a long week. It feels like we can’t get to the game fast enough now.”

Early indications were that he might follow in Bob Skinstad’s footsteps, becoming a sports presenter, while his knowledge of lineout play would be also be a highly sought after skill.

“I think everyone just wants to get into the games now and we will handle all the personal stuff after the World Cup — now everything is about the team,” he said.

The biggest stage
Having already lifted the William Webb Ellis trophy once was not detracting from the great spectacle for Matfield, who, if declared fit to play this weekend, would extend his record as the most capped Springbok of all time to 107 caps.

Matfield was nursing a hamstring injury and a final call on his fitness would be made on Friday, although he said he was confident he would play.

“The World Cup is the biggest stage you can play on as a rugby player, so there will be a little bit of extra nerves, but every team has got that so it is just how you handle that and how you go out there and play,” he said.

In contrast to the Welsh, who underwent two gruelling pre-season camps in Poland, the Springboks used the Tri-Nations tournament for their fine-tuning.

Part of their plan to ensure all the players were fully fit by the time the World Cup kicked off, involved a group of 23 players being absent from South Africa’s away leg of the triangular competition.

During that time, they attended a rehabilitation camp in Phokeng, near Rustenburg, which meant, effectively, that the team had only two full dress rehearsals leading up to the World Cup.

Pressing defence
Matfield felt certain the approach the Boks took in their build-up was the right one.

“I think the preparation is very important,” he said.

“We have had a good three weeks together now as well so we just want to get to the game and start getting into it, and I think everything will then fall into place again.”

The big forward felt they had a good idea of what to expect from the Welsh side, the team with probably the best chance of toppling the Boks in the group stage.

“We all know they [Wales] have a hard, pressing defence and with that they compete very well at ruck time.

“That is something we have really been focussing on.

“We need to be accurate and we’ll also probably talk to the ref about that and see what we can do to keep them within the laws. That is something we want to sort out ourselves.” — Sapa