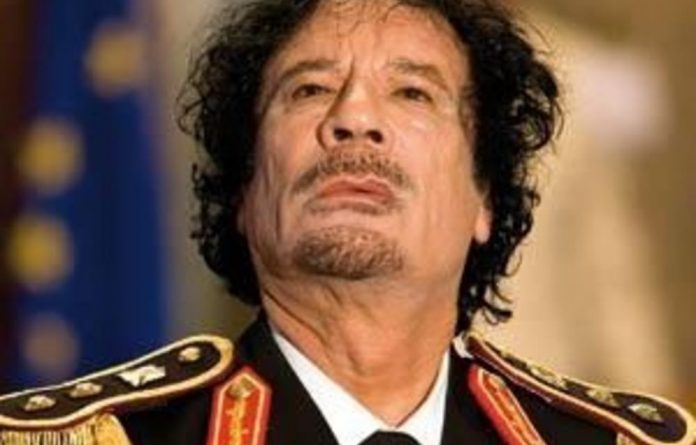 The hunt for Muammar Gaddafi has widened across Africa after Libyan army convoys crossed hundreds of kilometres of desert into neighbouring Niger, rumoured to be bound for Burkina Faso.

Tantalising clues of a possible escape route for Gaddafi filled the void created by the disappearance of the ousted leader whose face was ubiquitous in Libya for more than 40 years.

Reports of multiple convoys fleeing to Niger with looted gold and cash also suggested that the will of regime loyalists was failing and their last pockets of resistance in Libya could be near collapse.

Details of the size of the convoys, and who was in them, were scarce as they made their way across the vast swath of Sahara with more than 1 600km between any populated areas on the two sides of the border.

But military sources from France and Niger told Reuters that a convoy of between 200 and 250 vehicles from Libya was escorted to the northern city of Agadez by the Nigerien army. Amid speculation about a possible South African-brokered deal to allow Gaddafi to go free, there were rumours he might join the convoy en route to neighbouring Burkina Faso, which has offered him asylum.

Guma el-Gamaty, the London representative of the National Transitional Council (NTC), said that Gaddafi could already be in Niger but admitted there was no certainty about his whereabouts.

US and British officials said they were sceptical about claims the deposed leader had already left Libya. In London, Foreign Office sources described difficulties in communications — Britain does not have embassies in either Niger or Burkina Faso — amid swirling rumours about events in the remote Sahel borderlands.

Gaddafi has courted poor African nations in recent years and used Libya’s oil wealth to buy influence at the African Union. He is believed to have financed the Tuareg rebellion in the north of Niger and remains popular in towns such as Agadez, where a majority of the population is Tuareg.

Burkina Faso, a former recipient of large amounts of Libyan aid, offered Gaddafi sanctuary about two weeks ago even though it has signed the international criminal court treaty requiring it to hand suspects to The Hague.

France, Niger and Burkina Faso, along with the NTC and Nato, all denied knowing where he was or of any deal to let him go abroad or find refuge. Niger’s foreign minister, Bazoum Mohamed, was quoted by al-Arabiya television saying that Gaddafi was not in the convoy, which arrived late on Monday. An aide to the French president, Nicolas Sarkozy, said: “We have no specific information that would indicate that Gaddafi is there.”

But those comments did not contradict a French military source who claimed the 69-year-old fugitive and his son and heir Saif al-Islam might join the convoy later to head for Burkina Faso.

The unnamed source told Reuters he had been informed that the commander of Libya’s southern forces, General Ali Khana, may also be in Niger, not far from the Libyan border. He said he had been told Gaddafi and his son, Saif al-Islam, would join Khana and catch up with the convoy should they choose to accept the offer of exile.

The sources said the convoy, probably including officers from army units based in the south of Libya, may have looped through Algeria rather than crossing the Libya-Niger frontier directly. Algeria last week took in Gaddafi’s wife, daughter and two other sons, angering the NTC.

A spokesperson for the NTC described a convoy carrying gold and cash, including banknotes from the Central Bank of Libya branch in Sirte, Gaddafi’s birthplace that remains loyal to him. An NTC official, Fathis Baja, told Reuters: “Late last night 10 vehicles carrying gold, euros and dollars crossed from Jufra into Niger with the help of Tuaregs from the Niger tribe.”

Tuareg nomads who inhabit the Sahara across frontiers say those fleeing Libya include many black Africans, some of whom may have been fighters for Gaddafi and now fear anger and reprisals.

Officials in Niger have said the head of Gaddafi’s security brigades, Mansour Dhao, along with more than 10 other Libyans, crossed into Niger on Sunday.

Meanwhile Abdoulaye Harouna, owner of the Agadez Info newspaper, told the Associated Press several dozen pick-up trucks had arrived on Monday, led by the Tuareg rebel leader Rissa ag Boula, a native of Niger who sought refuge in Libya and was believed to be fighting for Gaddafi.

Gamaty warned that Niger would be penalised if it was found to have helped Gaddafi escape. “Niger is a neighbour of Libya from the south and should be considering the future relationship with Libya,” he told the BBC. This — if confirmed — will very much antagonise any future relationship between Libya and Niger.”

Nato appeared to deny suggestions that it had deliberately refrained from attacking a large convoy or convoys reported to have crossed the border.

“Nato continuously receives reports from various sources regarding weapons, vehicles and even convoys of vehicles moving throughout Libya,” said spokeswoman Oana Lungescu. “We do not discuss the intelligence and surveillance information we collect, but we do publicly announce actions we take when we act on threats to the civilian population. Our mission is to protect civilians, the civilian population in Libya, not to track and target thousands of fleeing former regime leaders, mercenaries, military commanders and internally displaced people.”

Gaddafi has broadcast defiance since being forced into hiding two weeks ago, and vowed to die fighting on his own soil, although only three major Libyan cities remain under his control — Bani Walid, Sirte and Sabha.

His fugitive spokesperson Moussa Ibrahim said by phone on Monday: “Muammar Gaddafi is in excellent health and in very, very high spirits … he is in a place that will not be reached by those fractious groups, and he is in Libya.”

Both Gaddafi and Saif al-Islam have previously been said to be in the tribal stronghold of Bani Walid, 144km south of Tripoli. But that belief has evaporated after days of blockade of the town.

NTC negotiators continued to press on Tuesday for a peaceful surrender in Bani Walid to avoid further bloodshed. They met four local clan leaders at a televised parley in a mosque in Boshtata, 48km from the town.

The clan leaders said the majority of Bani Walid’s population were ready to surrender but the rest feared reprisals, in particular against 63 Gaddafi loyalists named on a wanted list. They told the meeting of rumours circulating in Bani Walid that the rebels were going to rape the women of the town and kill people.

The rebels offered a temporary amnesty to loyalists and ordered that a local radio station, accused of spreading alarmist propaganda, be shut down.

Mahmoud Jibril, prime minister of the NTC, joined the talks by telephone on loudspeaker, promising to restore food, water and power supplies while protecting civilians. “This is a real chance for Bani Walid to show its real face to the world, to enter the history of Libya,” he said.

As the participants emerged, rebels sang and fired into the air in celebration. Moftha Bagol, a mediator from Bani Walid, said: “Around 90% of the people there are against Gaddafi. A few are still refusing because they have been involved in killing and bloodshed and are scared something will happen to them later.

“But we are determined to persuade them. With god’s help we hope to convince them that we are all brothers.”

Hours later, sources in Boshtata suggested that the attempt had not been a success and the stalemate continued.

Near Sirte there was the first sign of heavy fighting for some days. Combatants reported exchanges of shell fire and rockets to the east. – guardian.co.uk