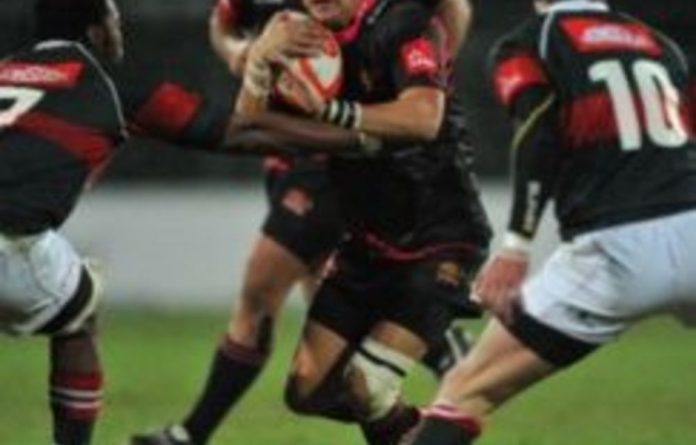 A brace of late tries by Jacques Botes spared the Sharks’ blushes as they secured a narrow 33-20 Currie Cup victory over a brave Pumas side in Durban on Saturday.

The visitors led for most of the game thanks to Coenie van Wyk’s 17-point haul, which included two tries and some sloppy play from the home side.

They ran out of steam towards the end, allowing the defending champions to run out victors at Kings Park, a win that leaves them six points behind runaway leaders the Lions and well placed to push on for a home semi-final.

The Pumas began brightly and should have done more with their early domination as Tiaan Marx sent over a penalty and van Wyk missed another.

The men from Mpumalanga continued to dominate until the 10th minute when they lost the ball on the halfway line and Keegan Daniel managed to win a penalty, which he quickly took and offloaded to Craig Burden, who powered over for a third try of the season.

The visitors refused to lie down and responded four minutes later when Marius Coetzer and JW Jonker combined well to send Van Wyk in under the posts for an easy try.

After van Wyk converted, the home side began to settle a little more, although errors continued to hamper them.

Sloppy pass
Just before the half hour mark, Stefan Terblanche missed touch from a routine penalty and when the ball was won back, Dale Chadwick threw a sloppy pass that was intercepted by van Wyk who ran untroubled to secure a second try from his own 22.

Frederic Michalak then missed a penalty, before the Sharks finally managed a solid attacking move that ended with Jean Deysel powering his way in for a try on the right corner after a clever dummy.

Moments before the break, van Wyk should have completed his hat-trick but knocked on with the goal line beckoning after another error from the home side.

Nonetheless, the Pumas led 17-14 at the break and after the restart van Wyk stretched the lead to six points with another penalty.

The Sharks replied with a try from Anton Bresler, which came after several phases, as the replacement lock went over on the right.

Michalak missed the conversion and a subsequent penalty to keep the crowd on the edge of their seats, with their team trailing by one and less than 20 minutes remaining.

An overlap try then saw Botes go over on the right as John Plumtree’s men led for the first time after Michalak converted.

Seven minutes from the end, replacement loose forward Botes was again on hand to force his way over after good work from the backs, denying the Pumas their first win of the competition. — Sapa